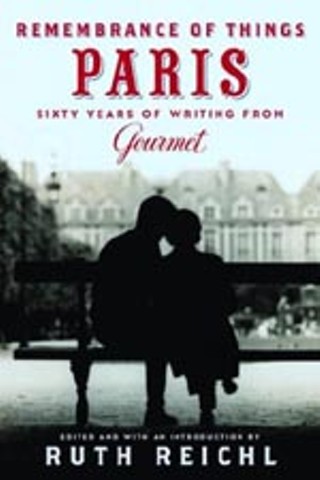 Remembrance of Things Paris: Sixty Years of Writing From 'Gourmet'

There is no city on Earth that can inspire more culinary literature than Paris, and Gourmet magazine has embraced that inspiration since the magazine's inception in 1941. What a dreadful year to be striking out with a new magazine that takes an adventurous interest in food, wine, travel, and restaurants! Despite the times, the magazine thrived, and much of that initial (and later) success can be laid at the feet of its early contributors. M.F.K. Fisher, Robert P. Tristram Coffin, and Ray Bradbury are but a few of the exceptional authors whose bylines could be found within its pages. While Paris was no place for lovers of good living to be nosing around during the early Forties, Gourmet wasted no time in getting writers there tout de suite after the war, and they've been there ever since, chronicling the cafes, food purveyors, houses of couture, night life, and boulevards of Paris. This excellent collection of essays spans postwar Paris through the first couple of years of the 21st century. It is an evocative series of literary snapshots of Paris as it transforms itself from a tattered city in the throes of postwar austerity to its resurrection to its rightful place as the epicenter of food and love. The lion's share of essays is from Joseph Wechsberg, and rightly so: He spent a great deal of time there in the middle of the 20th century, and his writing is witty, poignant, funny, profound, and observant. Through this collection we're reminded that Paris is defined as much by what it has inspired in wonderful scribes as it is by the elements that did the inspiring in the first place.