Elegance Out of Town

Fine-dining restaurants are appearing more frequently nowadays in small towns near and around Austin. Places like Wild Horse Grill in Marble Falls and European Bistro in Pflugerville come to mind right away as excellent dining destinations in areas where old-timey diners and national chain restaurants were, until recently, the only options for dining outside the home. Round Rock jumped on the scene with Main Street Grill in 1999, and thanks to its success, owners Monica and Jim McKinney opened a new spot in Georgetown in November 2003.

Monica's 701 sits on the northeast corner of Georgetown's main square, a quaint yet eclectic array of bookstores, gift shops, cafes, bed & breakfast inns, and restaurants that surround the Williamson County Courthouse. Monica's is housed in a beautifully restored, historic two-story building dating back to 1900 that was originally built for the Masonic Lodge. After many other incarnations through the years, it has settled nicely into its new role as a restaurant.

Inside, the decor is modern and clean, with white tablecloths and candles on the tables and in booths. The room is divided by a custom-made, temperature-controlled wine cellar with beautiful glass and iron decorative features and capacity for 600 bottles. Monica's has a very complete wine list, in all price ranges, as well as excellent cocktails. Upstairs is another sitting area with a bar and a great balcony where one can sit and enjoy a meal while contemplating the goings on about town. Overall, the feeling is comfortable and relaxing.

The menu at Monica's is contemporary American with a decidedly Texas slant, and the dishes encompass the many ethnic influences in the cuisine of the Lone Star State. About 40% of the menu items come straight from Main Street Grill, and were developed by executive chef Jim McNeil and Monica McKinney. For Monica's, McNeil recruited talented sous chef Michael Eskoff and his wife Julie, catering director, to help develop new items for the menu and run the restaurant. The Eskoffs have many years of experience in Austin kitchens, and Michael worked for many years with McNeil at Austin Country Club. Together, the three have created a new style at Monica's, adding menu items with Italian and French flair to the Southwestern-, Mexican-, and even Asian-influenced cuisine already popular at Main Street Grill.

Our first visit to Monica's was on a Sunday for brunch. The menu features such "traditional" brunch items as eggs Benedict, omelets, and migas, but with interesting twists like ancho chili hollandaise and chipotle cream gravy. Their alternative versions of traditional dishes, like the Pecan French Toast and the Cornmeal Pancakes, both served with ancho maple syrup, were very tempting. In the end, I settled for the Smoked Salmon Eggs Benedict ($11.95), two perfectly poached eggs atop toasted English muffins, covered with thin slices of lox, smoked mozzarella, and a lemon pepper hollandaise sauce, while my companion had the savory Florentine Omelet ($7.95), filled with generous amounts of spinach, mushrooms, onion, Gruyère cheese, and topped with traditional hollandaise. Both came with a choice of Hill Country hash browns, golden brown cubes of potatoes with crispy onion bits, or Mike's black beans, and a bowl of fresh fruit with honey yogurt dressing. The black beans were well spiced and salted, and had the added surprise of diced nopalitos, which gave the dish a nicely crunchier texture. We washed it all down with refreshing mimosas ($6) and made the drive back to Austin happy and satisfied with our meal.

Monica's serves lunch Tuesday through Saturday, 11am to 2:30pm, and a Sunset Menu from 5 to 6pm, Tuesday through Thursday as well as Sunday, offering a limited selection of items from the dinner menu. They also serve half-price appetizers, at the bar only, during happy hour from 5 to 7pm those same days. The dinner menu offers many different options, from the traditional to the exotic, which makes it easy to please everyone's tastes. This makes it an ideal place for family dinners or visiting relatives, in case Aunt Lola is not an adventurous diner but Uncle Julio just has to have escargot.

We returned to Monica's for dinner. Our young waitress was polite, enthusiastic, and well-informed, offering suggestions gladly without being pushy. We ordered a bottle of the MacMurray Ranch Pinot Noir ($28), thinking it would be versatile enough to complement whatever dish we wanted to order, then settled in to consider our choices. We started with the Crab Cakes ($10.95), which were of a good size and a great ratio of crabmeat to breadcrumbs. They were served with an excellent roasted garlic aioli, which tasted garlicky and freshly made as opposed to "aioli" that is merely commercial mayonnaise with flavoring added. We followed with the Farmers' Market Salad ($5.95), an unusual array of organic greens, shaved red onion, toasted pumpkin seeds, generous goat cheese dollops, and thick slices of cornmeal-coated fried green tomatoes, served with a tangy, slightly sweet raspberry vinaigrette on the side. The combination of flavors and textures was an absolute winner. Also available is the Main Street staple Monica's Salad ($6.50), made with romaine and organic greens, fresh strawberries, candied pecans, and crumbled blue cheese, served with their signature maple balsamic vinaigrette.

Entrée decisions took a while, as many of the dishes piqued our curiosity. In the end, we followed our waitress' advice and went for the Crab Stuffed Shrimp ($21.95) and the Asian Seared Venison Medallions ($28.95). The crab-stuffed shrimp were baked and set in a smoked tomato chive butter sauce, accompanied by herbed risotto (molded in a pyramid shape for added eye appeal), and lightly sautéed fresh vegetables. The smoked tomato butter was delicious, but we felt a little redundancy in our choice, since the crab stuffing appeared to be the same mixture that we had already had in the crab cakes. Regardless, it was a very nice dish. Next time, we'll try the grilled lamb chops with balsamic mint jus instead, which also sounded enticing.

The Texas-raised venison medallions were more like chunks, but they were nice and medium rare, as I requested. The venison was lightly marinated in Thai spices, with nice hints of star anise and chile, and served over a blackberry demi-glace drizzled with wasabi essence. The demi was a bit sweet, but it had a very agreeable fresh blackberry taste, and the slightly bitter heat of the wasabi mitigated the sweetness and added a very pleasant bite. Both flavors complemented the venison very well. Instead of the grilled pepper-jack polenta that the menu described as a side dish, we got the honey garlic roasted new potatoes, which were good nevertheless. When I questioned the waitress about the change, she gladly went back to the kitchen and returned with the polenta. I was glad because it was, in my opinion, a better accompaniment to the dish and rather delicious in its own right.

We were plenty satisfied thanks to the generous portions of the entrées, but we couldn't leave without trying one of their desserts. And although the Brandied Cherry Crème Brûlée ($6.95) with almond biscotti sounded appealing, we just had to have the White Chocolate Bread Pudding ($6.95), served warm with a delicious bourbon butterscotch and cinnamon crème anglaise. It had great consistency, big chunks of white chocolate, and the butterscotch was divine.

Overall, my impression was very positive. Downtown Georgetown has a nice small-town feeling, and a good locally owned restaurant like Monica's adds elegance and a sense of permanence rather than a transition to a strip-mall mentality as is common in suburbia. It is good to see that neighboring small Central Texas towns are becoming destinations for good dining. Hopefully this will boost their economy and create much-needed jobs for local residents. And dining at Monica's makes a visit to Georgetown all that much better for Austinites, as well. 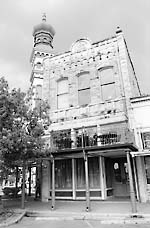