Eat, Drink, and Be Merry 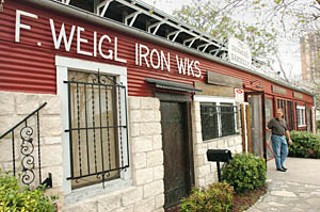 Thursday’s Big Bad Barbecue-and-Beer Bus Bash will include a stop at the Iron Works, among many others. (Photo By John Anderson)

For the past few weeks, writers in other sections of this paper have shared their opinions about the cutting-edge discoveries in interactive media, the most controversial documentaries, the must-see independent films, and the visiting bands that were just not to be missed. Meanwhile, the Food section had to wait our turn until this week, when the Saveur Texas Hill Country Wine & Food Festival kicks off today, Thursday, April 1, and runs through Sunday, April 4.

Now in its 19th season, the festival is in its second year of a joint venture with Saveur, the food magazine dedicated to the exploration of food and wine as integral components of cultures around the globe. The festival board could not have landed a better partner. Saveur has added pizzazz, to be sure: Big magazine spreads and splashy New York media celebrations of Texas foods and wines have certainly raised the festival's national profile. They've attracted celebrity chefs from all over the country. But more than that, they've inspired a new outlook, encouraging the festival to play to the strengths of our region – an abundance of great barbecue and other delectable regional foods, fine wines emerging from the Texas terroir, Austin and the Hill Country as dynamic destinations, all of it well seasoned with one of Austin's most famous exports, live music. This year's event is titled "Farm to Market: Coast to Coast" and even at this late date, you should still be able to savor some tasty offerings. Here's the hot dish on what Wes Marshall and I suggest for the weekend. Hurry on down to the festival registration desk at the Four Seasons for last-minute ticket sales to individual seminars, tours, and tastings. – Virginia B. Wood

The Big Bad Barbecue-and-Beer Bus Bash, 11:30am-3:30pm: If you're reading the paper as soon as it hits the streets on Thursday, you just might have time to make it to the Four Seasons before the barbecue bus caravan departs promptly at 11:30am. Seems Saveur was so impressed with the barbecue tours we sponsored in 2002, they've added a tour component to the festival this year. We couldn't be prouder. New York barbecue restaurateur Danny Meyer heads up the tour to Taylor and Elgin; Houston Press restaurant critic Robb Walsh leads the tour to Lockhart, Luling, and Gonzales; and East Austin native son Hoover Alexander and I will show folks some of Austin's finest barbecue joints. Fifty dollars gets you all the beer, food, and fun you can handle.

Edible Endings: Desserts and Dessert Wines, 3:15-4:15pm: As a baker by trade, I've made no secret of my opinion that pastry chefs and desserts were given short shrift by the festival for years. This delicious event goes a long way toward solving that problem, and I really hope that fest goers will support it. Hilton pastry chef Katherine Clapner has put together a stellar lineup of pastry chefs and dessert makers from around Austin and the state. This party in the Sixth Street lobby of the Driskill Hotel will showcase their sweet creations complemented by dessert and fortified wines from Texas wineries and visiting vintners. $45 for your sweet tooth.

Food Critics: Do We Really Need Them?, 11:15am-12:15pm: This discussion at the Intercontinental Stephen F. Austin could be a big snore or a rollicking good time, depending on who shows up to ask questions of and kibbitz with the esteemed panel moderated by Saveur Editor Colman Andrews. Dallas Morning News restaurant critic Dotty Griffith, restaurateurs Danny Meyer and Drew Nieporent of New York City and Skeeter Miller of Austin, former New York Times food critic Mimi Sheraton, Houston Press restaurant critic Robb Walsh, and I will be on hand to field your inquiries. Twenty-five dollars gets you the opportunity to put in your 2 cents.

Local Flavors: From Farm to Market to Table, noon-2pm: Award-winning cookbook author Deborah Madison will host this tasting event arranged by Westlake Farmers Market manager Pamela Boyar in the parking lot of the trendy SoCo hotspot the Hotel San José. Area farmers are matched with visiting celebrity chefs from around the country, and marvelous local flavors should be the result. Pairing chefs with growers is Boyar's specialty. This tasting is one of the best deals of the weekend and should not be missed. Live music by Kimmie Rhodes. $45.

A Grab for Wine, Land, and Love: Five Couples Who Built Wineries, Appellations, and Lives Together, 11am-12:15pm: If the romance of wine attracts you, attend this seminar at the Four Seasons to meet five delightful couples thriving in the wine business, and taste the wines that are the results of their romances. $45.

Home on the Range at the TDS Exotic Game Ranch, 1-4pm: Couldn't be happier to see this event on the schedule again this year, as it was the coolest thing last time around. Don't miss the opportunity to visit the TDS game ranch, which is not ordinarily open to the public. There will be a skeet shooting competition with Dotty Griffith defending her title; a bourbon tasting with Michael Bonadies and Ann McCarthy; a wine tasting with Joshua Wesson; and delectable wild-game dishes prepared by the likes of Bobby Flay, Steve Raichlen, Kenny Callaghan, Chris Lilly, Jeff Blank, Grady Spears, and Robert McGrath; plus an army of pit masters from Texas barbecue joints. This one is a sure winner. $75 plus $10 bus fare. – V.B.W.

Rare and Fine Wine Auction, 6:30pm: One of Austin's premier wine events and best parties happens again this Saturday, April 3, when the 19th annual Texas Hill Country Wine & Food Foundation offers its Rare and Fine Wine Auction. The event takes place at the Four Seasons Hotel at 6:30pm, and proceeds go partly to our favorite television station, KLRU, with the balance going to a scholarship for a deserving student in the culinary arts.

Wine lovers will go giddy over the selection of auction items. The auction catalog runs 62 pages long, and there are gems on nearly every page. The three chairs of the auction committee – Larry Peel, Michael Vilim, and Kent Lance – twist the arms of every major collector they know to acquire a collection of wines you hardly ever see in a store.

If I were a rich man, I'd buy the five-course dinner for 12 at Mirabelle along with matching wines from Guigal. I had the good fortune to be invited by last year's winner to a similar dinner, and it was one of the best food-and-wine experiences of my life. The prize wine for the dinner will be Guigal's 1998 "La Mouline" Côte Rôtie. This wine is rare, delicious, and very expensive. Whoever wins this auction will be in for a treat.

Another splendid auction item includes dinner and an overnight stay at the private guesthouse at Perrier Jouët. Besides having the opportunity to luxuriously loll around in Epernay, France, in the beautiful Champagne region, you also get a jeroboam (that equals four normal bottles) of their delicious Belle Epoque champagne. If France is too far away, founding Chairman Larry Peel and his psychiatrist (strict Freudian, if you please) wife, Deborah, will open their private wine cellar for a dinner prepared by the dependably brilliant chef Elmar Prambs of the Four Seasons. The wines will read like a who's who of the best from California and France.

I wish I could be a fly on the wall for Girls Night Out at 219 West for 10 happy women. First, a stretch limo will pick up the lucky winners and whisk them to 219 West. Then, owner Paul Silver, a man who knows how to throw a grand party, will fete the crowd. There will be drinks and tasty food, and the night will be capped off with Cristal champagne, strawberries, and Belgian chocolates. When the 10 women have had their fill, the limo awaits to carry them off into the night.

On top of all the auction fun, for the first time the auction will be serving food from five great chefs. Dan Silverman, longtime chef at New York's Union Square Cafe and current executive chef at the Lever House; Mark Peel, executive chef at Campanile in Los Angeles; Bob Waggoner from the Charleston Grill; Ryan Hardy from the Coach House in Martha's Vineyard and the Four Seasons' Elmar Prambs will be making a variety of delicious dishes. Several of the wines they will pour that night will also be notable (but head straight for the yummy Etude Pinot Noir).

Asleep at the Wheel fans will get a chance to meet Ray Benson, who will also be serving as a guest auctioneer. Auction fans should be sure to watch the masterful Doyle Fellers at work. He's one of the best.

This whole night of great food and wine, along with the electricity of an auction environment, costs money to stage and money to attend. Tickets are $125 each. In a restaurant, just the food and wine would run more than that. And the ultimate goal is to raise money for a couple of good causes. For more information and tickets, contact Rebecca Robinson, the executive director of the foundation, at 327-7555. – Wes Marshall

Saveur Texas Hill Country Wine & Food Fair: Salt Lick Bar B-Q Pavilion, noon-4pm: This event has the most crowd appeal and biggest attendance and, in some ways, it has become a victim of its own success. This year, the festival folks have hired an experienced event coordinator to address the entry and exit, parking and traffic problems that fairgoers have had to deal with in the past. They swear that parking will be better, access will be smoother and faster, and you won't have to take your life in your own hands on Camp Ben McCulloch Road just to get to the festivities. Once you're there, however, there will be a multitude of food, wine, and beer tastings; cooking demonstrations from the visiting celebrity chefs; and a gathering of authentic chuck wagons with cook fires blazing. You never can tell what new flavor you're liable to discover at the Sunday fair. $45 at the door/$15 under 21 years of age. – V.B.W.

Liquid Assets
Favorites From the Festival 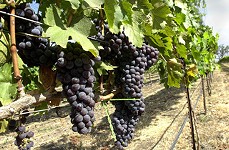