Green Pastures and the Broken Spoke: two old-timers getting better with age 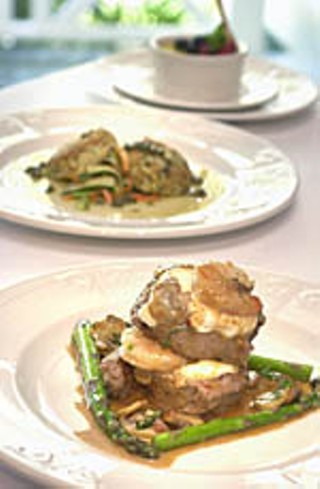 For almost 60 years now, Green Pastures has been one of the elegant-dining destinations in Austin. A history that lengthy comes with its share of burdens. The upside is atmosphere and a legacy that is emblematic of the city's heritage. The "More Than a Zip Code – a Way of Life" philosophy could well have been born in the shade of the live oak trees that grace the grounds. It was here that the Faulk family and, later, the Koock family were reared. That's Faulk as in John Henry, defender of the First Amendment and enemy of Sen. Joe McCarthy (higher praise is hard to imagine). Mary Faulk Koock, sister of John Henry, later reared her brood in the rambling house and, almost by accident, started the restaurant. Ms. Faulk was a legendary hostess, and her parties grew in size and reputation until she gradually started catering from the home, and from there the restaurant was born. The expected Southern charms of warm hospitality and a bounteous spread were present from the beginning, but none of the typical Southern horrors of segregation and discrimination. Almost 20 years before the law demanded and from the time paying guests were first welcomed, Green Pastures was open to people of all races. Jewish citizens celebrated bar mitzvahs and African-American Austinites commemorated weddings and graduations there. Governors, congressmen, and other dignitaries were also regular patrons. So where's the downside to such a legacy? In culinary terms it could mean stodgy, old-fashioned, passé fare. Recent dining experiences, though, put to rest any suspicions that the food remains stuck in the hazy past.

A quintessential "ladies who lunch" spot, my daughter and I stole an afternoon there recently. I knew she would be enchanted by the peacocks, the graceful grounds, and the turn-of-the-century building. We both were impressed with our meal. My 11-year-old tried the Sautéed Gulf Crab Cakes with julienne vegetables and lemon-caper butter ($16), and I opted for Goat Cheese and Artichoke Polenta with spinach, asparagus, balsamic, and a tapenade crostini trio ($10). The crab cakes were luscious and delicious and rich with clarified butter that was nicely spiked by the piquant citrus and capers. My polenta dish was likewise rich and deep, and the crostini held enough tapenade to make appetizers for four of us that evening! We instinctively held our backs straighter, dabbed the corners of our mouths, and were on our feminine best behavior. The lawns later provided room to romp and let out our repressed exuberance.

The dinner experience was an equally successful adult evening and the menu even more ambitious. We requested two champagne cocktails ($7 each) to begin, and although our server seemed unclear on the specifics of the drink, she assured me that she would research the recipe and present us with a proper drink. She did. Complete with sugar cube, bitters, and a twist, the cocktails were lovely. With the drinks came the evening's amuse bouche, a wafer-thin crostini spread with fresh horseradish sauce and a thin slice of rare beef tenderloin, which was simple, lovely, and rich. Our meal began with a shared appetizer: the Gulf Coast Starter, which includes shrimp, crawfish fritters, and crispy soft-shell crab with jerked molasses, tequila cocktail, and chipotle rémoulade ($15). It's a sizable dish that is best shared in order to allow room for entrées.

All the seafood was impeccably fresh and fried expertly – no grease, light, crisp, and whisked to our table while at its peak. The jerk and chipotle sauces were artistically zigzagged across the bottom of the plate in halves so that you could choose your preference for accompanying the seafood. Our salad choices were the Spinach with Danish blue cheese, bacon, tomatoes, radicchio, pistachios, and tobacco onions ($5.75) and the Field Green Salad ($5.25). The spinach salad is a robust, meaty salad that would make an ample lunch. The baby spinach that is now de rigueur is eschewed for the heartier and more mature curly spinach. With the addition of the generous and sturdy toppings, it's a salad my spinach-loving companion delighted in and carnivores would find satisfying. My field green choice was an equally successful lighter option beautifully presented on a plate flecked with beet confetti. Afterward, our palates were cleansed with a petite and tart sorbet of passion fruit and mango, which was beautifully balanced: not too sweet or too tart.

We moved on to our entrées of Seared Salmon with tempura asparagus, hibiscus reduction, and crawfish butter ($25) and Veal Stuffed With Shrimp, goat cheese, spinach, and sun-dried tomatoes in Courvoisier ($28). The salmon entrée was a stacked sandwich of salmon slices holding crispy fat asparagus spears and creamy rice on a pool of rich crawfish and hibiscus sauce. The overall pinkness of the plate was part of the loveliness of the dish – it was simply luscious looking. It was equally luscious tasting. The salmon was skillfully crisp and the tempura asparagus, too, was at its proper texture, which was even more remarkable considering it sat between fish slices. The luxurious sauce with its plump morsels of crawfish emphasized the origins of the dish with its briny bits in a silky, buttery bath.

My veal dish was almost as successful. Veal is a tricky meat that is easily overcooked or overwhelmed. Here, the meat was respectfully prepared and maintained its delicate moistness, and while the goat cheese and large shrimp delicately balanced the subtle flavor of the veal, the sun-dried tomatoes were too bold and nearly overwhelmed everything else, including the classically flavored cognac sauce. A lighter hand with the tomatoes, and the dish is an unqualified winner.

Although we couldn't finish our entrées and had them boxed up (where they made the following night's ample dinner) we managed to split the Grand Marnier Crème Brûlée ($5.50). The sugar topping shattered nicely, and though the custard was properly rich and eggy, the liquor addition was a bit heavy-handed and made for a somewhat boozy dish. My companion, however, loved it and thought the fresh berries that accompanied it offset the liquor taste nicely.

Service throughout the evening was adept and pleasant, but with this many courses, each of them individually plated on chargers, even three or four small tables can be too taxing for a seasoned professional, as our server clearly was. She could have benefited from additional support to replenish flatware quickly as it was used, to keep up with the water, etc.

Green Pastures probably doesn't have to work this hard to be successful. It has a well-deserved reputation as a most picturesque spot for weddings, receptions, brunches, and other festive occasions. If it maintained a solidly executed and conservative menu of old-fashioned "fancy foods" like steak Diane and such, it could probably rest on its fame and do quite nicely. But chef Charles Bloesma, in the spirit of intrepid founder Mary Koock, isn't content to let it rest on its charm. He doesn't seem to be shouldering the burden of Green Pastures' legacy as much as he's accepting the passing of the torch to take the restaurant into the new century. Bloesma clearly has ambitions for Green Pastures to take its place among the leading dining spots of Austin through its cuisine as well as its heritage. Again. Based on my experiences, I'd say he has fulfilled his ambition. 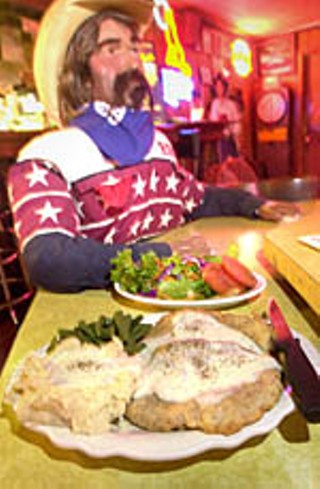 A billowing cascade of marabou feathers. A sleek swirl of black sunbursts against a stark background. A perky pillbox hat and a tray full of cigarettes for sale. A dapper tuxedo and shiny patent leather shoes. For those of us whose images of dinner and dancing were formed by the movies of the Thirties and Forties, these are the elements of the occasion. Outside of New York and L.A., did such environs ever really exist? I'll never know, but I do know that dinner and dancing have long been a staple in Texas. But Fred and Ginger are not likely suspects at these places.

I'm talking about the dance halls of Texas, of course. Places where, as a child, my mother would go with her cousins from the country, and families would set up blankets on the floor and bring their picnics. As the night wore on, babies would be bedded down upon the quilts and the grownups would keep sashaying to the bands' tunes. At more urban dance halls, dinner is provided. Like here in town at the Broken Spoke.

There is hardly a more pure form of dinner and dancing and all things Texas then to tuck into a chicken-fried steak and then scoot your boots along the well-trod floors of this South Austin institution. Located in what surely was an outpost in rural Austin in 1964, the Broken Spoke is now one of many businesses along the speeding thoroughfare of South Lamar. But turning into the unpaved dirt parking lot is the first step in getting away from modern urbania. Once inside, the journey is complete.

While there are not likely to be any penguin suits and Edith Head gowns in sight, there is plenty of style among the patrons of the Spoke. The regulars here are the real thing, not a bunch of hats, as you're likely to find at slicked-up dance halls along the interstate. Chances are there will be at least a couple of first-time visitors, maybe from far-flung places like Europe or Asia, too.

The ideal dinner and dancing drill here is simple enough: Set yourselves down in the front room and dive into a very credible chicken-fried steak. Their version is properly ample, crispy, and just the thing to sustain you for the next portion of the evening. For less hearty appetites there are burgers, enchiladas, and barbecue. So there's nothing exactly dainty on the menu, but you're not at the Rainbow Room, OK?

Fully fortified, it's time to head back to the dance hall and join in the circular dancing that's keeping time with the music. The patrons are as likely to be AARP sweethearts as rodeo princesses and their young bucks. Families are not uncommon either. Hipsters, city slickers, and musicians galore can all be found here. The Spoke is nothing if not friendly.

For the novice, the prospect of getting out on the dance floor can be a bit intimidating. It's not unlike teetering onto the roller rink in your unsteady skates as experts whiz by you skating backward and turning pirouettes. Actually, some of the same rules apply on the dance floor here. Stay to the outside by the rail if you're slow or a newbie; faster, flashier pros in the center. All are welcome to join in, though. You'll find none of the hyper attitude prevalent on the dance floors in downtown clubs here, which is an enormous source of relief when you're trying to woo your date.

There's hardly a more amiable place to take your date for an evening of real dinner, real dancing, and real romance. You are probably properly dressed right now, you don't have to take out a bank loan to cover the evening, and there's not a better excuse to hold your honey close than the one offered on this dance floor. 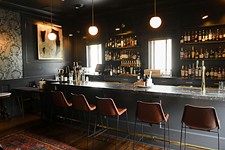 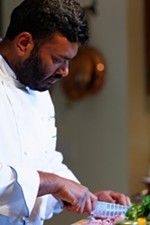