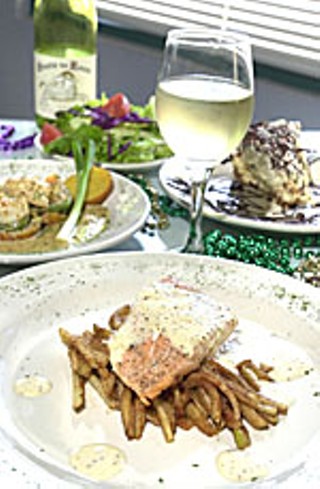 Austin loves a party – any party – in any season. We commemorate spring with a fictional donkey's birthday revel, laugh in the face of 100-degree August heat by slurping fiery hot salsas and cold beer, turn out by the thousands in Halloween costumes, usher in each New Year together on downtown streets, and dance our feet off to sensual Latin rhythms every February at Carnaval. Given our communal fondness for festivities, it stands to reason that Austin would embrace the celebration of Mardi Gras, the final blowout fete that is the culmination of the pre-Lent party season. Pre-Lent festivities vary in the different predominately Catholic areas of the world, but parties, parades, costumes, trinkets, drinking, dancing, and plenty of food are standard ingredients. Though Austin boasts a 27-year tradition of a Rio de Janiero-style, wild Carnaval dance party every February, complete with costumes and authentic Brazilian music, a true Louisiana-style Mardi Gras celebration has yet to firmly take hold in River City. Sixth Street is closed off for the event, and there have been some less-than-successful attempts at parades, but Austin's own true, definitive take on Mardi Gras has yet to really emerge. We do have more Cajun/Creole-inspired restaurants in Austin these days than we've ever had before, and most of them have something special planned in observance of the holiday. Interestingly enough, most of the Louisiana expatriates we interviewed spoke wistfully of re-creating the small-town, rural Mardi Gras celebrations of their childhood memories rather than the raucous, drunken brawl New Orleans Mardi Gras seems to have become in recent years. Maybe the key to a successful Austin celebration would be to focus on the food traditions? Here's what to look for in the coming week.

In anticipation of the date, Sixth Street will be closed to traffic Friday, Saturday, and Tuesday nights (Feb. 20, 21, and 24), and all the restaurants, clubs, music venues, and businesses in the entertainment district are ready to party. There will be lots of live music, plenty of beads and trinkets, and two longtime Sixth Street restaurants with a Louisiana flavor will be serving up traditional foods. At the Boiling Pot (700 E. Sixth, 472-0985), owner Dave LeBlanc will harken back to his family's Opelousas roots with a family-style crawfish boil all day on Tuesday. At Jazz (214 E. Sixth, 479-0474), they're kicking off the festivities on Friday night with great dance music from Zydeco Blanco, and will have Reckless Kelly on Tuesday night. Look for plenty of boiled crawfish by the pound and some off-menu specials, as well.

If you're in the mood for sophisticated Creole cuisine, make reservations at Ms. B's Authentic Creole Cuisine (8105 Mesa Dr., 372-9529), where chef/owner Brenda McGowan will prepare a four-course meal, complemented by wine pairings, for $55 per person. Reservations are necessary. All three Gumbo's locations (710 Colorado, 489-8053; 14735 Bratton Ln., 670-9642; 901 Round Rock Ave., Round Rock, 512/671-7925) are back under the direction of chef/owner Michael Amr and will be serving their regular Creole-inspired menu to Mardi Gras guests. The most mouth-watering menu we discovered in our research will be part of the Big Fat Reds on Fat Tuesday wine dinner scheduled at Fleming's Steakhouse (320 E. Second, 457-1500). New chef Erick Nixon will prepare a sumptuous four-course meal, paired with big red wines, plus slices of traditional king cake for all the guests. Cost is $85 per person, and reservations are necessary.

The more casual Cajun/Creole eateries around the city also have festivities planned. At Evangeline Cafe (8106 Brodie, 282-2586), owner Curtis Clarke will have Cindy Cashdollar and her band on hand for musical entertainment, and he's imported king cakes from Louisiana to share with his clientele. Guests who find the hidden "babies" in their slice of cake will win coupons for free meals. The folks at the Cypress Grill (4404 W. William Cannon, 358-7474) are hoping to create a family atmosphere, with plenty of beads and traditional Cajun dance music from Jean-Pierre & the Zydeco Angels. The menu will include Cajun-fried turkeys, lots of boiled crawfish, and plenty of cold Abita beer. The Old Alligator Grill (3003 S. Lamar, 444-6117) will be partying all day on Tuesday, 11am until after midnight, with a crawfish boil in their parking lot, face painting and a balloon artist for kids, and two live bands. At the Shoal Creek Saloon (909 N. Lamar, 474-0805), chef Bud George is planning a special Mardi Gras menu, with cochon de lait, fried turkey, and pork-sausage-and-shrimp jambalaya, with red beans and rice on the side. And on the Eastside, Gene Tumbs at Gene's New Orleans Style Poboys & Deli (1209 E. 11th, 477-6600) will offer his regular menu in addition to hosting a crawfish boil under a tent outside the restaurant, complete with live music. Let the good times roll!