Juan in a Million 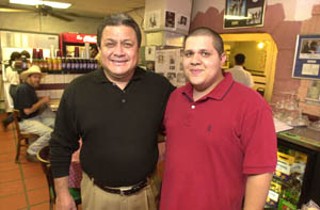 When I moved to Austin 12 years ago, one of the first restaurants my host took me to was a little Mexican place, painted all in pink, called Juan in a Million. I was instantly captivated by the no-nonsense decor, the comforting bustle, and the warm greeting of its owner, Juan Meza. At the time, Austin struck me as terribly suburban, yet this small eatery had all the authenticity of a true neighborhood joint. It was packed, cheap, and the owner wandered from table to table shaking hands and shooting the breeze with his customers. Things haven't changed much. Juan Meza still comes in almost every day to shake hands with his customers, and the crowds still roll in for breakfast and lunch. At a time when chain stores and franchises are proliferating as fast as runaway nanobots, it's good to know that a small family business can still thrive amid all of the corporate muscle. I visited Juan Meza at his restaurant to talk to him about his business and his place within the changing Eastside community.

When I arrived for the interview, Meza greeted me with his customary "Rachel, how are you?!" The staff there not only recognizes me, they even know what I order. Yet Meza was surprised to learn that, in fact, the Rachel he knew as a customer was the writer who had come to interview him (there's something to be said for the necessary anonymity of the food reviewer). We laughed at the unexpected and joked about old friends and acquaintances. Meza still remembers the time when I lived around the corner, and my South African-accented roommate and I would come in almost daily for tacos. "Everyone at the restaurant knew that accent. We didn't even have to write her name when she called and ordered. Pa-taay-toes," he says mimicking my old roommate's unmistakable speech.

As we spoke, Meza interrupted our discussion periodically with a hearty "Hello, how's it going?" aimed at passing patrons. Some of the patrons came up to our table to shake his hand. Many were old friends and business associates, while others were just regulars who had become familiar through time. "Juan, let's talk when you're done there," said one man as he passed on his way out to the back porch.

"Someone from the DA's office," replied Meza.

"What does he want to talk to you about?" I inquired, a little unsure about how invasive to be.

"Oh," said Meza nonchalantly, "he probably wants to talk to me about a political issue or someone who may be running for office." The fact is that in his 23 years in business, Juan Meza has come to know just about everyone there is to know in Austin. The Mezas' active support for various politicians and candidates has been important to many campaigns in recent years, among them Gus Garcia's and Raul Alvarez's (their political support actually spans party lines). Moreover, it has made their restaurant, Juan in a Million, a central part of the East Austin community. With a personal greeting for everyone and a handshake to shame a politician, Meza's warmth and friendliness have become emblematic of his business.

Juan Meza and his wife, Myrna, came to Austin from Laredo in the Seventies. Austin ISD recruited them as teachers for their fledgling bilingual program. But at that time, the pay was so bad for teachers that the two could barely make ends meet. Both first generation Mexican-Americans from working-class families, Juan and Myrna Meza were eager to transform their lives and make themselves financially secure. Myrna started working as a waitress in a friend's Oak Hill restaurant, while Juan washed dishes. After a few years, the couple heard about a restaurant space that was for sale on East Cesar Chavez Street and rushed to buy it. They named their new business Juan in a Million.

At first the Mezas did everything -- cooked, waited tables, bussed, washed dishes. But as their business grew, they hired people to help them. Many of those people are still with them today. In fact, one of the things that makes Juan in a Million unique among restaurants is that in an industry known for its volatility and high turnover, the staff at Juan in a Million has stayed relatively consistent. The current waitstaff has been nearly the same for almost 10 years. "We have one cook who has been with us for 18 years, another for 16 years. Eighty percent of our people stay with us for five years or more. It helps make the restaurant run smoothly." These days, Juan and Myrna don't have to do a lot of managing. Today, Juan Jr. (Juanito, as they call him) helps manage the business, freeing Juan and Myrna from the burden of day-to-day operations. Juan Sr. now plays golf, oftentimes with his customers, while Myrna pursues volunteer work with schools and churches.

His business philosophy is this: The customer is always the most important. He values his customers' diversity. Juan in a Million has regulars of all sorts: businesspeople, attorneys, architects, government employees, musicians, and students. They are Hispanic, black, white, Asian, etc. They come to eat, meet, conduct business, or even to compete in the unofficial Don Juan taco-eating contest. (For the uninitiated, the Don Juan is a gargantuan taco groaning with eggs, potatoes, bacon, and cheese. Most people have to order a second tortilla to contain the filling. The current champion goes by the name of Nate Dog, and he's holding the line at 61é2.)

Meza makes a point of shaking everyone's hand and trying to visit everyone's table because he knows that there are virtually hundreds of Mexican restaurants in Austin. He wants to personally thank the customers who choose his restaurant over any of the others they could potentially go to. "I really appreciate everyone who walks through that door." Meza's customers know that, which is why (great Tex-Mex aside) they return year after year. Meza reminisced about a young man who used to come to the restaurant while a student at UT. Then, there was a long period of time when Meza didn't see him. When he returned a few years later, Meza inquired where he'd been, and the student replied that he'd been in law school at Harvard but had just moved back to Austin. "It's like that," he mused. "I see people grow up, go to school, get married, start families, and then come in with their kids. Like yourself," he adds, referring to my own trajectory over the 12 years I have been eating there.

But it's not just the customers that the Mezas care about, it is also their community, "because without it, we wouldn't have any customers." Juan Meza sees community as the key to his success and believes strongly in giving back to the neighborhood. The Mezas open their doors to church meetings, school functions, and political meetings. As former teachers, they strongly support education, particularly East Austin schools, both financially and in practice. Though the family has never lived in East Austin, Juan and Myrna sent their two children to Metz Elementary, around the corner from the restaurant. "I wanted them to have a bilingual education," explains Meza, "and I wanted them to be a part of this neighborhood." Indeed, Juan Meza's investment in the East Austin community borders on devout.

Meza escorted me to the lot next door that he had just purchased. His excitement was evident as he described the plans he had for it. The Mezas hope to build a small plaza there ringed by boutiques. They envision shops that sell pottery and silver jewelry from Mexico. Their idea is to turn East Cesar Chavez into a shopping and dining corridor similar to what South Congress has become. Yet, they are also committed to preserving the ethnic flavor of the existing neighborhood, and hope to maintain the existing shops that surround them. It is a vision long overdue for East Austin.

By many standards, Juan in a Million's expansion has taken place with comparative baby steps. They occupy the same building they started in, with only minor additions. After 15 years, they opened an outdoor seating area and, shortly after, renovated an adjoining house for use as overflow indoor seating and for special events. "All of the improvements we have made have been done as we have been able to pay for it. We don't like to take loans. And we have always hired local tradespeople to do the work." They only recently acquired a liquor license, and after 22 years of serving just breakfast and lunch, they finally decided to open for dinner. The Mezas belong to an older generation of Eastside businesspeople, like Rudy Cisneros of Ciscos or the Guerras of El Azteca, who built dynasties from their single storefronts. Politically and socially connected, the businesses became staging areas for community meetings and business deals. They've built successful businesses by being part of their communities, and giving back to them whenever they can.

Since 1981, the Mezas have seen their East Austin community grow and change for the better, and it gives them pride to be a part of that change. When I asked Meza whether he ever thought of opening a second location or moving to a bigger, newer building, he laughed and looked perplexed. "Why? I have everything I need right here at this restaurant." 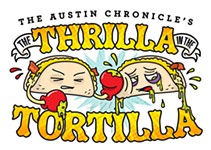 And the Winner Is ...
Juan in a Million remains an Austin classic