Can Kobe Japanese Steakhouse find a balance between the food and the fun? 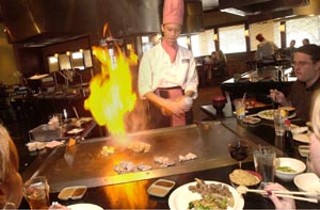 Kobe Japanese Steakhouse is a teppanyaki restaurant, of which the most famous example is Benihana. These places are aimed at theme-park type entertainment for the whole family, with tableside chefs slinging knives and banging spatulas in rhythm to the oohs and ahhs of the audience. We walked in on a Tuesday at about 7pm, and the place was jammed. The majority of the customers seemed jovial. Many thought the experience sufficiently fascinating that they had their video cameras out. We were informed that the wait would be about an hour, so we decided to go over to the very empty sushi bar and try out their fish.

The cardinal rule in sushi is to never eat it at a place with low turnover. An empty sushi bar means zero turnover, but a reporter has to report, so I decided to go ahead and try several of their offerings. The sushi chef, who was also the bartender, turned out to be a knowledgeable and generous purveyor of superb fish. We started with Escolar ($2.25; all sushi pricing is per piece), a tender and mild white fish that was deliciously fresh. Their Yellow Tail ($2.50) was similarly tasty. I was pleased to see that they also had beautiful, perfectly fresh Uni ($4.50). Since she was also the bartender, we tried a brandy and soda ($7), heavy on the brandy and large enough for Nick Charles. I went straight to the sake menu, hoping for a few surprises. Unfortunately, it is skimpy and overpriced. I ordered Sho Chiku Bai Ginjo Sake ($15 for a 6-ounce split, which is usually about $4.95 in shops). Not a great sake, but perfectly drinkable, even though they served it in a champagne glass. After about an hour, a table opened up, and we were seated.

Since Kobe seats six to eight folks at a table, they have to wait for a table to completely clear before you can be seated and meet your new friends. In our case, our tablemates were a bickering family. Our server for the evening came up and told us our "entertainment" (aka the chef) would be out soon and asked us what we wanted to eat. We ordered Gyoza ($4.95) and Yakitori ($4.95) for appetizers. For entrées, we ordered the house specialty: Hibachi N.Y. Steak and Teriyaki Chicken ($22.95). I then asked what seemed to be an obvious question: How come, in a place called Kobe, there isn't any Kobe beef on the menu? He stammered and went to the manager for help. When he returned, he told me they did have Kobe, and I could order it special if I wanted, for $45. I swallowed hard and ordered it.

When the waitperson came back, he offered water to everyone. Now, I hope this doesn't sound picky, but when he took the glasses from the tray to the table, rather than holding the glass around its outside between his thumb and the rest of his fingers, he stuck his thumb in the glass, into the water, and held the rim between his thumb and index finger. That, of course, assured all of us that we could have a mouthful of whatever his thumb had previously been in. I tried to get another server who was filling glasses to exchange the water for a new one, but my Spanish wasn't good enough to make him understand what I wanted. He brought our waitperson, who brought me a new water, with, again, his thumb in it.

Our appetizers arrived, except they were supposedly out of yakitori. That was hard to fathom, since yakitori is generally made from charcoal-grilled chicken, and chicken was available at nearly every table. I decided to just order a couple of pieces of sushi. The gyoza was recently frozen, and two of the pieces were still quite cold inside. Our server came over and put his tray down on the cooking surface, assuring that whatever was on the bottom of that tray would now make its way into our food. Next up was the salad and soup. The salad was very sweet and made with iceberg lettuce. When I was about two-thirds finished, the server asked if he could take my plate. I told him that I wanted to finish, which I did. I didn't try the soup since it, too, had been seasoned with our server's thumb. The server came back about 10 minutes later and asked if he could take my clearly empty salad bowl. I responded affirmatively. Then, he looked at the rest of the table and said, "Great. I just didn't know if you wanted to lick the bowl clean." His obvious search for comedy failed, and he left.

After another 20 minutes, our "entertainment" arrived. When he checked to make sure he had the right table, he found that he didn't and left for another slot. Our server was making nervous reassurances that the chef would soon arrive. As he was leaving, the mother in our group was getting very cold (they keep the temperatures down to combat the heat of the hibachis) and asked the server about warming the place up a little. He returned with a tablecloth and draped it over her shoulders. It looked a little odd, but she seemed somewhat relieved. I ordered another sake. The server told me they were out of my original choice and offered to give me what he called a better bottle of sake at the same price. I guess he assumed that I didn't know my sake. He brought the lower class (though also $15 on the list) Sho Chiku Bai sake. U.S. company Takara makes both, but the Ginjo is their Cadillac sake. He replaced it with a Chevy.

Our next chef showed up and tried to make sure he was at the right table. He had everything right except my Kobe beef. Frustrated, he left, and the rest of the table looked at me, one diner commenting graciously that she hoped the rest of the table would eventually get fed. The chef came back and made a fried-rice dish that was quite oversalted. He offered me a steak that he claimed was Kobe. The real thing is so fatty that it is almost white. My cut of beef was not quite as well-marbled as a "select"-grade New York steak. On top of that, Kobe beef should be cooked like foie gras: seared on the surfaces and served. Instead, they cut it up into little pieces and cooked it like a flat stir-fry. Our other dish was much better. The New York steak was juicy, and the chicken was also tasty. Alas, everything was oversalted. As soon as the chef was done making our meals, he proceeded to clean the griddle, which wafted the alluring aroma of burning terry cloth and bleach into the air as we ate our food.

A manager was making the rounds and asked whether we had enjoyed our meal. I stayed mum, but then she asked if I was the one that ordered Kobe beef. When I told her I was, she asked if I had enjoyed it. Trying to maintain an undercover identity, I said something innocuous: It was OK. She seemed surprised, so I bit and asked her if she was sure it was Kobe. She then explained that Americans don't like Kobe, since it is too fatty, so she buys lean Kobe. Lean Kobe is like a low-calorie hot fudge sundae -- why bother? Especially for $45.

But her statement made me think. Kobe Japanese Steakhouse strikes me as a place that really wants to please the customer. My guess is that they think their customers aren't very interested in foreign cuisine, and so they just try to make a fun experience. Kobe is not for people searching out fine Japanese gastronomy or a quiet romantic evening. It is for folks with different expectations -- searching for a cheery place to congregate with others looking for a fun evening. No one else seemed as concerned as I was over the cleanliness issues. The proof is in the large crowd of customers. They wanted dining as entertainment and they got a good dose of (rather expensive) fun.