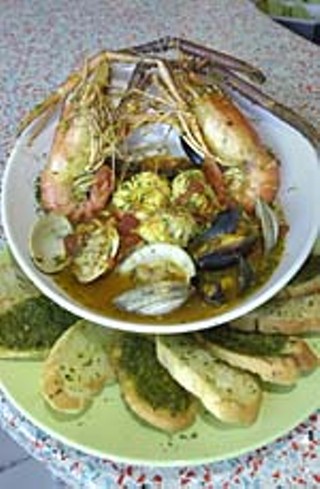 Chain restaurants' success lies in their ability to be absolutely identical in any locale: Your Chili's Baby Back Ribs in Indiana should be the equivalent to the platter you receive in Florida. Then there are regional restaurants, the ones that offer fare that is typical of a certain radius: Think Taco Cabana here in the Southwest or lobster huts in Maine. Then the focus tightens to places that are city-specific; the individually owned singular sensations. These are the places where the person behind the stove gets to set the agenda and whose efforts secure the success or failure of the establishment. In some towns, you can narrow the focus even more and find places that are specific to their neighborhoods or even streets. The South Congress Cafe is one such place that seems to be perfectly at home in its haunt but might seem out of place in another spot around town.

The snazzy-looking restaurant occupies a prime location in the city's trendiest pedestrian thoroughfare: South Congress Avenue. The former Shaggy's Pub, the space has undergone a hipster-heaven transformation with stylish chairs, Jetson-tilted crockery, and enormous slanted windows that offer as many opportunities to see as there are to be seen. The Trudy's folks, the brains and talent behind this endeavor, took their time getting the place open, and they seem to have spent a good deal of that time studying their future customers. The menu has been in the window for some time, and the upscale Southwestern offerings have looked promising.

After taking in an early movie we recently dropped by to give the dinner scene a look. Our party of three was seated at a booth, and two out of three of us felt in need of high chairs; the table is situated high and the flatware is oversized. At 5 foot 9 inches I was all right, but the situation is challenging for those of more modest height. We observed a group seated at a center-room table with a member of the party who was built like a football player. He looked as if he was seated in a kindergartner's seat in the armless, Charles Eames-style chairs.

Despite the small crowd when we arrived, our server was painfully slow getting us our drink order. I got our party seated and walked three blocks to the car to retrieve eyeglasses and returned before drinks were requested. On the recommendation of our eager server, I ordered a hand-shaken margarita with fresh lime juice. I'll take their word for it that there was no sweet and sour in it, but it was a mighty sweet cocktail nonetheless.

Salad lovers all, we started with the Caesar Orleans With a Creole-Style Dressing ($8) and delicious-sounding Gorgonzola grit croutons. The salad was crisp and the dressing pleasant if not especially unique, but the "croutons" turned out to be a single, triangular, fried concoction that tasted decidedly like a Tater Tot. Part of the retro chic thing, perhaps? We also had a Baked Brie in Puff Pastry ($10). Our server excitedly described the fabulous presentation of the dish, and while it was perfectly acceptable with slices of Granny Smith apples, strawberries, and small pecans, it was nothing extraordinary. The cheese ran properly when cut, and it was beyond rich, as such a dish is bound to be.

For entrées, we tried the Beef Tenderloin ($21) and a vegetarian option, the Wild Mushroom Stroganoff ($15). The 6-ounce beef was undercooked from the requested medium rare, but when that was remedied, it proved a lovely dish. The adobo chile béarnaise was not in the timid vein of the Caesar dressing; it had an assertive burn that lent smokiness to the dish, too. The garlic potato enchiladas provided the starch element and tasted more of tamales than enchiladas, but still were a nice Southwestern touch to the dish. The mushroom stroganoff was equally uneven: The sauce was rich, deep, and delicious and practically tasted like fall itself; the mushroom concoction, however, leaned heavily on cremini, and I spotted a mere two morels in the mix. The shitakes were not stemmed, and their leathery, tough stalks made masticating them nearly impossible. The limited wine selection proved disappointing. The one cabernet offered by the glass ($7) was not available that night, and we were offered an alternative for $9 a glass. Surely we should have been given the cab price, instead.

The dining room made for wonderful people-watching, inside and out, and the place filled up rapidly with stylish, laughing people. Their merriment was evident in the noise level amplified by the limestone walls and concrete floors. Perhaps the leaning in required to hear your dining companions lends intimacy to dates.

Our next visit was a Saturday late-morning brunch, and the more modest crowd kept the noise level down considerably. We began with steaming cups of the Guatemalan coffee made popular at Trudy's ($2) and a large glass of fresh-squeezed orange juice ($4). A basket of warm, dainty corn muffins arrived accompanied by soft honey butter. It took no small amount of restraint to keep from emptying the basket pronto. Having already crossed into the realm of splurging, I blew the remainder of a reasonable daily caloric allowance on the Eggs Benedict Oscar ($12), an English muffin topped with lump crab and snow crab, asparagus, and hollandaise. My companion, a devoted fan of such things, chose the Migas ($8). While plenty rich, the eggs Benedict was rather bland tasting. I could barely discern the hollandaise amid the broken yolk. The seafood, too, came off as little more than pleasant filler underneath the eggs. The migas fared better. They weren't the gooey, delicious mess served at Trudy's. These were a more refined version, if such a thing is possible in migas. They came with some tasty refried black beans and an unremarkable potato pancake made with shredded spuds. Our server was attentive and kept the java coming, and there is no better place to observe the substantial Saturday crowd on the avenue. The more subdued atmosphere allows for leisurely reading if one is so inclined, or one more cup of coffee while you plan your itinerary for the day.

South Congress has plenty of dining options available from the top-tier Vespaio to the drive-in burgers of Fran's. Where does South Congress Cafe fit in that spectrum? Somewhere in the middle, probably just where it was aiming. Its sensibility, its decor, its whimsy, its retro cool ambience make it look and feel like it was made for SoCo. And from the looks of things, that position hits the mark with lots of people just perfectly.

More City, SoCo Cafe Fracas
After busting South Congress Cafe back in February 2005 for unpermitted construction of a decked rear patio and privacy fence that covered city sidewalk and right-of-way, city still at odds with eatery