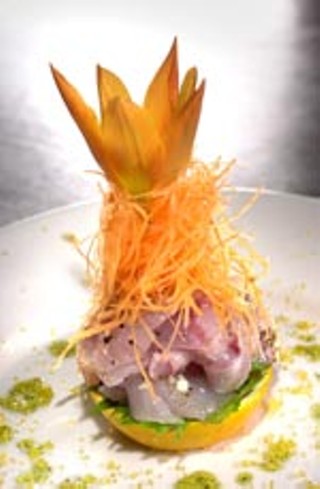 In recent years, sushi restaurants have been sprouting around Austin like mushrooms after the rain. While there are some high-quality sushi restaurants, it also seems that most Japanese and Korean -- and even some Chinese -- restaurants in town now feature a sushi bar. These establishments offer decent sushi for a decent price for those seeking a quick fix. However, with some notable exceptions, most of them have fairly uniform menus with the same standard items.

In May of this year, Uchi opened for business in the house formerly occupied by Si Bon. As an avid sushi lover I couldn't wait to try it out. To be honest, I expected it would be some swanky, expensive sushi bar for food-trend and fashion followers. Boy, was I wrong. Uchi offers one of the most exciting culinary experiences in this town, the product of a labor of love and a true passion for innovative and adventurous cuisine that is definitely out of the ordinary.

The first impression one gets at Uchi is that someone put great care and attention to detail in transforming the space from a French-style cottage into a modern, Japanese-influenced building with a homey atmosphere. Architect Michael Hsu and interior designer Joel Mozersky did a marvelous job of creating a setting that matches and enhances the dining experience. The outside patio, with its bamboo curtains, river-rock floor, and candle-lit concrete fountain really works as a comfortable place to sit and have a drink at dusk, regardless of the traffic on South Lamar. The interior is modern yet warm, and the friendly and attentive staff makes one feel welcome from the moment one steps through the door.

I consider sushi to be my "summer comfort food," so we stopped by on an early summer evening for a drink and a small bite, when the hot weather dictated that I eat something cool and refreshing. Upon entering the building we sat at the bar and were warmly greeted by a group of young, internationally diverse sushi chefs headed by young executive chef and owner Tyson Cole. We were received with warm towels and a gorgeous stoneware tray holding two shot glasses filled with sweetened green tea over crushed ice and a big, plump blueberry floating on top. The best way I can describe this is as a sort of amuse bouche for the soul. It was so unique and refreshing, I felt my spirits lift. After this, I knew great things were to come.

It is a joy to watch chef Cole at work. At 32, he is one of Austin's youngest chef/owners, and also one of a few American sushi masters. He garnered a great reputation among many of Austin's sushi lovers while working at Musashino, and after living and training in Japan, he came back to Austin ready to shine on his own. He readily converses with patrons and playfully jokes with his staff in both English and Japanese, while overseeing the work of the sushi chefs, the bartender, the line cooks, and the yakitori grill, keeping the rhythm of the restaurant with momentum and charm. He is dynamic and funny and a bundle of energy. All the sushi chefs are young and enthusiastic and willing to make conversation and offer suggestions according to your tastes.

The menu at Uchi is designed so that the portions are enough to share but small enough to try many of them. We sampled a few offerings from the cold and hot "tastings" menu; small plates designed to be eaten at any point of the meal rather than as appetizers. From the cold selections we chose the Crudo ($8), an artfully arranged composition of raw red snapper slices, grapeseed oil, yuzu (a Japanese citrus), garlic, and black pepper in an orange-juice vinaigrette. The combination of the delicate flavor of the fish with the crisp citrus flavors is incredible. From the hot selections we chose the Avo Bake ($7), half an avocado stuffed with tiger shrimp and crab in a spicy, creamy sauce. Although the crab was really krab with a "k," the dish was delicious nonetheless. I can't help but think how wonderful it would be with lump crabmeat instead.

The specials change daily, since chef Cole believes in using seasonal ingredients of the best quality, and it shows. On this visit, we tried the octopus yakitori special, or Tako Pops ($6). Three tiny octopuses marinated and grilled arrived at the table, each on a long bamboo skewer, like little red lollipops with tentacles. They were tender and delicious, with just a hint of smoke from the grill. But my favorite, and definitely one of the best dishes I've had all year, was the Tuna With Watermelon Sashimi ($10). This was an inspired combination of flavors like I've never had before: cubes of silky, top-quality tuna skewered atop cubes of bright red, summer-sweet watermelon, drizzled with salty Vietnamese fish sauce, and sprinkled with golden tobiko (flying fish roe) in a perfect juxtaposition of flavors and textures. The salty kick of the fish sauce and the popping sensation of the fish eggs combined with the watermelon and tuna were like fireworks for the mouth. Simply incredible.

The quality of the fish is what makes Uchi stand out above the rest. Chef Cole has his seasonal fish flown in daily from all over the world, through a Japanese purveyor in New York. Like he said while we were sitting at the bar, if you want quality you have to pay for quality. Sushi at Uchi is expensive, but it is worth every dollar, mainly because you're not going to get this quality of ingredients and preparation anywhere else in Austin, period. We sampled my favorites: tuna, salmon, and mackerel, all expertly prepared, beautifully arranged, and silky smooth in the mouth. Quite simply, the best nigiri sushi I've ever had.

The menu also features unique sushi rolls of Cole's own creation. And while I myself prefer nigiri sushi and sashimi over makimono (sushi rolls), there are plenty of interesting options for those who like their sushi rolled. The Mustang ($10) is a tasty combination of freshwater eel, yellowtail, avocado, and golden tobiko, and the Shag ($12) is the ultimate indulgence of avocado, sundried tomatoes, and salmon, tempura fried, and served with a yuzu citrus salsa. For something completely different, the Endo, which more closely resembles a spring roll than a sushi roll, consists of raw sea bass and tuna wrapped in delicate rice paper, served with a Japanese mint leaf and orange bell pepper salsa.

I went back to Uchi in the early fall to celebrate my birthday. I wanted to try items from all sections of the menu, including more items from the kitchen, since chef de cuisine Justin Sells also has a great reputation in Austin from his days as the executive sous chef at DemiEpicurious. I also wanted to see if anything had changed since my visit in the summer. Thankfully, nothing has. If any changes were made, they were all improvements.

Our server mentioned that the yakitori grill at Uchi is one of the few authentic charcoal yakitori grills in the country, reaching temperatures of nearly 1,000 degrees, searing the meats to juicy perfection. We ordered the Ginko Nuts ($3) since I'd never had them before, and they were a delicious surprise, similar to macadamia nuts. Other interesting yakitori items available were mushrooms, scallops, Muscovy duck, prawns, and Wagyu beef, which was also delicious. Wagyu is a Japanese breed of cattle, also know as Kobe beef, referring to the Kobe county in Japan as its denomination of origin. Until recently, to be called Kobe beef, the Wagyu cattle had to be bred and raised in Kobe. But these days, most "Kobe" beef is bred and raised in California, Australia, and even Central Texas.

From the daily specials we had the Sawagani ($6), a trio of tiny Japanese freshwater crabs, fried whole with sea salt. I had encountered these little fried crabs at a fusion sushi restaurant in New York City a few years ago, but had not seen them in Austin until now. They are deliciously crispy and most definitely an adventurous dish. One of my dining companions and I agreed that we could easily consume a whole bowl of the little guys like popcorn with a cold beer while watching football. We also sampled other fun items from the "tastings" menu. We liked the Green Tomato Tempura ($2.50), a Southern classic with a delightful Japanese twist. The Hot Rock ($14) is a "sear-it-yourself" treat of paper-thin slices of Wagyu beef served aside a very hot river rock to sear them on and a light citrus-salt sauce on the side for dipping. Wow. The Saba Shio ($5), a chunk of fresh mackerel grilled with sea salt, was perfectly cooked and tasty.

The kitchen specialties are what may be considered the entrées, but they work just as well for sharing, and, as the menu points out, they are "chopstick friendly." We sampled the exquisite Tamarind Lacquered Pork Chop ($15), with a wonderful smoky aroma from the grill, served with mashed root vegetables, freshly grated pear, and rice wine mustard -- an excellent combination of fall flavors. These dishes also change seasonally, to make use of the freshest ingredients available.

We absolutely couldn't pass up their dessert special of the day, a -- no kidding -- Twinkie Tempura ($5), served with a milk caramel dipping sauce, raspberry coulis, and candied macadamia nuts. And as weird as it may sound, it was actually pretty good, although I preferred the Valrhona Chocolate and Wasabi Fondant ($7), beautifully served inside of a five-spice-flavored tuile, with a raspberry-hibiscus coulis: an unexpected combination of flavors that works wonderfully. We especially loved the exotic taste of the five-spice tuile, another example of Uchi's "no boundaries" kitchen philosophy.

Uchi has a small wine list, but it is composed of selections that complement the food very well. There are also Japanese and other beers to choose from and a very impressive selection of cold and hot sakes. A good opportunity to sample some of these is the Sake Social Hour Monday through Saturday from 5 to 6:30pm, with $2 hot sake and food specials.

Executive Chef Tyson Cole and chef de cuisine Justin Sells have put together a menu full of intriguing options that merge Japanese tradition with ingredients from all over the world to create what Cole calls "playfully global cuisine." Uchi is neither your average sushi bar nor your average Japanese restaurant, and it truly defies categorization as either. These young chefs are breaking culinary ground right here in our own South Austin back yard. Their food is adventurous, challenging the diner to set aside preconceptions about cuisine and cooking styles, and to try something new and exciting. And after writing these words, there's only one thing I can do: I am out the door on my way to dinner at Uchi. 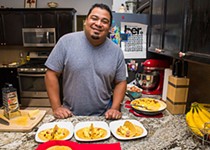