The Taste of Summer 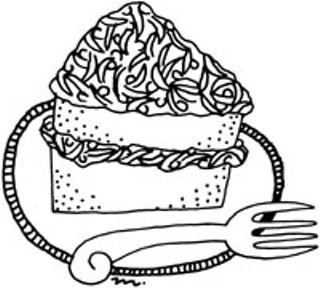 There's a neighborhood in Virginia that has taken on a misty, watercolored hue in memory. It was the neighborhood of my elementary school years, and it had lots of kids, leafy yards without fences, access to woods safe for walking or exploring, a brook with lots of guppies and similar Lilliputian fish. There was the neighbor who, in what would now be considered an act of environmental murder, would burn his lawn every year. The conflagration was a must-see event for kids, and the stench could be detected for miles. Then there was the neighbor who never opened her curtains. Never. From inside it could be noon; it could be midnight. No way to tell. There was the neighbor who toilet-trained her poodle. I only got to see that once because she was very particular about her housekeeping, and little kids were not conducive to clean homes. And once a year, on the Fourth of July, these families would convene for a neighborhood potluck picnic.

The affair was in a back yard. The exact epicenter of the affair would vary from year to year, but it made little difference, as this was a truly movable feast. All you had to do was go to your back yard and follow the movement of the crowd through various lots until you reached the designated yard of the year. Tables would have been hauled out and laden with summer stuff: fried chicken, hot dogs, hamburgers, potato salad, etc. Gallons of Kool-Aid and lemonade quenched childhood thirsts. And there was no parental limit on sweets on this particular evening.

In my mind, my parents were the glamour couple. My dad was a handsome Air Force officer; my mother could and did model clothes after the birth of her sixth child. Weekday dinners were fairly ordinary, suburban affairs, but for Sunday dinners we hauled out the fine china, got milk in crystal goblets, and dabbed our chins with ironed linens. Yeah, they knew from glamour. My mother's sophisticated reputation was sealed in my mind, and the minds of the rest of our small corner of northern Virginia when she brought a spectacular contribution to a Fourth of July picnic: a German chocolate cake!

This was the mid-Sixties, so the culinary impact of this confection cannot be overstated. Sure, we'd seen cakes before. Chocolate layer cakes with fluffy icing, sheet cakes that could feed a small army of kids. I'd even had a cake baked in a bowl that formed an antebellum skirt on a doll. But this! Why, the frosting deliberately and provocatively exposed the three layers of cake. And what kind of frosting was this anyway? Almost opaque and holding coconut and pecans, it was more of a caramel than frosting.

Conservative diners might cautiously approach an unfamiliar hors d'oeuvre or vegetable, but they become intrepid culinary explorers when it comes to new sweets. So, everyone oohed, ahhed, and lined up for a slice. While there were three layers to the beauty, the pans were the usual 9-inch size, so even if you sliced the layers thin, the cake disappeared long before everyone got a slice to call their own. And perhaps that just added to the mystique: It was exclusive. It was the Studio 54 of cakes; not everyone who wanted to be a part of it could. You had to be satisfied hearing about it, or begging a bite from someone's plate. It was, quite simply, a sensation. My mother's crown was burnished, and her level of sophistication was on par with Jackie Kennedy's.

As far as I know, no other domestic goddess on the block ever attempted to create this concoction herself. And really, after such a conspicuous debut at the Fourth of July, any other version would have been so derivative. It was solely my mother's achievement, and only she possessed the élan to carry off such a dessert. I can't even recall the last time I tasted a German chocolate cake. I don't even remember if it's any good. What I do remember is that on a particular summer night on Rollins Drive in the Sixties, it made cherries jubilee look like an apple brown Betty.