Feast of the Dragon 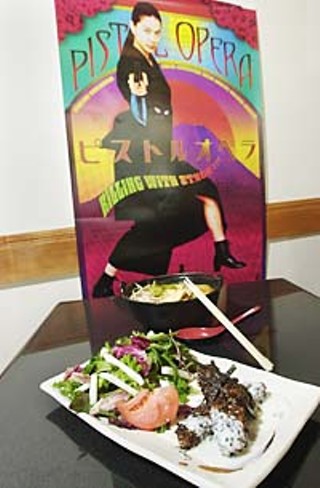 When Tim and Karrie League opened the first Alamo Drafthouse Cinema in 1996, I was a member of the original waitstaff. It was a difficult and demanding job, and it would be my last as a waitress. Since the concept was brand-new in Austin, and none of us knew exactly what to expect, we were literally figuring things out with each screening. But the Leagues were so energetic and they had such great ideas that we all just knew we were part of something special. Seven years, three locations (and a fourth in Houston), and many great special events later, it's obvious that we were right.

One of those great ideas was to have special nights for pairing movies with food, say, like showing a Sergio Leone spaghetti Western and serving all-you-can-eat spaghetti, or having cans of Pabst Blue Ribbon as a special during the screening of Blue Velvet. And, of course, the fabulous special screenings of "Eat, Drink, Watch Movies" that benefit the Capital Area Food Bank are now eagerly awaited by Austin's movie and food lovers.

But the only themed movie-and-food pairing that goes on at the Alamo on a regular basis is the spectacular Hong Kong Sundays. The first Sunday of every month, martial arts aficionados can enjoy the best of Hong Kong's kung fu movies, paired with a special menu featuring Asian dishes prepared by the Alamo kitchen. The movies range from the weird, campy, and funny to the serious and even scary, but they are always highly entertaining, action-packed martial-arts feasts. This is a very popular event at the Alamo, even for those who are not declared fans of this type of filmmaking. Last month's selection, Drunken Wutang, was hysterically funny, featuring a "watermelon monster" intent on attacking the men's most private parts, and subtitles so outrageous that it was all I could do to not spew my Vietnamese coffee while laughing.

The original menu was in large part designed by Karrie, who is a dedicated foodie. "What can I say? I like to eat. All Chinese people like to seriously eat. I think it's genetic," she says. "I've always been this way. It comes from [growing up in] a family that eats all the time and seeks out the best food as a mission in life." She credits her family's passion for good food for changing the tastes of her husband, Tim, and her two brothers-in-law: "They were, to varying degrees, food idiots. They ate macaroni and cheese out of the box and Chef Boyardee and thought it was good." For Hong Kong Sundays, Karrie used some of her mother's traditional Chinese recipes, giving them the movie-inspired names that the Alamo is known for, like Salad of Legend, Wheels on Meals Pot Stickers, and Jackie Chan Chicken Lettuce Wraps. The only nonmovie name on the menu was Momma Fong's Hot and Sour Soup, Karrie's mother's famous recipe, given to her by a Chinese celebrity chef in Karrie's hometown of Palo Alto, Calif.

However, it had been consistently difficult for the kitchen staff to figure out how much food to make on any given Sunday, since the menu was special and used only once a month. If they prepared too much and too few people came, there could be a huge waste of food. If they misjudged the popularity of the movie and didn't make enough food, chances were they would run out. This was a problem that needed solving soon.

One fateful afternoon, Karrie took Tim to lunch at Noodle-ism, just down the street from the downtown Drafthouse, where she often eats lunch during her workweek. After a couple of bites of food, Tim had an idea. "'We should have them do the food for Hong Kong Sundays,'" he told Karrie. The very next day, Karrie contacted Noodle-ism's chef owner Jeff Liu to see if he would be interested. To Karrie's relief and joy, he agreed, and they began working together to design a menu with items that would fit the Alamo format.

"This is so exciting," Karrie explains. "We are going to be able to have first-rate food and avoid the problem of having too little or too much. And we know it will be consistently good." The plan is to start with a basic menu, and then have rotating and seasonal items. "We are also planning to show more Korean and Japanese films," says Karrie, "so we are excited to be able to have special menu items from those cuisines for the screenings." Chef Liu, well known for his innovative approach to Asian cuisine at both Noodle-ism and Bistro 88, will adapt some of his favorite items from both of his restaurants so they can be eaten easily in the dark, while watching a movie. He will also create special items that will be served only at the Alamo's Hong Kong Sundays. After the great success of their first Hong Kong Sunday partnership on July 6, Karrie is excited about the next show, coming up on Aug. 3. "It went off really, really well. Everything went smoothly, and [the food] tasted great!"

I was able to attend a "special preview" of the new menu for Hong Kong Sundays. The menu will feature soup, a salad, a noodle dish, two vegetarian options, two entrées, and desserts. The tasty miso soup with soft tofu and scallions is simple, but flavorful and comforting. The peppercorn-crusted salmon salad is absolutely delicious. The salmon strips are coated with a mixture of coarse ground black peppercorns and finely chopped dried shiitake mushrooms, then pan-fried to perfection. The firm, crusty topping perfectly complements the moist salmon, which is then served with a yogurt-mint sauce and baby greens tossed in Chef Liu's signature honey-balsamic vinaigrette.

The noodle dish was my absolute favorite, a Malaysian hot and sour soup with wheat ramen-style noodles and chicken, flavored with lemongrass, hot chiles, and coconut milk. It is tangy, has just the right amount of spice, and packs a flavor punch worthy of the best kung fu screen antics. After one bite, I just could not stop eating it until it was gone. And with the noodles and chicken, it makes a satisfying meal in itself.

The vegetarian options are very good, as well. They will keep the popular lettuce wraps, but will use a tofu and red bell pepper stir-fry flavored with sweet soy sauce, instead of chicken. The crisp lettuce is a nice contrast to the warm stir-fry, and makes this a great item for the Alamo, easy to pick up and eat with the fingers without missing a blink of the action onscreen.

Chef Liu will also offer a tofu sandwich, which is what every nature burger should hope to be. The patty is made of soft silk tofu mixed with Japanese ginger and Thai basil, then coated with panko bread crumbs and fried. It is served in a hamburger bun with lettuce and tomato, with a side of mayonnaise. Now, I am not a big fan of tofu, or nature burgers, for that matter, but this one is in a class by itself. The flavor kick offered by the Japanese ginger, the anise-like finish of the Thai basil and the crunchy coating of panko bread crumbs make it one unique and tasty burger.

The meat entrée I tasted was a bowl of steamed rice topped with two finger-sized ribs in a sweetish Korean barbecue sauce, a spoonful of sesame-dressed lettuce and carrot slaw, and a thick slice of mildly pickled yellow daikon. The combination of textures and flavors was incredible. I can't wait to see what other entrées they will come up with.

Last but not least, there is dessert. The Drafthouse had been serving almond cookies for Hong Kong Sundays, but Chef Liu suggested that they try the Mochi ice cream, which is delivered to him weekly from the manufacturer in L.A. This was a completely different concept for me, and I was pleasantly surprised. The ice cream is formed into bonbon shapes, frozen solid and wrapped in a thin, rice dough coating. The best description that comes to mind is that they resemble pastel-colored ice cream dumplings. The sensation of biting through the rice coating into the frozen ice cream was really different, but pleasant. My favorite flavors were coffee and green tea, but they were all good. The coolest thing is that they can be picked up individually from the plate and eaten as if they were a piece of candy, so they're perfect for the Alamo format. This is fun food at its best.

To wash it all down, there are many beverage choices: hot Oolong or jasmine tea, iced Vietnamese coffee, Tsing Tao beer, and for the adventurous, the "rotating exotic beverage of the orient." This usually is, as the Leagues put it, "whatever catches our eye at the Asian supermarkets." So, be prepared for grass jelly, bird's nest, or white fungus drinks.

As if Hong Kong Sundays weren't already exciting enough, now we can expect surprises not only on film, but also on our plates. I guarantee that Chef Liu's outstanding cooking will be just as spectacular and tasty as the eye candy served onscreen by Asia's best kung fu masters. And I bet Karrie's family would agree.

A Man Called Hero screens at 7 and 9:45pm on Sunday, Aug. 3, as part of the Alamo Drafthouse Downtown's Hong Kong Sundays series. The menu will be catered by Noodle-ism. For more information, call 476-1320 or visit www.drafthouse.com.