At their Southern Dinette, family-style soul food took on a whole new meaning The building at 1010 E. 11th, shown here as it appeared in the Seventies, is more than 111 years old and is now one of the oldest commercial buildings on the Eastside. The Southern Dinette (far right) closed in 1988, and all but the west section of the structure (now Shoehorn Design) burned down three years later.
(HB11thE1010Pich 00616)

At night in the early Seventies, East 11th could be a dangerous place, but during the day we were always welcomed warmly by Jimmie and Georgia Owens at the Southern Dinette. It was right on the edge of the Eastside, just a few blocks east of the interstate. A carload of young white guys cruising that corridor in those days often invited semihostile, suspicious stares from the residents, and any cop in sight pegged you as someone shopping for either sex or drugs. Young whites didn't casually drive east of the interstate without a good reason, and our reason was fabulous Southern food ... serious soul food.

The building, at 1010 E. 11th, is more than 111 years old and is now one of the oldest commercial buildings on the Eastside. It was originally occupied from 1898 to 1922 by Arnold's Bakery, owned by a German immigrant who had first worked at the Lundberg Swedish Bakery on Congress. It was then passed on to relatives and became Reuter's Bakery. Jimmie Owens then bought the property in 1946. (Interestingly, Reuter's Bakery manager Carl Stengel owned the house where the East Side Cafe now resides.)

In 1947 it was converted from a bakery to a cafe, and soon after that it became the Southern Dinette. Also in the building were the Jolly Time Recreation Club and the Southern Barber Shop, and the Owenses lived above the Dinette. Through the late Forties and the Fifties, the Dinette had a reputation for serving the best soul food on the Eastside, while across the street was Shorty's Bar & Grill, which was part of the "Chitlin' Circuit," a nationwide network of nightclubs and honky-tonks where black entertainers performed. The first time I went to the Dinette was under the guidance of my University Co-op co-worker and pal Artly Snuff in 1971. He heard about it from either Mike or Larry, both black Co-op compadres who had been singing the Dinette's praises. It was a good recommendation: The first taste and we were hooked. Soon, we became regulars, as did a retinue of fellow Co-op workers and our gang from the neighborhood: the Corn Palace and Bean Palace residents and hangers-on of West Sixth. We were a core group of honky hippies hooked on the food of our country kin, prepared by the Owenses, and every meal brought back a flood of sweet ancestral memories.

Jimmie had a way with seasonings. You never needed to even think about adjusting the flavor with salt or pepper: It was always perfect. The flavors were rich, luscious, and seductive. One bite could instantly transport me back to my grandmother's kitchen in East Texas. It was the absolute best soul food that could be had in Austin. You knew that the taste would be consistently perfect, it would be served with affection, the portions would be huge, and the price would be ridiculously fair.

Jimmie was tall, serene, and smooth, while Mrs. O was a bit more feisty and businesslike. She was a petite woman with a light complexion who always wore her wig hat and didn't really care that it wasn't on straight. Sometimes the part might be way off to the side, or it would be perched on the top of her head kind of cockeyed. She always had on an apron exactly like the kind my grandmother used to wear: slightly frayed cotton fabric with piped edges, covered with an old-style Southern floral design.

During our Dinette days, the abandoned Shorty's was one of the most popular places for prostitutes to ply their trade, because it faced north (out of the sun) and had an awning for cover when it rained. The working girls would come across the street to eat and get drinks to go. Mrs. O and her clutch of church ladies from Ebeneezer Baptist would really get their dander up when the girls would come into the restaurant. Words and insults would fly, and the prostitutes were shortly run back across the street. For a naive white kid this was quite a revealing little slice of life to witness. 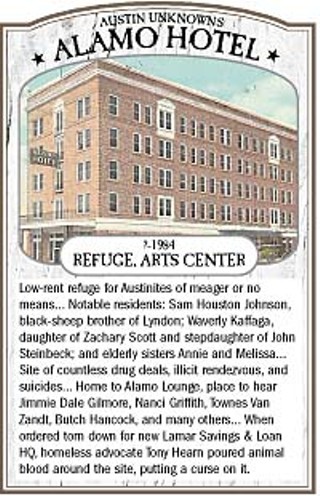 Every Sunday, Mrs. O would hold court between breakfast and lunch with her church lady pals and gossip about everybody's business on the Eastside. The church ladies always wore their Sunday finest, and without fail had their fancy plumed Sabbath hats on. Jimmie would tell us dirty jokes whenever the missus wasn't within earshot. Much like a grandfather figure to us, he was always as kind as could be, and really laid-back. He sure loved his gambling trips to Vegas. We always called Jimmie sir and called Georgia ma'am. We had the utmost respect for both of them, and they made us feel like one of the family.

We always went on Sunday morning, no matter how bad the hangover was. It was our version of a religious experience. The menu was a choice between either pan-fried chicken or roast beef and dressing, and Sunday was the only day that they made the incredible peach cobbler. (You had to get there early, both to avoid the crush of the crowd in the small dining room and to make sure Mrs. O had plenty of cobbler left.)

The only person that I ever knew Jimmie to reveal the peach-cobbler recipe to was Raymond Tatum's little sister Debo, who still makes it today. He wouldn't give her the recipe outright but told her to keep making cobblers, and then bring him a taste, and he'd tell her what it needed. After two months of attempts, he pronounced it as "pretty close" (which meant it was right-on), and Debo glowed with pride for weeks.

Friday was fried cod or short ribs. Thursday was chicken and dumplings or meat loaf, and other days were classic Southern entrées like smothered pork chops, chicken-fried steak, roast chicken, liver and onions, ham hocks, etc. It was always beef or pork paired with chicken or fish. The side vegetables were fairly constant: navy beans with slab bacon, black-eyed peas with snaps, collard or turnip greens, stewed cabbage, stewed okra and tomatoes or fried okra, macaroni and cheese, mashed potatoes and gravy, corn, candied sweet potatoes, etc. The cornbread was lighter than air and a touch on the sweet side. My favorite choice was the cod with navy beans and greens. The plate was large, and it would set you back $2.75 or so. We would have paid twice that, and more.

In 1976, Jimmie had a stroke and died soon after from a fatal blood clot. Mrs. Owens was able to keep things going for a while, but she was tiny and in frail health and just couldn't keep up. The Dinette went through a succession of operators (Betty Sanders and her sister Irene Mason, Mrs. O's granddaughter Georgia and her husband Joseph Wallace) until it closed for good in 1988. A fire destroyed the original two-story section in 1990, leaving only the west section intact (now Shoehorn Design).

Of the people who ever ate there, it would be difficult to find a single one that doesn't lament its loss, even today. It was the perfect place for superb soul food, served by the sweetest and most caring people you could ever meet. When you went into the Southern Dinette, it didn't matter where you came from or what color you were, you just had to have a big appetite and a love of great food. Of all we have lost in Austin, the Southern Dinette -- and especially its owners, Jimmie and Georgia Owens -- are among its most mourned.

The author would like to thank the following for their input and memories: Artly Snuff and Teresa Fox, Raymond and Debo Tatum, David West and the crew at Shoehorn Design, the Carver Museum, Betty Sanders, Irene Mason, Arthur Sauls, and the Austin History Center.