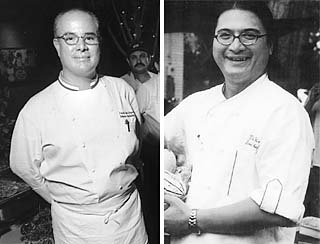 Roberto Santibañez and Tien Ho: two successful young chefs now working in New York who recently lived and cooked in Austin. Both were born outside of the U.S., and both were heavily influenced by French cuisine early in their lives. One went to cooking school; the other learned on the job. One's family encouraged his career choice; the other's was skeptical. Both find the change from Austin significant, and both are doing extremely well in the New York restaurant world. On both counts, Austin's loss is New York's gain.

As former executive chef at Fonda San Miguel, Roberto Santibañez was known in Austin for his inventive interpretations of Fonda's traditional interior Mexican food. Now he is the culinary director for New York's two Rosa Mexicano restaurants -- the popular Eastside original open since 1984 and its sleekly fashionable new sibling at Lincoln Center where I met him for a memorable dinner.

When I admitted I didn't know what a restaurant's culinary director did, Santibañez laughed and said, "I suppose I'm the company's official palate. While the restaurants' executive chefs can be as creative as they want, I make sure that, ultimately, we serve Mexican-tasting food."

If the dishes I tried (and there were many) are any indication, this combined approach of tradition and invention is working extremely well. I'm still dreaming of a layered dessert of guava, coconut, and mango sorbets, garnished with pineapple confit and hibiscus-and-rose-petal syrup. It was like tasting all of Mexico on a single harmonious plate. In New York!

Santibañez grew up in Coyoacan (the same Mexico City suburb where Frida Kahlo lived). His extended family routinely ate midday meals together throughout the week, alternating among family members' homes. "Food and hospitality was very important to us," he remembers. "We kids were encouraged to bring our friends home for lunch.

"My biggest food influence was my grandmother. She was a wonderful cook and gave informal cooking classes at home to eight or 10 friends. She traveled in Europe a lot, collecting food experiences and recipes. Then she'd come home and teach them to her friends. And to me. By the time I was 10, I was very comfortable making French sauces.

"I never had a single doubt that I wanted to be a chef, and my family was very supportive. My parents were working in Paris, so I moved there for two years to study at Cordon Bleu." After graduating, Santibañez became chef for a large private estate in rural England, where he cooked for quantities of guests, including British royalty. "My food then was very French, but I threw in a little Mexican, because I missed it."

After a year, he returned to Mexico City where he became chef for the foreign-affairs ministry, preparing formal dinners for visiting dignitaries. In the early Nineties he was a chef at three trendy restaurants in the Zona Rosa and downtown. "This period represented a quantum leap for me; I was learning about regional cooking and chiles and Mexico City markets, and putting it all together with my French training. I became friends with Diana Kennedy and Josefina Howard [the owner of Rosa Mexicano in New York] and Tom Gilliland [owner of Austin's Fonda San Miguel]."

Although Santibañez considered going to New York or opening a Mexican restaurant in Sydney, Australia, fate decreed that Fonda San Miguel in Austin would be his next culinary home. He remained executive chef there for four years, refining his signature haute Mexican cuisine with its traditional roots, contrasting textures and flavors, subtle sauces, and classical techniques. "Fonda and Tom were wonderful; it was a fantastic place to cook," he says. "Fonda is the most beautiful Mexican restaurant in this country."

After leaving Austin, Santibañez returned to Mexico to teach cooking classes in Oaxaca and work as an artistic director for Nestle. But in early 2002, he couldn't resist the invitation to join Rosa Mexicano, where he's wasted no time in introducing New Yorkers to the unique Mexican cooking style that Austinites had come to know and love.

"As far as I'm concerned, anything goes as long as you produce good food," he says. "We do need to respect some things, though. For example, I insist on the traditional processing of chiles; otherwise you do not get the necessary layers of flavor.

"I try to keep my flavors traditional, but you can reinvent traditions, which are never stable, anyway. It isn't that I want to cook Mexican food with ginger or wasabi, but I do want to keep evolving. We Mexicans Mexicanize everything -- we take it, analyze it, adapt it, and make it our own."

I met Tien Ho last August, just as he was leaving his position at the Driskill Grill and Bar to follow his culinary star to New York City. I heard he had been hired at Cafe Boulud, one of French restaurateur Daniel Boulud's hot New York restaurants. We met up after he'd finished a long Saturday shift, and he told me the story of his adventures in the kitchen.

Born in Saigon at the end of the Vietnam War, Ho lived there until he was 9. "I remember such an incredible French influence in the food in Saigon," he says. "When I was little, if I wasn't eating pho, I was eating French bread with pté."

Ho's family emigrated in 1982 to join his father in Houston, who had left Vietnam when Ho was 13 months old. He remembers, "The first night in Sugarland [a suburb of Houston], my father took me to a Safeway. My eyes hurt from the light -- I was used to having electricity only one day a week, and I'd never seen lights on at night. I just couldn't believe the aisles of food. My dad bought us a pizza, and I hated it. There was so much food in America, but I didn't like it."

"Growing up, my dream was to be a professor. I have degrees in history and philosophy, with five minors. There's a long tradition of educators on both sides of my family; my parents had been teachers; one grandfather was the dean of a school, and the other was a French teacher."

However, Ho became disillusioned with academia and considered a cooking career. "A friend was applying to culinary school at the Culinary Institute of America -- I checked it out and found I needed six months of kitchen experience first. So I looked for a restaurant job."

He landed in the kitchen of Jean-Louis DeHoux's Belgian Restaurant. "Everyone made fun of me because I didn't know anything," Ho wryly recalls. "I was so frustrated, and I made up my mind to be really good." Fortuitously, chef Christian Echterbille, longtime instructor at Brussels' the CERIA culinary academy, took over the kitchen. "He knew what I needed to know, and he knew how to teach me. I worked hard, I read books, and within two years, I'd progressed to sous chef.

"My parents weren't very happy about my culinary career; they'd wanted me to be a doctor or a pharmacist. But the hours I worked got my dad's respect. When I was 24, my life sucked -- I was working crazy hours, I had no social life, and my family was mad at me. But I wanted to be a chef."

"But I always wanted to go to New York. I had huge fantasies about what I'd do there, but when I arrived, I had nothing set up except a temporary sublet in Brooklyn and a list of places where I wanted to work. I answered an ad for Cafe Boulud, and after doing a stage there, chef Andrew Carmellini hired me as saucier.

"When I started, it was so tough; it took three months before I wasn't humiliated every day. I was used to hard work, but this was a different level and different style than in any kitchen I'd been. There are seven or eight [people] in the kitchen for each service, and every single cook is totally dedicated. I'm the only one who hasn't been to culinary school. But no regrets; I work, I cook, I go home and read food books. I must have read Escoffier a hundred times.

"It's not easy to make friends in New York; I haven't met a single person outside of work. I can't stress enough how hard it is to live here, but there's something magical and amazing about it. Every day I discover something new about this city. Nowhere have I seen the public so passionate about food -- they know good food, and if you do a good job, you get a loyal following.

"I do miss Austin. I miss my old home. I miss the open space, nature, and most of all, the Texas hospitality.