The Comforts of Home Cooking 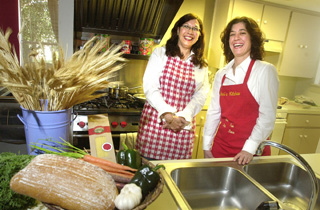 Cooking and dining out certainly became the new theatrical entertainment for the turn of the 21st century, but since the attacks of September 11, 2001, we've also noticed a trend toward enjoying food as one of the comforts of staying closer to home. While Austin currently boasts three professional culinary programs, we've also recently discovered two avocational cooking schools that are offering instruction where most cooking is still done: right at home. The owners of Gina's Kitchen and Batter Up Kids provide hands-on cooking instruction in casual, partylike settings -- in their homes -- and Austinites are eating it right up.

In the mid-1970s, a transplanted New Yorker named Martha Rose Shulman resided in a cozy cottage nestled in a deep, tree-shaded back yard in Old West Austin. A vegetarian and passionate cook, Shulman entertained friends regularly through the years with something she called "Supper Club Chez Martha," charging $10-20 per person for a dinner that included a cooking demonstration and pages of recipes. The Supper Club was very popular and led to catering jobs, more formal cooking classes at Ann Clark's cooking school at Bon Appetit Cookware, and, eventually, a regular column about vegetarian cooking in the Austin American-Statesman. Shulman eventually left Austin for Paris, where her Supper Club became the hottest culinary salon in the French capital, featuring vegetarian versions of Tex-Mex dishes from Austin.

Martha Rose Shulman is the author of numerous cookbooks and now resides with her family in California. Her Supper Club is remembered fondly by many Austin friends, and it appears the good cooking karma she created in that secluded West Austin backyard compound lives on today.

Fast forward to 1999, when newlyweds Ken and Gina Burchenal purchase a large West Austin property that includes a main house dating back to 1910, a huge oak-shaded back yard with two garage apartments and two cottages, one of which is Shulman's former home. Passionate cooks themselves, the Burchenals love to entertain; before long, they remodel the kitchen in the main house, and Gina embarks on a career of catering dinner parties and small events in addition to managing their rental units. In 2002, Gina came up with an idea to incorporate one of the rental units into her cooking business. She outlined her plan to longtime UT Informal Classes cooking instructor Sheila Marie Fleming over produce in the neighborhood Fresh Plus grocery store one day and recruited Fleming to become part of her new cooking school. Fleming brought years of catering and teaching experience to the project, and the two women collaborated on turning the apartment living room and kitchen into a demonstration kitchen with commercial stoves, refrigerators, and stainless steel sinks with a comfortable classroom area where guests could watch and dine.

Gina's Kitchen began offering classes in the fall of 2002. Burchenal and Fleming teach individually and together. "We didn't know each other all that well in the beginning," recalls Fleming, "but we've turned out to make a pretty good teaching team. One of us will demonstrate a technique and the other will tell a joke; it really balances out well." They've also invited local culinary notables such as Jeffrey's Alma Alcocer-Thomas and Alex Ralston of Reed's Jazz & Supper Club to present classes. Course offerings run the gamut of everything from party appetizers to composting 101, Austrian-influenced Northern Italian specialties to a mother-daughter Christmas cookie-decorating class. As a mother of three hungry teenagers, Burchenal plans to add classes on healthy snacks to her spring curriculum.

Guests at Gina's Kitchen stroll down the long, shady driveway, led by twinkling lights to the red kitchen door. The windows are festooned with Gina's apron collection, and food art prints grace the walls. Glasses of wine are offered, and folks settle in red chairs at two long tables for the demonstration. Hands-on participation is definitely encouraged. According to Burchenal, class makeup varies. "Sometimes it's all singles, sometimes one large group will book a class, or it can be couples out for an evening on the town." Regardless of who is in the class, Gina strives to make participants feel as though they're guests in her home, lucky enough to be attending a party where they'll also learn how to cook all the dishes.

After a hectic holiday season of catering and teaching, Burchenal and Fleming took off the month of January to regroup and plan their spring class schedule. For now, they promote Gina's Kitchen with fliers, notices to the local media, mail-outs, and e-mail to their client list, but a Web site is in the planning stages. The owners of the Cellar have agreed to include their cooking-class schedule in a spring newsletter, as well. And in April, Gina Burchenal hopes to re-create the Supper Club, making it a monthly occurrence. Serendipity and good cooking karma put her in just the right spot.

Kids Line Up at Home Plate

Barbara Beery credits her stay-at-home mother with her lifelong love of cooking. "Like most moms of [the Fifties], she was home every day. She created a safe and supportive atmosphere, letting me try things in the kitchen and have fun doing it," Beery recalls. Even though the Austin native followed the path of many women of her generation -- getting a degree in elementary education, teaching school, and starting a family -- Beery's found herself back in a home kitchen, creating that same supportive learning environment for a new generation of kids who want to cook. In addition to mom-style loving support, Beery also brings to the table a good teacher's knack for interactive curriculum development, great product ideas, and entrepreneurial zeal. Her Batter Up Kids Cooking School offers a complete package.

Beery began offering kids' cooking classes in her home in 1991 while she was raising three kids and teaching preschool. The classes soon led to cooking birthday parties where the birthday honoree and 10 to 20 guests enjoy an hour and a half of cooking time preparing and eating a sweet and a savory dish topped off with punch and a custom-made birthday cake. After that, it's party favors all around, and everybody goes home happy. (At $30 per kid, the birthday parties aren't cheap, but they're comparable to amusement-park visits, with much better food and much less wear and tear on the parents!) These days, Barbara offers a series of classes every semester, often built around holiday themes such as Mardi Gras, Easter, or Halloween as well as summer cooking camps. Her newest innovation is the Batter Up Kids Cooking Club, where kids who've taken her classes join a club and receive a monthly recipe and a utensil necessary to complete it.

Kids ranging in age from 5 to 9 are dropped off at Beery's Northwest Hills home and gather around the table in her big country kitchen. They get an apron, a chef's hat, and coloring recipe cards. Hands-on participation is a must, Beery explains. "I've taught in situations where the students just sat and watched, maybe getting to put the finishing touches on cookies or something, and that's not the experience I wanted them to have in my kitchen." Batter Up kids learn to read recipes, assemble necessary ingredients, use kitchen tools, and measure and mix to complete each project. Along the way, reading, math, science, and perhaps even a little history and social studies are integrated into the learning experience of each dish without the students even realizing it. Then there's the instant gratification of eating what they've worked so hard to prepare -- that makes it all worthwhile.

Once Batter Up Kids and the cooking birthday party business were firmly established, Barbara turned her entrepreneurial skills to product development and marketing. The coloring recipe cards are a sure winner, and Gibbs/Smith will publish Create a Cookbook, an interactive cookbook especially designed for kids 5-9, in early 2004. The recipes are easy to assemble, kid-tested, and fun to prepare and eat. There's a section featuring holiday recipes and another with "Incredible, but Not Edible Crafts," plus a Cooking School section with tips on everything from utensils, sanitation, safety, and etiquette to a glossary of cooking terms, measurements, and equivalents.

Beery's Batter Up Kids Cooking Kits are the natural companion to the recipe cards and cookbook. The whimsical but very useful Kid's Prep Kit includes a vegetable peeler, an egg "Whiskie," a melon-ball maker, a plastic chef with a pastry brush in his hat, mushroom, and fingernail brushes. The Baking Kit contains cookie cutters, small individual tart pans, and miniature muffin tins. Beery is currently test-marketing the prototypes of these kits in Austin stores (Breed & Co., Northwest Hills Pharmacy, Chef's Toolbox, Central Market, Over the Rainbow, and Cornerstone Hardware) and has pitched them to some well-known national cookware catalogs for next Christmas.

The only avenue that's so far proved less than successful is Beery's approach to the TV Food Network about a Batter Up Kids show. Even though the cable cooking network is known to always be on the lookout for new programming ideas, "They just don't seem to be all that interested in kids," Beery laments. She's determined to keep pitching, however, and hopes that eventually offering a program with a product line and a companion cookbook already in place will make the project more attractive to TVFN. Based on Beery's mix of curriculum and product development skills matched with her dynamic drive, I expect to see her teaching on television in the not-too-distant future. 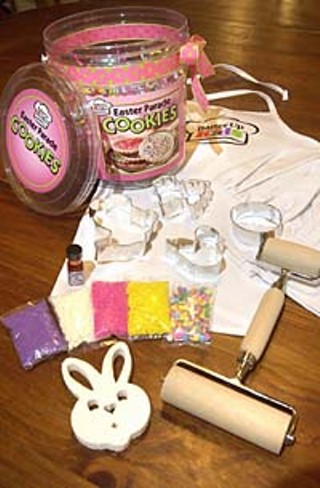 Sunday, March 2: Brunch for Your Lover with Emily Fleming-Nash, 1pm

Saturday, April 5: Easter Egg Decorating (ages 6 and up) with Gina and Sheila, 2-4pm