Food on the Fly 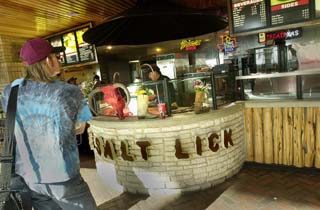 Airplane food has been a national joke for so long that it's beyond cliché. And yet, the diminishment of in-flight food service, resulting from airlines' economic woes, has proved a mixed blessing. While no one particularly wanted to eat those sub-TV-dinners that were once offered, the current scenario of traveling all day on nothing but soda and peanuts isn't a happy alternative, either. The savviest of travelers have learned to bring their own sustenance and enjoy mile-high picnics of whatever food they desire. That strategy, however, requires planning and forethought, elements that are often in short supply when scrambling to get out of town.

So, this is where airport food enters the picture. As a very frequent flyer, I've spent a lot of time cooling my heels in airports while becoming something of an airport-food connoisseur (not totally an oxymoron). I probably don't need to tell you that most of the food available to travelers in most airports is nothing to get excited about. While certainly more palatable than airplane food, just as malls across America all contain the same stores that sell the same merchandise, what you find to eat in airports is usually provided by faceless franchises selling the same oversalted slices of pizza, dry bagels, and premade, stone-cold sandwiches. Not very healthy, not very good, and certainly not reflecting the food culture of the airport's location.

However, there are some notable exceptions. In a few airports around the country, you can indeed find well-prepared and tasty regional favorites that not only are a pleasure to eat, but remind you that where you are is different from every other place. My own favorites are the Cuban sandwiches made to order in the Miami airport, Corky's succulent pulled-pork barbecue in the Memphis airport, and the homemade pies and spicily crisp fried-fish sandwiches from Your Black Muslim Bakery in the Oakland airport. O'Hare offers classic Chicago-style Vienna beef hot dogs with the requisite trimmings, as well as traditional deep-dish pizza from famous Connie's on the South Side.

I have to say, though, that there isn't an airport I've landed in yet that can hold a candle to the food possibilities of our own Austin-Bergstrom. Just as I've come to appreciate many of this airport's unique elements (live local music and native-plant landscaping come to mind), I've learned that the overall quality and choice of food at ABIA is not only tastier than that of other airports, but it represents something of a cross section of real Austin food.

This is not to say that everything to eat there is totally wonderful (it isn't), and not all the vendors are homegrown Austin. All things considered, however, you can eat heartily and well before or after taking flight, and you can take some good Austin-style food with you to enjoy en route. It's just a shame that Austin-Bergstrom is an origin-and-destination airport instead of a busy hub, where more hungry travelers could take advantage of the food. Just one more reason to be glad that you live in Austin.

Across from Gate 12 lies an outpost of the venerable Tex-Mex institution Matt's El Rancho. They serve traditional Mexican breakfast items, including pudgy and satisfying breakfast tacos (two for $6.20), accompanied by a flavorful salsa. After breakfast time, go for the Matt's favorites, including soft and crispy tacos, quesadillas, fajitas, enchiladas, and nachos, accompanied by the usual sides (everything priced under $9).

In addition to the regularly rotating selection of imaginative ice-cream flavors and toppings for which Amy's is known, the airport location offers the ultimate travel gift for homesick Austinites -- Amy's ice creams packed up to fly. They keep several of the vanillas, chocolates, and coffee flavors hard-frozen and ready to go all the time, but for other flavors to be made travel ready, you need to place orders at least 24 hours in advance (530-2918). The minimum travel order is 2 pints for $25; you can also get 2 quarts for $30, 3 quarts for $35, and 6 pints for $40. The ice cream is packed for carryons and will stay frozen for at least eight hours.

Harlon Brooks serves barbecue and breakfast in two locations at ABIA; one is a breakfast-and-barbecue joint, and the other is a full-service bar with barbecue and TV. For breakfast (until 10am), you can get various combinations of eggs, grits, bacon, sausage, and fluffy biscuits that your grandmother would approve of. (The breakfast plate with everything is $5.95; everything else is less.) The rest of the day, the solid barbecue offerings include brisket, beef links, turkey, chicken, and ribs, served in sandwiches, on plates with two vegetable sides, and by the pound ($9.95). An airport APD officer told me (unsolicited) that he ate at Harlon's regularly and opined that it was the best food in the airport; he was particularly partial to the chopped-beef sandwich and beef-stuffed baked potato.

NOTE: At press time, Brooks has petitioned the City Council to change the bar location (at a too-quiet far end of the concourse) to a Popeye's Chicken & Biscuits franchise, in an effort to increase business. The barbecue-and-breakfast location will remain the same.

The meat here is delivered daily from the Driftwood mother ship, and includes barbecue brisket and chicken, smoked sausage, and smoked turkey ($8-10 for plates and $7-8 for sandwiches), along with the standard sides of coleslaw, ranch beans, and potato salad. When I ordered a smoked-turkey sandwich to go for the plane, they kindly offered to put the sauce in a closed container on the side. You can also get a mean breakfast here: The menu includes breakfast tacos with fries, a ham-and-scrambled-egg sandwich on toast or a croissant(!), a spicy sausage wrapped in a tortilla, and biscuits and gravy with or without brisket.

This location also serves the same Salt Lick food along with a full-bar menu and TV.

The airport Schlotzsky's Deli serves the same menu as the other homegrown locations -- sandwiches, pizzas, salads, and soups. A Schlotzsky's Original wrapped up to go is my favorite take-aboard meal.

Open early in the morning, this location doesn't adhere to the standard Schlotzsky's menu, but instead serves specialty coffee drinks along with muffins, bagels, scones, croissants, and cookies. While no hot sandwiches are available, they have a selection of unremarkable cold sandwiches premade and wrapped to go -- turkey, ham, roast beef, and cheese.

The newest addition to the airport food scene, Lefty's is a self-conscious rendition of Austin's Sixth Street, complete with faux streetlights, awnings, and pressed-tin ceilings. They serve grilled sandwiches and Angus burgers on buns made fresh daily, tuna steaks, "extreme" fries, and a children's menu. They also have a full bar and some attractive desserts, including cheesecake, chocolate cake, and tres leches.

Locally owned Armadillo Cafe opens early and offers a morning Mexican menu. You can get smallish breakfast tacos of migas, chorizo, sausage, bacon, or potato for $2.40 each, along with some very nice home-style cinnamon rolls. Later in the day, burritos, tacos, nachos, taco salads, and quesadillas are available, along with a variety of hamburgers, hot sandwiches, and bar-style appetizers like hot wings and fried mozzarella. Beer is available. Nothing on the menu is more than $5.95.

This franchise serves unexciting but solid fast Chinese food and perhaps the highest percentage of vegetables anywhere in the airport (mixed stir-fried vegetables for $3.95). In addition to the usual Cantonese soups, egg rolls, and stir-fries with rice or lo mein, they also offer a buffet where you can create your own combination for $4.55 per pound.

If soft pretzels are your thing, Auntie Anne's has got you covered. Started in Lancaster, Pa., by its namesake, a former Amish-Mennonite businesswoman, this franchise rolls and bakes the big pretzels onsite, including sweet flavors such as almond and cinnamon-sugar, and savory ones like garlic, sour cream-and-onion, parmesan, and sesame ($1.99 each). And if one isn't enough, you can buy a make-your-own pretzel kit for $14.99.