Vespaio has always been good -- now, it's better 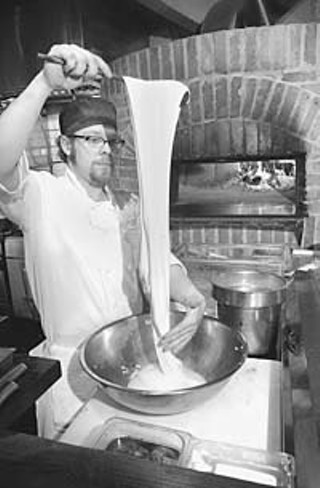 One of the most fascinating aspects of a restaurant critic's job is the opportunity to observe chefs and their restaurant ventures as they change and grow over time. Brooklyn-born Alan Lazarus took the on-the-job training route to a chef's career and has been working in Austin kitchens for nearly 30 years. Blessed with the gift of always attracting a crowd to the table, Lazarus has served everything from burgers and steaks at Mike & Charlie's and a Caribbean-inspired menu at the breezy Tortugas in the Seventies to the rich and lusty Italian-influenced Continental cuisine of Basil's in the Eighties to the more modern versions of Italian fare at Vespaio most recently. Lazarus and partner Claude Beneyoun opened Vespaio in the emerging SoCo neighborhood in October 1998 and immediately had a hit on their hands. The popular eatery has received rave reviews from diners and critics alike, maintaining a steady clientele even in the uncertain economic times of the past two years.

So why invest space in the second review of a successful restaurant that is widely acknowledged to be of good quality? Because good restaurants are living things, capable of evolution, and when an already successful restaurant takes pains to evolve into a better one, it's a worthwhile story. In short, Vespaio has always been good, and recently, it's so much better. Several factors seem to be at play in the restaurant's culinary evolution. In the fall of 2002, Vespaio's owners took an extended trip through Italy to become better acquainted with producers of Italian wines. In addition to winetastings, their trip included many homemade, family-style meals hosted at the various wineries. "We'd spend the day in the vineyards or the tasting rooms and then sit down to these incredible feasts, usually cooked right there by someone like the winemaker's mama, with things they grew on the estate and produced in-house like olive oil, olives, cheeses, sausages," recalls Lazarus with gusto. "The meals were amazing."

The freshness and earthy simplicity of those regional Italian meals had a profound effect on chef Lazarus, and the changes they've evoked are apparent in the more recent Vespaio menus. Yet another agent of change is Vespaio's new chef de cuisine, Ryan Samson. Samson arrived in Austin in the spring of 2002 after making his mark as sous chef to Michael Chiarello in the famed Tra Vigne restaurant in California's Napa Valley. Chiarello and Tra Vigne are known for signature Italian dishes made with the best local Napa foodstuffs: flavored olive oils, artisanal cheeses, Pacific seafood, seasonal local produce, and house-cured meats and olives. Samson learned his lessons well at Tra Vigne and brought experience and a fresh perspective to the Vespaio kitchen a few short months before Lazarus had his own epiphany in Italy. Thus the stage was set for the Vespaio kitchen to reach a whole new level of culinary accomplishment, beginning in the fall of 2002.

By that time, I'd had a couple of conversations with Lazarus about the ramifications of his great visit to Italy and heard his spiel about the impressive new young gun he'd hired from California, well before I ever tasted the fruits of change. In early November, the Vespaio kitchen prepared the meal served during The Godfather at one of the Eat, Drink, Watch Movies screenings. The young kitchen staff volunteered to produce the meal on their night off. Watching them work like a well-oiled machine, Samson at the helm on the line and Lazarus expediting and running the show, was as compelling to me as anything happening in the theatre. I was especially impressed with the team's response to Samson's quiet, confident leadership, to say nothing of the meticulous preparation of each of the dishes: freshly made mozzarella paired with hand-peeled roasted red peppers and house-cured olives, house-made pork sausage and plump meatballs in a hearty sugo, roasted wild mushrooms in the duck cacciatore, and delicate crisp cannolis. I was sufficiently impressed to make plans to eat at Vespaio soon after, once before Christmas and again early this month.

What I can tell you is that if you loved the restaurant before, many of the things you loved are still there, perhaps fine-tuned just a little, and presented alongside some wonderful new dishes. The portions are still generous, the flavors still big and satisfying, but there's a refinement and polish to every offering that wasn't there before. If you haven't tried Vespaio, there's never been a better time to do so. The new winter menu (with specials del giorno) offers hearty, comforting dishes to ward off whatever chill might be in the air. The antipasto case is as inviting as ever, packed with glistening roses of house-cured salmon garnished with crème fraîche, caviar, capers and onions, simple roasted eggplant with tomato-basil pesto, briny house-cured olives, and decadent orbs of mozzarella that are made fresh daily.

In the previous four years of dining at Vespaio, I'd honestly never noticed a soup offering other than cioppino, but now the daily soups ($8-9) are stellar and not to be overlooked. The voluptuous, saffron-scented lobster bisque made my Top 10 list of savory bites for 2002, and a silken leek, potato, and tomato concoction complemented by an earthy shaving of black truffles and salty duck rillette on a crisp crostini was unforgettable in its own right. Vegetarian gourmands who crave an elegant fine dining experience so often lacking in Austin should be suitably impressed with the Funghi con Polenta e Marmellata di Cipolle ($9), an oven-roasted portobello mushroom presented atop an amazing polenta cake, golden brown and crisp on the outside, yellow and creamy within, drizzled with aged balsamic syrup and melted gorgonzola dolce. It's a perfectly balanced, very sophisticated appetizer and would make a worthy dinner paired with the house spinach or Caesar salad, vegetarian or not.

Many of Vespaio's best dishes spend some time in the oak-fired brick oven: meats, seafood, and pizzas all emerge with distinctive flavors. If you're a fan of brick-oven pizzas with a whisper-thin crackling crust, give the hearty combo of homemade Tuscan pork sausage, roasted peppers, caramelized potatoes, ricotta, and fresh mozzarella a try ($15). Winter is a great time for slow-roasted meats, and a recent special of pork shoulder ($21), with wild mushrooms in natural jus paired with sweet potato mashers and braised mustard greens, was soulful, Southern comfort food by way of the Italian countryside. Another marvelous American meat-and-potatoes special via the Appian Way was a grilled Black Angus rib eye ($29) under a crust of melted gorgonzola dolce paired with black truffle mashed potatoes, pancetta, and tomato smothered haricots verts, all under a crowning tangle of thin, crispy fried onion rings. While the strictly authentic Italian provenance of these two dishes might be questioned, there is no denying their distinct appeal.

Seafood lovers will find many items on the Vespaio menu to tempt them. My most recent favorite is the divine Risotto al Zafferano con Frutti di Mare ($25), an elegant saffron risotto cooked in rich seafood broth brimming with buttery diver scallops, sweet jumbo lump crabmeat, and pan-sautéed Gulf shrimp, enriched with mascarpone and chives. There's always a mixed seafood grill on the daily specials menu, and we're told young Samson has a flair for dishes with Tasmanian wild king salmon, so keep an eye out for those on the specials list, as well.

It's usually difficult to contemplate dessert after meals as profoundly rich and satisfying as Vespaio's. However, in the interest of journalism, my intrepid companions at the most recent visit to Vespaio agreed to sample several tempting items from Matt Weaver's dessert menu. The Vespaio version of cannolis ($3.50 each) are delicate, lacy pastry tubes filled with barely sweetened mascarpone and ricotta, chopped chocolate and toasted pistachios. Light and lovely, they are the perfect ending to a voluptuous meal. Those who've dined more judiciously may opt for the Chocolate Soufflé ($7.50), a warm, flourless chocolate cake served with fresh berries, or a definitive Italian chocolate sundae, the Tricolore Gelato Cioccolato ($7.50), bittersweet scoops of decadent chocolate gelato sandwiched between berry and caramel sauces in a parfait glass. I managed to get sidetracked with a tangy Persimmon Gelato ($1.50) this trip, but I plan to treat myself to the rice pudding with Meyer Lemon Curd on an upcoming visit.

All this extravagant praise for the food at Vespaio isn't meant to give short shrift to the bar or the service. The wine list now features some of the distinctive vintages the owners sampled in Italy last fall, and the bar is one of the busiest in town. And while it's pretty much true that I have to leave town to get bad restaurant service, I did notice that our waiter gave equally good service to the other tables in our area. He was friendly and solicitous when necessary, very knowledgeable about the menu, and completely unobtrusive while we enjoyed our friend's birthday celebration dinner; in short, everything a good waiter should be.

Having been in a unique position to observe the culinary evolution of chef Alan Lazarus and his various ventures over the past 30 years, I intend to keep an eye on Vespaio's culinary evolution. I can't wait to see what happens next.