Music to the Mouth 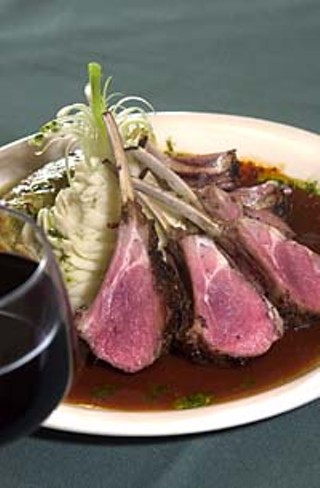 "You're not going to believe who the chef is out there." Fellow Food writer Mick Vann and I were talking before a meeting about a new restaurant opening close to my house. "Raymond Tatum." I was shocked. We were going to have one of Texas' most talented chefs out in my sparsely populated neighborhood (known jointly as the Pedernales Valley and the Willie Ghetto). We were already blessed with good restaurants. R.O.'s Barbecue, Poodie's, and La Cabana all allowed us to stay outside the big city and eat well. But we were missing a "fine" dining option. With Raymond Tatum's name attached, it had to be fine dining.

For newcomers: Tatum is an Austin institution. He cooked for 12 years at Jeffrey's, where he was sufficiently acclaimed for his food that he ended up being featured on the PBS Series Great Chefs of the West. Later, he opened the original Brio on Sixth Street, introducing wildly creative cuisine that was so popular that he was voted Best Chef in Austin by Chronicle readers in 1995. But this seemed too good to be true. Tatum within five minutes of my house? I'm not one to look a gift horse in the mouth, but I wondered who was going to take the financial risk to open a fancy restaurant on Highway 71, 10 miles west of Bee Cave?

As it turns out, the answer is intriguing. Kent and Beth Hayner spent 25 years on the rock & roll road, feeding the rich and famous stars (the Who, ZZ Top, AC/DC, the Eagles, and many more) along with their hungry crews of techs, backup singers, and merchandisers. When the Hayners started, a tour meant feeding about 30 people. In the old days, charbroiled steaks and burgers matched with a fried starch kept everyone happy. Then the tours got larger, the food demands got weirder, and the traveling got harder. They decided to open a restaurant. After working for months converting an old saloon, they were ready to open the BackStage.

One night, my wife and I were heading to La Cabana for dinner when we saw a crowd at the BackStage. It turned out to be opening night, and we decided to give it a try. The place was jammed, the air conditioning was broken, workers were running around looking like deer caught in the headlights. Through it all, the food was good, the service was amiable, and it had the feeling of old Austin. We never review brand-new restaurants because everything changes over the first six months. But it was good enough that I recommended it for a later review in the Chronicle. We gave the place time to settle into a groove, then went back to review it.

Their location used to be a low-end bar. The transformation inside is amazing. What once was a dark cavern with funky smoky smells is now all Hill Country class. The seating is comfortable and intimate, with enough room to talk without worry of eavesdropping. The noise level is blessedly low. Just enough to let you know there's a crowd, but quiet enough that you can hear each other talk. The music is live (on weekends) and much better than the Muzak you hear in too many places. Just enough luscious aroma escapes from the kitchen to whet your appetite. During good weather, you can sit outside on the two-level deck. There's a cool bar, usually hopping with activity and serving great cocktails. Music memorabilia covers the walls. The Hayners are gracious hosts, wandering from table to table, making sure everyone is happy. If you can stop them long enough, they'll even grace you with a couple of touring war stories. (I want to talk about the backstage antics of those nice Young boys in AC/DC.) Though we never waited more than 10 minutes for a seat, the place was always nearly full.

The BackStage menu has many Tatum touches. Southwestern collides with Mediterranean and Asian elements for unique fusion flavors. But this is not the old "let's throw everything together and see if it tastes any good" school of fusion food. Every appetizer we tried worked, blending rich flavors, interesting textures, and fulsome aromas. For instance, the Crab Cakes With Poblano Aioli ($7.95) featured lots of crab, perfectly cooked to maintain juiciness, with a smoky and rich sauce. It smelled like a nice fire next to the sea. My wife ordered the Grilled Portobello With Fresh Mozzarella and Salsa Cruda ($5.95) and gobbled it down before I could even try it. It looked beautiful. I was too busy with my Jalapeño Corn Cake With Crawfish and Gorgonzola Mustard and Red Chile Sauce ($6.25) to feel slighted. It's rich with a tongue-surprising twist from juxtaposing the earthy Gorgonzola with the sweet corn and just-barely hot peppers. This appetizer is so good, and so rich, I could make a main course from it.

Speaking of main courses, they have seven non-steak entrées as well as 13 steak offerings. Tops on my list was the House Cured Smoked Pork Rack With Red Chile Jus and Pineapple Ancho Chile Chutney ($17.95). Almost 2 inches thick, tender, juicy, and imbued with a delicious smoky flavor. The Red Chile Jus added just a hint of heat and the pineapple chutney enhanced both the smokiness and spice. Delicious. We ordered a nicely priced bottle of St. Francis Old Vines Zinfandel ($35), wishing that we found a few more Texas wines on the list.

My wife had the 24-ounce Porter House Steak ($36.95). That kind of pricing is reminiscent of Downtown, so she expected a lot. She ordered it medium rare, and it came out with a nice tinge of caramelized crust on the outside. When she cut into it, it was raw. Our server, a nice person with more enthusiasm than experience, took it back. When it arrived again about 15 minutes later, I was nearly finished with my meal, but at least they brought the steak up to medium-rare. The quality of the meat was good, and the steak was tender and juicy. We ended the meal with a slice of Coconut Buttermilk Pie ($4.95) that was delicious with a flaky crust and tangy filling.

A week later, we went back to try some other dishes. I checked the Jalapeño Corn Cakes one more time to make sure they were consistent. They were just as delicious as before. We ordered two entrées. The panko Fried Shrimp With Poblano Aioli ($17.95) was coated with a delicate crispy crust. If you haven't tried Panko yet, you're in for a treat. It's a Japanese breadcrumb used for giving fried foods a new textural dimension -- fluffy and crisp at the same time. The shrimp were large without being huge and cooked perfectly. The Cilantro Shrimp With Udon Noodles in a Spicy Ginger Garlic Sauce ($18.95) was classic Tatum. Thick, delectable Udon noodles with large cilantro-coated shrimp and a flavor-packed sauce. We found a bargain on the wine list, the Sonoma Cutrer "Russian River Ranches" Chardonnay ($31) that went perfectly with our seafood meals.

One of our steak-loving friends came along and tried the Bone-In Cowboy Ribeye ($32) and ordered it medium-rare, along with a side of Caesar salad and onion rings. Her steak was well-seared and huge but, again, undercooked. Not enough to return, just enough to be a little troublesome. The quality of the meat was as good as any of the Downtown steakhouses. The onion rings were delicious, but the portion was miniscule. Croutons can make or break a Caesar salad, and the BackStage green chile croutons were excellent.

Out total experience at the BackStage was very good to excellent. Just be aware that if you order steak, expect to pay Downtown prices (the average steak price is $25), and be sure to tell your waitperson precisely how you expect to have it cooked. Instead of saying "medium," say something like, "I want the steak well cooked on the outside and pink, not red, and with a warm center." You get the idea. Personally, I'll be ordering the other stuff. The steaks are good; other than the doneness issues, they are excellent.

But Raymond Tatum's creations go beyond a piece of meat on a plate, and his creative cooking elevates the restaurant far above the standard steakhouse. Tatum's tantalizing food inventions, the nice location, excellent bar, genial hosts, and amusing music memorabilia make the BackStage worth a trip.