Community supported agriculture: the proof is in the produce, and Central Texas consumers are noticing 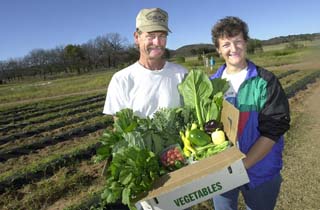 This fall, Kim Wilson has been making a lot of zucchini stuffed with tomato and goat cheese. It's been a big hit not only with her family, but also at parties. Gloria Lee can't get enough of the crisp green peppers sautéed with chicken and fermented black beans. Chris Labuski loves to eat fresh arugula mixed with mashed potatoes. As for myself, I think I will never tire of simple sautéed Swiss chard. We all have different favorites. What we share, however, is a commitment to fresh organic produce and a common source. We are all subscribers to Hairston Creek Farm's Community Supported Agriculture program. Zucchini, green beans, peppers, Swiss chard, broccoli, mustard greens, arugula, and tomatoes: These are the vegetables that subscribers have received this fall in their weekly produce deliveries. No two weeks are ever the same, and it's hard to predict what will appear; but the honesty of eating whatever happens to be growing at the time has a definite appeal to many consumers in Central Texas.

The philosophy behind Community Supported Agriculture (CSA for those in the biz) is simple: Individuals and families purchase a share in a local farm -- that is, they pay the farmers directly to grow the produce they consume over a fixed period of time. With seed money (quite literally) to keep the farm operational, the farmers then supply their shareholders with their weekly produce. It's an elegant compact between the farmers and the community that enables small-scale sustainable agriculture to flourish. And rising numbers of Austinites are choosing this as a means to eat fresh, locally grown produce, instead of the faceless, tasteless supermarket variety. As Thanksgiving approaches and Hairston Creek Farm's growing year draws to a close, I talked to the farm's owners, Gary and Sarah Rowland, as well as to farm subscribers, about the various paths that led them to Community Supported Agriculture. The uniform enthusiasm for the program was infectious, and it was obvious that both farmers and subscribers had something to be thankful for.

Enfolded within a fertile creek valley just south of Burnet, the Hairston Creek Farm is one of those unbelievably picturesque places that you only see on the cover of tourist literature. With dramatic vistas of the surrounding hills and a pastoral pecan-lined creek winding along the edge of the property, it's easy to see why the Rowlands have chosen this lifestyle. Life out on the farm moves at a slower pace than in the city. Their 4-year-old son, Henry, runs wild over their 34 acres. The silence there is so loud it's deafening, broken only occasionally by a passing car, a rooster crowing, or the low bellow of their neighbor's buffalo.

"Farming is a bit like being called to the ministry," said Gary as he stooped to pluck an oriental cucumber from the vine. "It comes from within ... my father sold insurance, and I knew I didn't want to do that." So after spending a stint in Bermuda working for the Department of Agriculture, Gary decided to move back to Texas in the late 1980s and try his hand at small-truck farming. "It's not just a profession, it's really more of a lifestyle," says Sarah, a former legal secretary from Canada who got into farming after she married Gary in Bermuda and after their second child was born. Initially, the farm was a way for Gary to do what he loved, while Sarah stayed home with the kids. But a decade later, with 17 acres under cultivation and several hundred people depending weekly on the Hairston Creek Farm produce, Sarah finds herself taking an active role in the business. She not only helps grow the produce, but also makes the pestos, pickles, and jams that the farm offers in its plus shares. In addition, she also maintains their Web site and produces the weekly newsletter.

When they started the farm 12 years ago, the Rowlands both knew that if they were going to succeed at small-scale farming, their produce would have to be organic. In order to compete with federally subsidized agribusiness, Gary and Sarah needed to offer a product that couldn't be purchased at local grocery stores. At that time, the organic movement was just getting going, and it seemed like a perfect niche for the small farmer. They were right. Organic farming is now the fastest growing segment of American agriculture. They began by selling their produce at local farmers' markets in and around Central Texas. Later they started wholesaling to local supermarkets and grocery stores.

It was kismet that led them to the CSA shares two and half years ago. Though they had been considering it for some time, Gary and Sarah initially hesitated to try it, fearing that the contract of mutual commitment between buyer and grower might become burdensome at some point. Within the space of a few weeks, though, they received a flood of inquiries about whether they offered subscription shares. "We'd been frustrated with trying to wholesale and with farmers' markets for a while, and that sort of decided for us," recalls Gary. They began timidly with six subscriptions in 2000. The next year they doubled the number. It was only this year that they fully committed themselves to CSA share farming. It's a decision that has paid off. Despite a late freeze in April, devastating rains in June, and a plague of grasshoppers in July, the Rowlands still manage to fill their subscription orders, though not with quite the variety they originally planned. But that's where community support really resonates. Through the financial support of the farm's shareholders, the Rowlands averted the economic damage wrought by natural disasters and were able to continue planning and planting for next year. Had they attempted to wholesale this year, they wouldn't have had enough of one crop to really make it work.

But the benefits are not just one-sided. For the farm's subscribers, the produce deliveries are "like having Christmas every week," according to Kim Wilson. She loves the surprise of never knowing what vegetables she'll have. Since she has been subscribing to Hairston Creek Farm, she has seen a radical shift not just in the way she cooks, but also in the way she thinks about food. "I have come to learn that ingredients are just as important as the recipe," says Wilson, a doctoral student at the University of Texas who feeds her family of four from the weekly produce she receives from the farm. Instead of going to the supermarket with a list of ingredients, the ingredients now come to her, and she plans her menus from them. Being a part of a CSA program has changed the way Chris Labuski eats also. "It simplifies my life because I don't have to make as many decisions about what I eat, but at the same time, it has expanded the variety of vegetables I enjoy." Gloria Lee, one of the farm's original subscribers, participates not just because she wants fresh organic food for her family, but also because "it helps me develop a sense of community; it makes me aware of the seasons and the weather, and the things I take for granted."

For Lee, CSA farming represents a solution to the biggest problem facing produce consumers right now, which is how to get fresh, locally grown organic produce into the average home. Though organic farming may be agriculture's new darling, its boutiquey reputation, coupled with the sometimes prohibitively high price of organic produce makes it out of reach for many families. CSAs make sense to people like Gloria Lee and Kim Wilson, though, precisely because it is so accessible. Despite Hairston Creek Farm's accessibility, CSAs aren't for everybody. "You have to develop a system, to get used to the rhythm of the seasons and the flow of produce, to really make it work," says Lee. I would add that most of the people I interviewed are exceptional cooks. They cook almost every day; but more importantly, they are open and creative in the kitchen. They can work with the ingredients they have to make their ingredients work.

One box costs $25 per week and is enough to feed a family of four non-vegetarians or two vegetarians. The quality of the produce is generally exceptional, and the weekly variety is diverse. Hairston Creek Farm grows asparagus, artichokes, eggplant, tomatoes, cucumbers, squash, zucchini, peppers, beets, Swiss chard, arugula, lettuces, mustard greens, broccoli, green beans, peas, black-eyed peas, okra, corn, potatoes, onions, cauliflower, turnips, radishes, strawberries, blackberries, plums, melon, and herbs. Plus-share subscribers receive eggs and jams, jellies, or pestos. Starting in April they plan to expand to 100 subscriptions. The season runs from April to Thanksgiving. They have various convenient drop-off points in and around Austin. This year's season has just ended, but the Rowlands are taking subscriptions for next year. For information on how to subscribe, visit their Web site at www.moment.net/~hfc or call 512/756-8380.

For more information on other area farms that offer subscription shares, visit austinchronicle.com/issues/dispatch/2002-11-01/food_second_all.html.