Cheese, in all of its artisanal, aromatic glory, takes its rightful place at Austin's tables 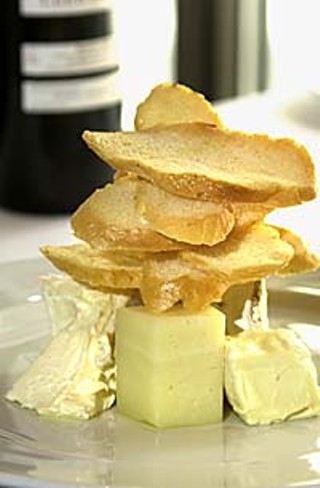 The cheese plate at Jean-Luc's Bistro (Photo By John Anderson)

The Ptarmigan Dining Room at the Many Glacier Hotel in Montana's majestic Glacier National Park was the site of my first college summer restaurant job. In the busy restaurant overlooking sparkling Swiftcurrent Lake, I learned to fold decorative napkin crowns, to carry a tray of entrées high above my head without dropping anything, and to fillet a rainbow trout at the table without touching the fish with my fingers. It was there I was also shocked to learn that some people actually ate cheese for dessert! As a 19-year-old daughter of the Southwest, with generations of Southern heritage, I knew dessert was pie, cobbler, cake, shortcake, custard, ice cream, sometimes even fresh fruit, but never cheese, and certainly not runny, stinky cheese in the bargain. No way. In retrospect, the cheeses on that Ptarmigan Room menu were far from stellar. In fact, they were individually foil-wrapped servings of manufactured generic Bries, Camemberts, Goudas, and Emmentals presented at the table with a basket of fancy packaged crackers and such fruits as grapes or slices of apples and pears. In two summers of waiting tables, I never willingly served one cheese plate.

It was another 10 years before I encountered another cheese plate, this time in the dining room of the Grand Hotel on Mackinac Island, the historic Midwestern bastion of graceful Continental dining. I was much more sophisticated about cheese plates at this point, realizing that many European and even some well-traveled American tourists appreciated the post-prandial cheese option in a resort dining room. As a busy pastry cook, I took little notice of the cheese plates because they were served from the garde manger department and simply meant I'd have a few less desserts to replace for the next meal. After a five-month season in that particular resort job, I returned to Austin to work as a restaurant pastry chef, caterer, and wholesale dessert maker. The only cheese plates I saw for years were of the cubed cheese and toothpick variety (augmented by the occasional wheel of Brie) invariably included in most catered party spreads.

The American culinary revolution really picked up speed in the Eighties and Nineties and had many auxiliary benefits: Chefs went from poorly paid tradespeople to respected professionals (on their way to becoming media celebrities); cookbook sales soared; TV cooking shows proliferated; dining out became the new theatrical entertainment; and America's perverse pride in being the home of vapid processed cheese food products finally began to wane. Talented entrepreneurial cheesemakers in Northern California, Vermont, upstate New York, and Dallas created excellent artisanal cheeses and began developing a loyal base of more educated consumers. Toothpicked cubes of processed cheese food, manufactured blue cheese crumbles, and sandy imitation "Parmesan" didn't disappear, mind you, but real cheeses, both foreign and domestic, in all their flavorful, aromatic glory, began to appear on restaurant menus and in the deli cases at upscale gourmet shops. Austin even had its own gourmet cheese shop in the late Seventies, the far-ahead-of-its-time Quel Fromage, in the 26 Doors shopping center. But it was a long, dry spell for local cheese aficionados from the early Eighties demise of Quel Fromage until the expanding diversity of cheese departments nurtured by homegrown local grocers, first Whole Foods, then Central Market, and more recently, specialty retailer Grape Vine Market.

With more diverse cheese selections finally available for retail sale, changes in restaurants followed suit. Diners became accustomed to regular servings of fresh American goat cheese, Greek Feta, Munster, real Parmigano-Reggiano, and all manner of triple-cream Bries. As diners became more sophisticated consumers and a greater selection of American regional and international cheeses could be located, chefs began working cheeses such as Stilton, Gorgonzola, Manchego, Fontina, Dry Jack, and Cabrales into their menu items. By the mid-Nineties, a few upscale major market restaurants (New York, Los Angeles, San Francisco, New Orleans) began to offer cheese boards, carefully chosen selections of cheeses for both appetizers and dessert accompanied by wine pairings. In the past couple of years, cheese plates have debuted on some Austin restaurant menus, as well. I recently had some enlightening conversations with a few local restaurateurs who are enthusiastic enough about the state of cheese to gamble on enticing the public to try it. The general consensus is that it's slow going at first, but as Austin grows and the dining public gets more adventurous, cheese is becoming an easier sell.

"Cheese is still somewhat of a novelty item in Austin, so all I can say is thank God for the TV Food Network," says Grape Vine Market cheesemonger Ike Johnson with glee. "Once people see more about cheeses, they're more willing to experiment with new things." The self-taught Johnson is passionate about cheese, and he's excited to see the growing interest in the carefully chosen and somewhat exotic (for Austin) cheese selection he offers at Grape Vine's deli counter. He presents popular, regular cheese seminars at the store and preaches the gospel of cheese to sold-out crowds at events like the annual Texas Hill Country Wine & Food Festival. Johnson also shares his ever-expanding knowledge of cheese with such interested parties as Trulucks wine manager Dave Mattern and Green Pastures chef Charles Bloemsma, who are interested in incorporating more cheeses into their appetizer (Trulucks) and dessert (Green Pastures) menus.

"To be honest, we put a cheese plate on the dessert menu and couldn't give it away," reports Trulucks Mattern ruefully, "but Ike made some suggestions about cheeses we could serve as appetizers with wine flights, and that's working out much better." Bloemsma attends Johnson's cheese seminars when he can and is determined that a cheese plate will be a regular feature on the Green Pastures dinner menu. "Right now I've got an Italian tartuffo, a Manchego, and a Roquefort that we're serving with toasted nuts, fresh berries, and French bread," he explains, adding that he finds "customers who are looking for a more leisurely dining experience" are more likely to choose a cheese plate with champagne or a glass of port. It's a process of patience and education.

Austin's original French bistro, Chez Nous, has offered Brie on its dessert menu for the entire life of the restaurant. In the past three or four years, they've also added to the menu two- and four-selection cheese plates made with such traditional French favorites as chèvre, Gruyère, Roquefort, Munster, Cantal, St. Marcellin, and Delice de Bourgogne, depending on market availability. The cheese plates are served with sliced apples, toasted walnuts, French bread, and butter, and are selling mainly as appetizers rather than desserts, according to Chez Nous co-owner Sybil Reinhart.

Before Shawn Cirkiel purchased Austin's other French bistro last year, he spent time in restaurants on both the East and West coasts, where cheese courses were much more common than they are locally. At Jean-Luc's Bistro, Cirkiel is committed to serving the finest French cheeses he can get his hands on. Learning by doing, the young chef is building relationships with various cheese importers and other local chefs interested in selling cheese, all in an effort to get the best cheeses at the best possible prices. At Jean-Luc's, cheese plates are presented as simply as possible with good bread and informed wine selections. Cirkiel provides his staff with detailed descriptive information (type, area of origin, characteristics, etc.) about each selection on the cheese plate, plus a list of appropriate wine suggestions. Cirkiel is happy that a portion of his regulars have a desire to experience new things and are willing to accept his suggestions regarding cheese courses with generally positive results. However, he cheerfully admits that sometimes "when we're serving a (particularly aromatic) Vacherin, we'll get complaints about the odor, not from the people who ordered the cheese, but from people sitting close by."

That wouldn't be a problem for DemiEpicurious Executive Chef Robert Barker, who says his personal tastes in cheese run to stinky, "the stinkier the better." Barker comes to Austin after stints at Spago in Los Angeles and Emeril's in New Orleans, both restaurants with full-fledged cheese programs. He's proud to say that his four- and six-selection cheese plates usually sell briskly, and he looks for a mixture of European and American artisanal cheese to present his customers. With the high cost of small-batch, handmade cheeses plus shipping, a cheese program in Austin can be a dicey, pricey proposition. "It's still a gamble what we're doing," Barker explains, "because if something doesn't sell on the cheese plate, you have to work it into a menu item. Sometimes you end up with a $50 pan of mac and cheese." (All the chefs at our roundtable cheese meeting nod their heads in agreement here.)

In an effort to offset shipping costs and get more bang for their cheese buck, Shawn Cirkiel, Robert Barker, and Emilia's chef Chris Lanier sometimes pool their orders to such purveyors as Formaggio in Boston and Cheeseworks in both California and New Jersey. Emilia's has offered a cheese plate on its menu since opening nearly two years ago, and Lanier finds that even though guests are still somewhat unsure about ordering cheeses, "they love this plate when they get it." On his dessert menu, Lanier focuses on American artisanal cheeses from small independent farms, offering cow, sheep, and goat's milk cheeses such as his current plate that includes Old Chatham Sheepherding Company of Hudson Valley, New York (sheep), Sally Jackson of Washington (goat), and Point Reyes Farmstead of Northern California (cow). Emilia's also serves European cheeses by the ounce in the bar, and knowledgeable sommelier Anthony Garcia is on hand to make informed wine pairing suggestions to complement both the appetizer and dessert menus.

Sales figures for appetizer cheese boards are not likely to overtake chile con queso and chips here in the land of Tex-Mex in the near future, any more than dessert cheese plates will completely replace decadent slabs of chocolate truffle cake or steaming bowls of peach cobbler ô la mode. However, the Austin dining public is indeed warming to the power of cheese. Just recently, a local caterer bemoaned losing a bid because of a cheese selection that "wasn't sophisticated enough," and Pure Luck goat cheese maker Sarah Bolton of Dripping Springs has diversified her product line to include a blue cheese (see "Pure Luck in Armenia," p.48) and the brie-like Del Cielo in the hopes of attracting more business from restaurant chefs. Take a chance: Have a cheese plate and a wine flight for dessert some evening, or step up to the cheese counter at Central Market or Grape Vine Market and ask for a taste of something new and exotic. The cheese can definitely stand alone.