Lakeside dining 2002: by boat or by car, bring your appetite 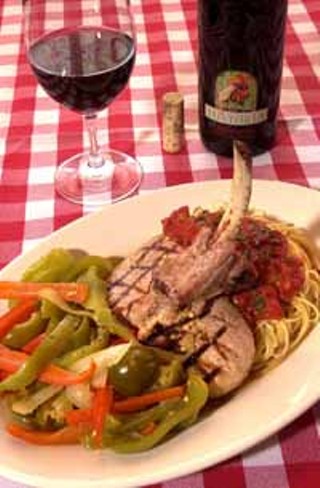 The dinner menu here is decorated with photos of the original Ciola's restaurant in Virginia Beach, Va., circa 1949, and individual dishes are named for proprietors Uncle Domenick and Aunt Alice. Earlier this year, the Texas branch of the family, Dan and LeAnne Ciola, opened a sister restaurant in the Lakeway Plaza shopping center and the friendly younger sibling has been attracting a loyal clientele ever since. All evidence of its strip-mall location disappears once you're inside Ciola's: It's a very attractive space with a clubby kind of feel to it. The bar and dining rooms are tastefully decorated and obviously designed for comfort -- large, deep booths, comfortable chairs at the tables, a private room for banquets, and curtained alcoves for those little romantic dinners. Everything about the décor and the service at Ciola's makes you feel right at home. Frank Sinatra, Dean Martin, and Louis Prima on the sound system create just the right atmosphere in which to enjoy yourself over Italian food.

A friend and I were one of a few tables enjoying a late lunch at Ciola's on a recent weekday. Meals here begin with a basket of delicious crusty homemade bread sticks and chewy focaccia with herbed olive oil. Our appetizer of Baked Artichokes with Crostini ($6.95) was a large casserole of tangy artichoke hearts bubbling with three cheeses, accompanied by crisp, salty garlic crostini for spreading. It was more than enough for two to share and very tasty, though the excessive salt on the crostini was a distraction. The Shrimp and Fennel Salad ($7.95) -- a rare find on Austin menus -- is a delightful salad of thinly sliced fennel tossed with a vinaigrette and surrounded with plump gulf shrimp and fresh orange slices. The anise-like tang of the fennel paired with the sweet, astringent flavor of the orange nicely complemented the toothsome shrimp. The salad, too, was large enough to share or order for a light lunch with the house bread. Determined to sample at least one of the namesake dishes, we chose Aunt Alice's Spumoni ($4.95) for dessert. According to proprietor Dan Ciola, the recipe for the decadent four-layer (chocolate, strawberry, vanilla, and pistachio) frozen confection laced with liqueurs, glacéed fruits, and chopped pistachios, is a treasured family heirloom. If the rest of the Ciola family recipes on the menu are as good as the spumoni, they should certainly be worth another drive to the lake.