In Austin, Casey's New Orleans Snowballs has become a model of small business, while packing in flavor, fun, and family 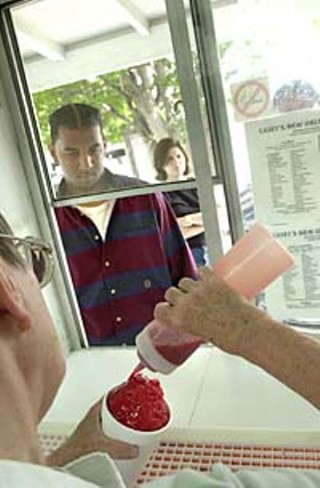 "It's a lifestyle choice," says Suzy Casey Gallagher of the pair's decision to pursue seasonal work that packs a whole year's labor into six months and three weeks. "It's a very pleasant business," adds Kit Thompson, the anthropologist. "I'm studying human nature every day. I find it fascinating, still." (Photo By John Anderson)

Near the busy northeast corner of 51st Street and Airport Boulevard, where residential and commercial zoning meet, stands a modest white-frame structure that was once somebody's home -- but no more. This is Casey's New Orleans Snowballs. Here, nine hours a day, seven days a week, mid-March to early October, Suzy Casey Gallagher and Kit Thompson ply their trade as purveyors of Austin's most spectacular line of the beloved frozen concoctions. Casey's reliably stocks 60 different flavors -- including a handful of family-proprietary custom creams like Casey's Famous Chocolate. Their shaved ice is soft and fluffy; their colors vibrant, their syrups thick, sweet, and lavishly poured. They even offer a smattering of sugar-free choices and juiceballs for health-conscious Austinites.

Ask Suzy and Kit who competes with them and they'll tell you "Nobody!" That's not strictly fact: Competition of sorts comes from a handful of well-placed kiosks around town, from pushcarts, and from the raspas stands that sprout in Eastside back yards when the weather turns steamy. But in truth, the couple is far too busy doing what they do to pay much heed to the competition. "Southern Louisiana has a real snowball tradition," explains Suzy Gallagher, the guiding spirit behind the enterprise and a gregarious New Orleans native with snowball juice in her blood. "The vendors of bar supplies -- cherries and flavors and such -- were the same people who supplied the snowball trade."

The Charles Dennery Company was one of those suppliers back when Suzy was growing up, and her father had a friend who worked there. During the late 1960s, real estate in the Big Easy fell through the floor. "Dad had bought a little piece of property and couldn't sell it," she says, taking up the story. "So he decided to put a snowball stand there, and he prevailed on his friend to help him get started." Gallagher's father set up shop with his two teenage sons. The business prospered. When one brother left town, a sister bought him out. Suzy's siblings still run the New Orleans stand together, on the original lot. She herself chose a different path, obtaining bachelor's and master's degrees in computer science from the University of Southwestern Louisiana and then working as an academic administrator in Lafayette.

By 1988, Louisiana was again in an economic slump, and she was searching for better opportunities. She accepted a lecturer position with UT's computer science department: "I got a 50% raise for moving from Louisiana to Texas." But on the downside, she discovered that, "You couldn't buy a decent snowball in Austin." In 1991, she and Kit, a UT anthropology graduate then working for a mortgage company, began dating. Within a year, they were a business team, as well, ripe for entrepreneurial adventure. Snowballs, given Suzy's background, were an obvious choice. But where to locate?

On a spring day in 1992 -- the tail end of Austin's last real-estate bust -- she noticed the nondescript house up for sale, and immediately recognized its potential. "There was a four-way light at the corner that slows traffic, a grade school [Ridgetop Elementary] across the street ... it doesn't get any better than that!" she laughs now. And the area had an easygoing neighborhood feel that she liked. They bought the place, rezoned, and set about fixing it up. Casey's opened for business in March of 1996. "I like to say this is where Western Europe meets Latin America," says Suzy. "We get all the Hyde Park crowd, and the University crowd ... and lots of Hispanics from East Austin. Right on this spot."

To accommodate their Spanish-speaking customers, they post a bilingual menu, and they've mastered some basic conversational Spanish themselves: words for flavors, sizes, quantities, making change. And, °Tenga un buen dia! or "Have a good day!" Each workday begins around 10am with a round of setup chores. At noon, Kit lifts the first of the12-pound ice blocks they freeze and package themselves from a storage chest into their industrial strength Snow Wizard machine. With five different cup sizes -- junior at 75 cents through jumbo at $3 -- they can't easily track the exact number of snowballs they sell. Instead, it's the ice they monitor, and the liquids. Over the next nine hours they'll typically consume anywhere between 16 blocks (on a quiet day) and a record 33, along with 10 to 25 gallons of syrup and boiled chocolate.

Kit opens the service windows; a customer is already waiting. She asks for Wild Cherry with sweetened condensed milk topping. So it goes ... all day long. People arrive to demand their favorites. The range of orders in a short space of time is astonishing. Mounds Bar. Strawberry Cheesecake. Peach. Hurricane. Dos Limas. Custom Rainbow. And, from a woman with a cardboard box and an RV full of kids waiting, "Give me a dozen, and mix 'em up!"

Flavors are something Kit and Suzy know a thing or two about. Top sellers are the twin old standbys: Strawberry is No. 1 ("by far") and Wild Cherry is No. 2 -- followed by a surprise No. 3: Coconut. Together, those comprise about a third of their business. It's a nationwide pattern, but beyond that, popularity becomes regional. Casey's, for instance, sells a lot of Mango, while Spearmint, Ice Cream, and Nectar -- New Orleans signatures, all -- are curiosities here. "But no self-respecting New Orleans snowball stand could fail to carry them," says Suzy. Eggnog (aka Ronpope) is another popular flavor locally, and Margarita and Piña Colada are also available for those who crave the taste minus the kick. Then, there are the combinations. Basic Rainbow is a pleasing trio of Strawberry, Raspberry, and Pineapple, but they'll pour up to three flavors -- any three per snowball at no extra charge, and pour it as heavy as the customer asks for. "Right up to the top of the cup, if they want it," says Kit. Rainbow's flavors were selected for both taste compatibility and flamboyant primary colors. But not everyone agrees that Rainbow is the way to go. One regular, for instance, invariably requests a combo of Butterscotch, Wedding Cake, and Hazelnut.

Quizzed about their own preferences, Suzy names Chocolate-Covered Cherry ("my favorite, today"). Kit's favorite, today, is Boston Cream Pie, though Margarita with sweetened condensed milk topping runs a close second. ("It tastes a lot like key lime pie.") Does either have an unfavorite? "Bubble Gum will never pass my lips," Suzy grins. A lanky kid wearing an "Austin Recycles" T-shirt appears at the window. He orders Bubble Gum.

Come the off-season, the pair indulges their love of travel: Italy, the British Isles, Boston, New York, the West Coast. Santa Fe. Disneyworld. Maybe Mexico or Big Bend this year. "It's a lifestyle choice," says Suzy of their decision to pursue seasonal work that packs a whole year's labor into six months and three weeks. "It's a very pleasant business," adds Kit, the anthropologist. "I'm studying human nature every day. I find it fascinating, still."

The city of Austin's North Loop planning group has cited Casey's as a model for local small business. And though it remains to be seen how the upgrading neighborhood will develop in future years, Kit and Suzy have a powerful hedge against the kind of upscale encroachment that creates attractive real estate but often drives mom-and-pop operations like theirs away: They own their property.

That's good news for snowball lovers. One hopes Casey's New Orleans Snowballs will be around for a long, long time, giving Austinites the snowball we deserve. °Tenga un buen dia!