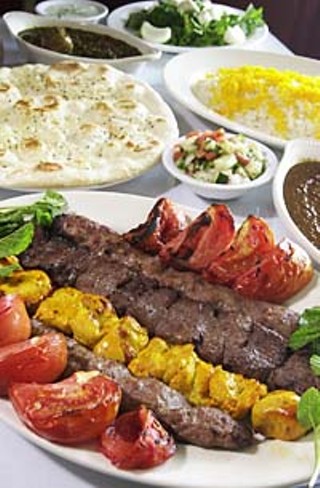 Mohamed Kosari isn't new to the restaurant business. An Austin resident for almost 25 years, the native of Iran got his start working for Mr. Gatti's before he took off on his own, opening a series of pizza places around town, the most recent of which was in the food court of Northcross Mall. He also owned an adjoining food stand called Taco Arriba. A few years ago, he started selling some basic Persian dishes from the Taco Arriba stall, adding Chelo Kabob to his collection of food-court restaurants. Before long, the Persian kabob and rice dishes were outselling the tacos, and Chelo Kabob became a destination for fans of Middle Eastern cuisine in Austin. Encouraged by the success of Chelo Kabob, Kosari decided to purchase a nearby restaurant space when Northcross Mall closed last year. Within two weeks, he and his wife transformed an aging Italian restaurant into Alborz Persian Cuisine. As the doors opened on Alborz, the décor still bore testimony to its former incarnation. Fake ivy twined around plastic grapes, and rope-covered Chianti bottles garnished the walls and tables. Today, the grapes and Chianti bottles are gone, replaced by artwork and trinkets that evoke Kosari's Middle Eastern origins. In its own way, though, Alborz has blossomed into an establishment not unlike its Italian counterpart. Comfortable and unpretentious, it is one of those places that may be as perfect for a first date as it is for a casual business lunch, or even an easy family dinner.

Middle Eastern cuisine isn't well represented in Austin. And the cuisine specifically related to the region known as Persia is particularly nebulous, in part because of shifting geopolitical boundaries throughout the ages. Though Persia has centered around modern-day Iran since the Iron Age, its cultural sphere has diffused through parts of Iraq, Afghanistan, its neighboring post-Soviet republics (the "Stans"), and even into Turkey and India. Persian cuisine comes out of a deeply rooted food tradition that is both exotic and strangely familiar to the American palate. The influence of Persian cuisine on the Medieval and Renaissance European culinary traditions cannot be overestimated. It is said that Persians invented the fork. Persian spice traders brought saffron to the Mediterranean. And long before the Genoese first ground together nuts and basil to make what we have come to call pesto, the Persians were doing it with mint, coriander, and dill to make stews served over rice and bread. Saffron, pomegranates, mint, dill, nuts, lamb, apricots, and sour cherries -- these are the flavors that dominate a cuisine that is at once simple and complex. Its cornerstone dishes are grilled meats, rice, and slow-simmered stews. More simply spiced than their South Asian cousins, Persian dishes incorporate the repetition of a few basic flavors to form an integrated composition that is complex and satisfying -- like a Kilim prayer rug, or an illuminated manuscript.

Alborz captures the essentials of Persia's rich culinary heritage, and presents them in a more formal restaurant setting than the former Chlelo Kabob, although by most standards, the atmosphere at Alborz is still casual and family-oriented. The menu features many of the dishes that made Chelo Kabob such a success. Appetizers include hummus ($4), baba ghannooj ($4), and some excellent rice-stuffed grape leaves ($5) that are minty, lemony, and tightly bundled in their bite-sized packages.

Among the entrées, the outstanding marinated and grilled kabobs continue to dominate customer preference. The Koobideh ($9), a ground-beef kabob, redolent with sumac, onions, and other seasonings, is thoroughly enticing. The chicken-and-beef kabobs ($10) are tender, tangy, and comfortingly familiar to a dining public raised on fajitas and barbecue. A hefty portion of fluffy rice, and a generous serving of tahdig -- the crunchy pot-bottom crust made from rice, bread, potatoes, or sometimes even squash -- give additional substance to an already abundant meal. Aficionados of Persian cuisine insist that the tahdig is the most sought-after portion of the rice, and at Alborz it's easy to see why. Buttery, crunchy, and caramelized, it's delicious moistened with stews or just on its own.

The sit-down environment of Alborz enables the kitchen to offer a number of stews (Koresht) generally not featured on the former Chelo Kabob menu. A simply seasoned, meaty, braised lamb shank, falling from the bone and juicy from its long sojourn in the pot, is one of the more unadorned platters on the menu, though it's also delicious in its homeliness. An altogether different type of stew (Koresh Gheymeh, $9) with beef and yellow split peas is delicately scented by cinnamon, saffron, and tomatoes. This fragrant concoction evokes the rib-sticking substance of a split-pea soup, Persian-style. The Gormeh Sabzi ($9) positively reeks of mint, parsley, and other green things, cooked into a leafy stew with kidney beans and morsels of beef. But perhaps the most intricate of dishes is the fesenjan ($10), a mosaic of a stew made from pomegranate, walnuts, turmeric, cinnamon, cardamom, onions, and garlic. Fesenjan is one of Persia's most praised dishes. Often, it's served with duck or quail; at Alborz it's served atop a more modest baked chicken. Unlike many of the koresht at Alborz, whose flavors are subtle and savory, the fesenjan is bold and lip-smackingly tart. Though I admit I have tasted slightly more sophisticated versions of this dish at restaurants in Chicago and Washington, D.C., Alborz's rendition is certainly competent -- and not to be missed.

The variety of Persian cuisine is astounding. For those unfamiliar with any of its dishes, I strongly endorse the daily lunch buffet ($6.99 on weekdays and $8.99 on weekends), which features more than 20 food items, many of which are not listed on the regular menu. Where else can you get five different types of rice? Pilaf with lamb and dill, pilaf with lentils and sour cherries, pilaf with vegetables, and white rice with saffron form the central dishes from which to build the meal. This rice extravaganza even includes a special warming tray for the tahdig. Stews with beef, stews with chicken, and marinated, roasted chicken are meant to accompany the rice dishes. Additionally, there are trays bearing vegetarian eggplant stews, sweet stews of potatoes and pomegranate, tomato and cucumber salads, yogurt and tomato salad, and lettuce salad. Don't even try to make a decision; instead, sample a smattering of each. And remember that the savory dishes served on the buffet represent only the gateway to the mine of recipes forming the Persian repertoire.

The Persian sweets tradition is equally voluminous. And though Alborz merely scratches the surface of Middle Eastern dessert-making culture, they do offer fine renditions of the well-known baklava ($3) and rice pudding ($3), in addition to lesser known favorites such as zoolbia -- a rosewater-flavored yogurt ($4). A cream-filled rolled cake, called simply roulette ($4), attests to the continuing exchange of traditions between Europe and the Middle East.

As word of Alborz spreads among the Austin community, and as the restaurant begins to attract a larger clientele, it continues to evolve. Kosari briefly featured belly dancers at the restaurant on Friday and Saturday nights, but recently decided that it interfered with the family atmosphere he wanted to cultivate. Alborz will now have belly dancing only once or twice a month. Alborz, as Kosari sees it, is the culmination of his varied restaurant experience; it is here to stay. Hopefully, its success will serve as a model for other Middle Eastern restaurants to open in Austin, serving traditional Persian dishes of quality, and at reasonable prices.