Pit it, and they will come: the Southern Foodways Alliance Taste of Texas Barbecue Trip 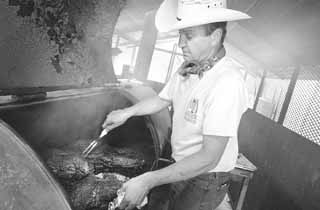 Barbecue is serious business in Texas, and it's an integral part of our state identity. Along with cattle ranches, wildflowers, the oil bidness, and wide-open spaces, barbecue is one of the emblems that we're mighty proud to wear. We take barbecue pretty seriously here at the Chronicle, too. We devote major stories to our favorite local and regional joints every couple of years, and try to assure that South by Southwest guests, movie company players, and visiting dignitaries can find the best places. This weekend, a group of hungry folks will converge on Austin for the express purpose of eating and learning about Texas barbecue. The Southern Foodways Alliance Taste of Texas Barbecue Field Trip, with major financial support from White Lily Foods, takes place this weekend, June 14 and 15, at the Driskill Hotel, the Victory Grill, Threadgill's World Headquarters, and other points around Central Texas. The Chronicle is one of several local sponsors. We've put together an action-packed weekend for these folks, with plenty of barbecue, live music, and libations -- all things people love about Austin. There'll be parties, bus rides, insect repellent, cool T-shirts, sunscreen, picnics in the park, beer, and Big Red. Think of it as a very cool barbecue summer camp for grownups.

Over the past couple of years, I've written about the Southern Foodways Alliance when I've attended the annual fall symposia in Oxford, Miss., and after the wonderful field trip to Greensboro, N.C., last summer. SFA is a group of academics, culinary historians, national and regional food writers, chefs, cookbook authors, and outspoken Southern food lovers who gather every year to study, celebrate, and preserve the traditional foodways of the American South. It was while we were reveling in the bountiful summer foods of the Carolina Piedmont last July that I first found out that the symposium topic for 2002 would be barbecue. I was so impressed with the Greensboro event that I encouraged the SFA board members to consider a field trip to Austin for the summer of 2002. I wanted to throw a great three-day party and give SFA members a crash course in Central Texas barbecue culture, along with large doses of Austin-area food, plus plenty of culinary sightseeing and, of course, live music. The SFA board envisioned a shorter, more culturally oriented event with plenty of barbecue. We compromised. SFA Board President Toni Tipton-Martin and I, along with our dynamite host committee -- Chronicle writer MM Pack, Dawn Orsak, LaDonna Higdon, Hoover Alexander, John Morthland, and Ken Rubin -- have packed about as much food, fun, music, and cultural enlightenment into a 24-hour period as is humanly possible.

After checking in at the Driskill, our guests will be chauffeured to the legendary Victory Grill, where they'll cool off with Live Oak Pilz and Big Barq, sip Boggy Creek Farm Bloody Marys made with Tito's Vodka, and sample some of the best barbecue Austin has to offer. Mel Davis and the Blues Specialists will provide the tunes. We'll have pork ribs from Sam's, ribs from Ben's Longbranch, country-style pork ribs from Artz, John Mueller's brisket, the monster beef ribs from County Line, Certified Angus brisket from BBQ World HQ, chopped beef sandwiches from Ruby's, cabrito from Lambert's, traditional side dishes from Hoover's and the Victory Grill, and fresh fruit cobblers from Kathy Leverett at R.O.'s Outpost topped with Blue Bell homemade vanilla ice cream. That might seem like enough barbecue to last most folks for a while, but our guests will only be getting started.

Saturday will be the real test of a true culinary traveler's stamina. There's a hearty Central Texas culture-clash breakfast in which the South runs headlong into the Southwest over scrambled eggs, grits, and biscuits (with local honeys, jams, and jellies), Czech kolaches, and tacos of El Azteca barbacoa wrapped in fresh, homemade flour tortillas by Maricela Godinez of El Meson Taqueria. Afterward, guest speakers Charles Regan Wilson, director of the Center for the Study of Southern Culture at Ole Miss, and UT history professor Neil Foley will debate where the South ends and the West begins. Then, Clover and Rachel (see below) will provide a rousing musical send-off as guests board big, air-conditioned buses for an all-expenses-paid trip along the hallowed Central Texas barbecue trail! One bus will head north to Taylor, stopping at Louis Mueller's and the Taylor Cafe, before turning south to Elgin. In the uncontested Sausage Capital of Texas, the stops will be Southside Market, Meyer's Smokehouse, and Cross-Town Bar-B-Q. The other bus rolls south from Austin, trekking to Lockhart for visits to Kreutz Market, Smitty's Market, and Black's Barbecue. Farther down 183 South, they'll stop at Luling City Market for pork ribs and then turn for Gonzales, where lamb and beef ribs await them at Gonzales Food Market. They'll get a breather along the way for scenic vistas and liquid refreshments, but eating barbecue at five restaurants in seven hours will be an accomplishment that earns some serious bragging rights.

The great gustatory weekend concludes on Saturday night under the Texas stars in the beer garden at Threadgill's World Headquarters, with local restaurateur/raconteur/amateur historian Eddie Wilson playing host. There will be cookbooks to sign, stories to swap, new friendships to celebrate, and, of course, live music. Planning this culinary event has been a true labor of love, as well as a great education for me. I'm so proud of all the great food, music, and hospitable folks in Austin and Central Texas; I can't wait to show them off to our SFA guests. We plan to send our guests home still slightly redolent of barbecue smoke and, in true summer-camp fashion, with souvenir goodies to somehow squeeze into their suitcases. It's traditional to send postcards home from summer camp, but we're just going to be too busy this weekend, so here's the message: Having a great time. Texas barbecue is fantastic. Wish you were here!