The Taste of Mexico 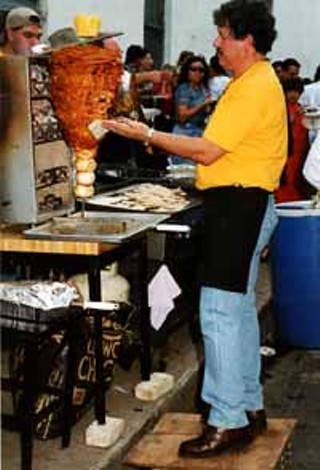 Tacos al Pastor from the Saltillo restaurant El Pastorcito/La Oveja Negra were among the offerings at last year's Taste of Mexico event.

The Taste of Mexico event Thursday evening, May 2, outside Mexic-Arte Museum isn't just an opportunity to sample restaurant dishes in support of a major local cultural center, it's also an exercise in international diplomacy. The annual museum fundraiser is unique in that it presents the signature dishes from more than 30 Austin restaurants alongside those from the top restaurants from one of our sister cities, Saltillo, the capital of the Mexican state of Coahuila. City officials from Saltillo have been coming to Austin as part of the Sister Cities exchange program for Cinco de Mayo celebrations for years. This will make the third year that a group of elite chefs and restaurateurs has joined that delegation. The Saltillo restaurants are included through the participation of the nonprofit Austin/Saltillo Sister Cities Association.

The Sister Cities program was founded in the Fifties by President Eisenhower to counteract Cold War propaganda, creating an economic, cultural, social, and educational presence for American cities in the international community. Austin has been participating in the program since 1968, when we first developed a sister relationship with Saltillo, the long-ago capital of Texas. A delegation from Austin travels to Saltillo in late July every year for that city's Founder's Day celebration, and their counterparts come here for Cinco de Mayo festivities. The governmental, cultural, educational, business, and athletic exchanges vary from year to year; sometimes it's defibrillators from our firefighters to theirs, and other times, it's Ballet Folklorico. The new Plaza Saltillo in East Austin was named for our sister city, and a delegation from the Mexican city proudly attended the dedication of that facility. For more information about the Sister Cities program and a list of all 10 of our sister cities, go to www.ci. austin.tx.us/siscity.

Mexic-Arte Museum director Sylvia Orozco and longtime Austin restaurateur Andy Norton won't be adding "international diplomat" to their résumés, but they are two of the prime movers behind this particular cultural exchange. As founder and director of Mexic-Arte, Orozco helps develop events to promote the downtown facility and raise funds to support its programs. After several years of hosting Frieda's Fiestas dinner parties featuring the recipes of Mexican painter Frieda Kahlo, Orozco and her staff changed the spring fundraiser to a Mexican-style street fair celebrating Cinco de Mayo, a major Mexican holiday. They invited local Mexican restaurants to contribute signature dishes and requested the same from a group of Saltillo eateries as well.

At last year's event, Norton, who owns Hula Hut, took charge of entertaining the Saltillo visitors, extending Austin restaurant hospitality to his compatriots from south of the border. He and his staff helped the Mexican chefs with their last-minute local purchasing and set them up to cook in the kitchen at Miguel's la Bodega, convenient to the museum. The day after the museum event, "we treated them to lunch at the Hula Hut and then gave them a grand tour of the kitchen," recalls Norton. The visitors checked out everything from the organization of the walk-in coolers to the computerized ordering system, the kitchen layout, and the color-coded sticker system used to date food for stock rotation. According to Norton, they asked plenty of questions on topics that ranged from sanitation regulations to sophisticated restaurant software.

Saltillo's restaurant delegation will be headed by restaurant owner Pedro Mooler, president of La Camera Nacional de la Industria Restaurante (restaurant association) for the state of Coahuila. His restaurant, San Pedro de Los Gonzales, will be serving food at the museum event, as will Cherokee Station, El Pastorcito/La Oveja Negra, La Casa de Don Chuy, Restaurante de Mariscos Las Escolleras, and Restaurantes El Principal. After Austin museum supporters have enjoyed the culinary offerings at the Taste of Mexico event, Mooler and his fellow restaurateurs will be the guests of Andy Norton, Greg Koury, and Ahmad Modoni at Manuel's Great Hills for lunch on Friday. "After lunch, we'll give them a tour of this kitchen and then talk shop for the rest of the afternoon. We'll tell them anything they want to know," says Norton. Friday night, the entire Saltillo contingent will be fêted at a reception thrown by Austin major Gus Garcia and then relax at Norton's home, feasting on food and drinks catered by Manuel's. That's international diplomacy, Austin-style.

The Taste of Mexico, benefiting Mexic-Arte Museum, takes place Thursday evening, May 2, from 5-9pm outside the museum (419 Congress Ave.). Tickets are $30 at the door. For more information, call 480-9373.