Austin Land and Cattle Company: a bulwark against food fads 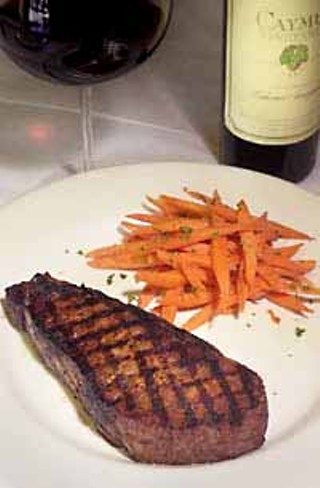 But it is a place that knows what to do with beef. You wouldn't know it by the number of high-dollar meat markets that dot the restaurant landscape now, but children, listen to my tale of days of yore: Some years ago, hipsters clearly informed us that Thai, Indian, Italian, even -- anything but a steak house -- was cool. Not a slave to fashion, Austin Land and Cattle Company proudly flew its steak house flag. It was beefy when beefy wasn't cool. (Well, okay, beef has always been cool in Texas.) These days it seems that you can't circle the block looking for that elusive parking space without encountering a steak house. Austin Land and Cattle Company has been a consistent winner whether or not the food fad brigade gives steak the nod, thanks to the careful attention of chef/owner Christian Mertens and his wife Theresa, who runs the operation from the front of the house.

The reason for the success is that these are folks who know their meat. On a recent bustling Saturday night, four of us found our beef jones thoroughly satisfied and for a lark, we tried their hand at seafood. The building at 12th & Lamar that houses the Company has been home to a number of notable restaurants. The stucco walls, tile floors, cobalt ceilings, white-clothed tables, and flickering candlelight lend it an air of sophistication without a hint of intimidation. A perfectly chilled martini is just right for steak, and the martini was delivered as ordered: dry, dirty, and delicious ($7.25). While contemplating the main event, we split an order of Shiner Bock battered mushrooms ($6) and goat cheese stuffed grilled chile peppers ($7). The mushrooms were exemplary: a piping hot crunchy exterior encasing a plump, juicy interior. They came with a chipotle dipping sauce and seemed like a mountain to tackle, but we managed. The stuffed peppers fared nearly as well. The goat cheese was garlicky as promised, but the red pepper flakes liberally sprinkled over the plate nearly overwhelmed the entire dish. And the grilling of the chiles lent a lovely flavor, but the texture was too similar to the interior, which made the dish less interesting on the tongue.

For entrées, we settled on a New York strip ($25.95) with an addition of two Shiner Bock fried shrimp ($3.25/each), a small filet mignon ($23.95), and a special of the evening: shrimp in an ancho garlic sauce ($21.95). Two diners opted for a baked potato, one for steak fries, and a Caesar salad ($6) was split. The vegetable of the evening, included in the meal, was a simple declarative statement. "Spinach," the waiter said.

The salad was a crispy mound of romaine nicely tossed with a creamy, if tame, version of the favorite dressing. Split between two diners, it was plenty to satisfy both of them, especially after everyone at the table had made a stab (literally) at the mushrooms.

The New York strip was 14 ounces and, split among a younger and older diner, there was plenty of it to satisfy both of them in quantity and quality. My mother is the beef fanatic in our family, so I was eager to see what her reaction to the steak would be. At first bite she indicated it was adequate, second bite the meter rose to good, and by the third she was giving it an enthusiastic thumbs-up. Perhaps the meaty goodness was obscured at first by the crust, perhaps she hadn't allowed the flavor to linger and register, but whatever initial indifference there might have been gave way to pure beef satisfaction. The filet didn't have to win over its diner: My husband nearly swooned over his first bite, and his enthusiasm never dampened as he made his way through the crusty, unusually tasty (for a filet) cut. Both steaks were perfectly medium rare as they were ordered. My husband ordered a roasted garlic sauce to accompany his filet ($1.95), one of several varieties offered. I usually don't care for sauce with steak (I'm a New York strip gal myself, so the meat's the thing there), but with a filet the flavor can often be a bit anemic. A sauce is welcomed on a filet, where flavor seems to be sacrificed for tender texture. While neither of us complained about the sauce, the meat simply didn't need it. The beef flavor sang right through.

The shrimp special was just as deftly handled. Jumbo shrimp were treated with respect and cooked just until done and balanced with a not-too-assertive sauce. The vote was split on the fried shrimp: two in favor, two thought the coating wasn't up to the crunch of the mushrooms. Too long on the plate, perhaps?

The spinach turned out to be a welcome surprise. We're serious spinach fans, so news that it was the vegetable of the day was promising, but when the description is left at "spinach," you've gotta wonder. Rich, creamy spinach is the rule at many steak houses, and while I have no complaints about such a dish, it can be a bit de trop. Our eyes lit up at the simply sautéed baby spinach barely wilted in a garlicky olive oil. Perfect. The spuds were a mixed bag: The steak fries nice and crisp on the outside and fluffy on the inside. The baked one didn't fare so well. The interior was nicely done and as fluffy as the fries, but the exterior was tough as leather, betraying its long sojourn in the oven.

While far from hungry, we took a try at several of the day's dessert offerings. Courtesy of the Texas Pie Company was a raspberry tart ($5.95) and a fudge pie ($5.75 a la mode), and made on-premises was a plate of chocolate flautas ($5). The pies were a success, especially the deeply flavored raspberry one, a single-serving whole pie. The description of the flautas was more appetizing than its actual execution. The chocolate filling really seemed to be housed in an actual tortilla which provided more resistance than a dessert pastry should.

No one would describe Austin Land and Cattle Company as cheap, but it is a very good value for the money. It's the kind of place you go to for life's occasions that roll around more than once a millennium (which is about how often most of us can afford some of the more pricey steak houses). It's a place that says, "Whatever the bellwethers of economy, fashion, and fads may say, here you'll find what you've always craved and will always love." 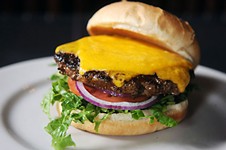