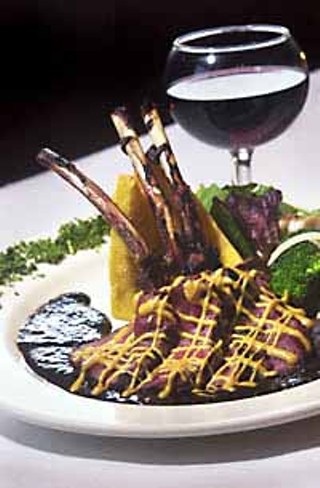 In the Seventies, when I lived on a farm outside of sleepy little Round Rock, about the biggest action to be found on Main Street was a shade-tree checker game in front of the local garage. Now, many years and much, much development later, Round Rock is a vastly different place. One of the cornerstones of the vibrant and revitalized Old Town center is the ambitiously upscale Main Street Grill, housed in the historic Farmer's State Bank building.

Amidst the sea of fast-food eateries and national chains that dominate the suburban Round Rock dining scene, partners Jim McKinney and Jim McNeil, who is the chef at Main Street Grill, have created a quietly elegant oasis whose warm wood, interior columns, and decorative tiled floor gently refer to its former life as a small-town bank, complete with wine cellar and private table in the intact vault. Although the dining space is fairly compact, strategically placed half-walls create the twin illusions of intimacy and elbow-room.

While the restaurant's ambience is uniformly pleasant, the menu contains both high and not-so-high points. The general approach could best be described as primarily American food, with intermittent Asian, French, and Italian touches. Many dishes are excellent, while others need some further work to live up to the standards set by the atmosphere and the prices.

On the up side, the unusual soft house-baked bread that accompanies each meal is stellar. So is the silky and intense Tomato Basil Soup, with just the right note of spicy heat. Monica's Salad is a compelling combination of mixed greens, ripe strawberries, toasted pecans, and bleu cheese, all snappily dressed with Monica McKinney's signature maple balsamic vinaigrette. Shrimp Diablo, available in both appetizer and entrée portions, are large tiger shrimp laced with jalapeño slivers, wrapped in bacon, baked, and drizzled with spicy-sweet ancho honey sauce.

The most expensive item on the dinner menu ($26) is the Asian Seared Venison Medallions. The generous portions of tender venison (farm-raised by J-One-S Ranch in Driftwood) repose in a mildly tart blackberry reduction laced with wasabi. It may sound a little strange, but the combination works quite well. Accompanying is an extremely tasty cheese polenta, crispy brown on the outside while the interior is absolutely creamy and soft as a cloud.

A somewhat less successful presentation is the New York Strip au Poivre served with a small mountain of garlicky mashed potatoes. While the meat I had was cooked perfectly medium-rare, the ratio of gristle was too high for a $25 steak. The pepper cream sauce had a pleasing flavor, but was marred by a profusion of whole black peppercorns rather than the traditional (and far more palatable) crushed black or green peppercorns.

Another dish that disappointed was Pasta Bolognese. Traditionally, Bolognese means a slow-simmered meat ragu enriched with cream. In this instance, the penne is served with a rough and spicy tomato sauce containing large chunks of Italian sausage, and capped by a thick mass of melted mozzarella. Not necessarily a bad thing, but not Bolognese.

Desserts are an area where Main Street Grill really shines, but be warned -- the portions are huge. My favorite is Apples Jubilee, which, despite the name, is a beautifully simple, freeform apple tart, redolent of pie spices wrapped in a tender short crust, and served with or without vanilla ice cream. I am also impressed by the very rich Pecan Pie Bread Pudding, a great idea that combines classic bread pudding with pecans and caramel sauce. Chocolate aficionados will be pleased with the molten flourless chocolate cake, swimming in a bittersweet chocolate sauce.

Main Street's wine list is an eclectic and interesting selection of primarily California wines augmented by some Australian and French offerings. Happily, all but a few of the most expensive wines are available by the glass, encouraging diners to taste adventurously. Beginning this month, the restaurant is hosting a series of wine dinners with vineyard speakers and five-course prix fixe menus to complement the featured wines.

Along with the food and surroundings, quality of service is one of the hallmarks of a fine-dining establishment. The service at Main Street can sometimes be a bit slow, but the waitstaff is knowledgeable about the menu and enthusiastic, though occasionally a bit rough around the edges.

Main Street Grill is a very welcome and much needed addition to the dining scene in Round Rock. With continued fine-tuning and vigilant attention to details, it certainly has the potential to become the white-tablecloth destination it is striving to be.