Restaurants on the Road 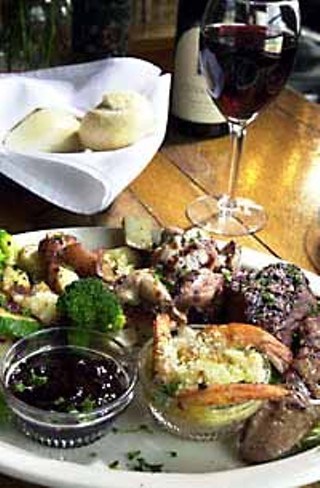 Nestled alongside the railroad tracks in downtown New Braunfels, the Huisache Grill offers quaint small-town charm and big-city food quality without big-city prices. The restaurant is named for the scrubby huisache, or sweet acacia tree, that's native to an area ranging from the Texas Hill Country to northern Mexico. An early spring bloomer, huisache was revered as a medicinal plant among Native American and Mexican peoples and, among Anglo settlers, as a harbinger of good weather to come. Owners Lynn and Donn Forres named their restaurant after the huisache because, in their minds, the native vegetation provides a "thread between the many cultures of our rich native heritage, just as our cuisine reflects varied influences."

The Forreses obviously invested the same kind of creative thinking and attention to detail in renovating the Twenties-era building that houses their comfortable restaurant. Each dining room has its own pleasant personality, with decorating touches such as chandeliers festooned with whisks, quartz crystals, wine glasses, and kitchen gadgets in one, a long wooden bar and inviting corner fireplace in another. There is even a sun-dappled patio for alfresco dining in good weather. It's a very popular place among area locals that's fast developing a reputation all over the Hill Country.

On a recent blustery winter weekend, we were seated in the back dining room with a warm fire blazing behind us and a view of the attractively landscaped courtyard beyond the floor-to-ceiling windows. It made a perfectly lovely place to eat and while away a Saturday afternoon. The Huisache menu does offer an eclectic mix of choices with differing ethnic influences, but the fusion doesn't extend to a ridiculous level. Rather, they've chosen dishes of varied cultural provenance that happen to complement each other well. For instance, the appetizer list features a Broiled Spinach and Artichoke Dip ($4.50) chock-full of tangy artichoke hearts and tender spinach served with crisp parmesan crostini alongside the area-standard Tex-Mex chips and salsa ($3) and wedges of fried brie ($4.50) with brandied peach sauce. Salads are equally diverse, with an all-American Waldorf Chicken Salad Plate ($7.75) on the same list as a grilled chicken salad ($6.95) with a Mexican flair and a marvelous grilled shrimp salad ($7.50) that's a variation of the classic French Salade Niçoise. The friends who dined with me that day make regular pilgrimages to the Huisache specifically for the shrimp salad, and now I understand why. It's made with fresh, tender field greens, new potatoes, grilled artichoke hearts, olives, tomatoes and slices of boiled egg topped with a generous serving of perfectly cooked shrimp and a tangy vinaigrette. It makes either a very satisfying meal in itself or a great salad to split before an entrée.

The sandwiches each have a zingy Southwestern touch, with chipotle in the mayo on both the grilled portobello ($5.95) and the grilled chicken ($6.75), while raspberry chipotle sauce is paired with pork tenderloin ($6.75) and an orange-cranberry horseradish sauce spices up the turkey club ($6.50). The hearty grilled portobello sandwich is dressed with grilled tomatoes and red onions, fresh spinach, and melted mozzarella cheese in addition to the zippy pepper spread. Paired with a side of crisp fries and the house fresh lemonade, it made a wholesome and filling vegetarian lunch.

Entrées at the Huisache are the requisite steaks, seafood, chicken breasts, and pasta, but don't confuse "requisite" with simply regular, because each dish has its own distinct personality and definitive sauce. All entrées come with a choice of soup or salad plus a daily vegetable medley and bottomless baskets of warm sourdough rolls. The Mixed Grill ($15.95) features a grilled stuffed quail, three rather bland shrimp scampi, a perfectly medium rare petit filet of beef, and links of spicy Broken Arrow Ranch wild boar sausage with a blueberry port wine sauce. With the exception of the lackluster shrimp (not nearly enough garlic to call them scampi), the Mixed Grill is a straightforward Central Texas treat and about $10 cheaper than the same collection of items would be in an Austin restaurant. The Pecan Crusted Pork Tenderloin ($11.95) is equally appealing -- toothsome medallions of succulent pork paired with a tangy cranberry-port wine sauce and roasted potatoes hearken back to New Braunfels' German heritage.

When dining at the Huisache Grill, it's imperative you save room for dessert. On our most recent visit, the Hot Fruit Crisp ($4.50) with vanilla bean ice cream was thick slices of peaches topped with a crunchy brown sugar crumble that made a delightful counterpoint to the rich, melting Blue Bell. A dainty slice of Key lime pie ($4) was puckery tart and silky smooth, while the fudge cake with rum sauce and ice cream ($4.50) at a neighboring table had "next time" written all over it.

This is a restaurant designed to provide satisfaction and good value for the money. The W.C. Fields quote above the bar says it all. "We lost our corkscrew and were compelled to live on food and water for several days." Whether or not you lose your corkscrew or just decide to lose the chain restaurants along the highway, the delightful food at the Huisache Grill will sustain you.