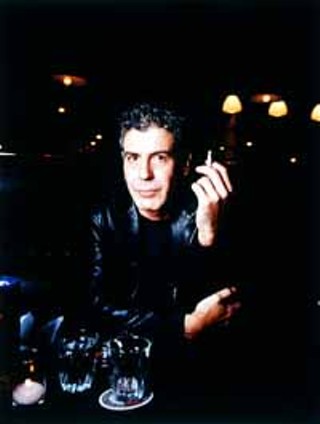 In their continuous pursuit for new programming ideas, the folks at the Television Food Network have come up with a new slate of shows under the banner "Taste the Adventure." These shows feature chefs as hosts and are part cooking show, part travelogue, and part reality TV. The newest of these programs, A Cook's Tour, debuted on January 8, with New York chef and author Anthony Bourdain as the host.

A few years back, Bourdain wrote the best-selling Kitchen Confidential (Bloomsbury, $14), a tell-all tome exposing the underbelly of the New York culinary scene. This year, he's back with A Cook's Tour (Bloomsbury, $25.95), the behind-the-scenes tell-all companion volume to the new show. Having read the book before viewing the debut of the TV series, I would recommend you do the same. The in-depth background information provided in the book really illuminates the footage that has been chosen to put on the screen.

Enjoyment of the television version of A Cook's Tour requires that you overlook Bourdain's faux dramatic voice-over in the opening credits where he vow's to seek "extremes of emotion, try anything, risk everything ... with nothing to lose" in his pursuit of the perfect dining experience. The edgy music and jerky, hand-held camera techniques used to create tension and excitement are also a distracting contrivance at some points.

The series debuts with the chef's trip to Tokyo in search of the freshest classic Edomae sushi. Bourdain is an interesting host. Seemingly bemused to be on television at all, he is often shy and self-deprecating, referring to himself as "ignorant but enthusiastic" in the presence of Edomae sushi master Kiminari Togawa. The food photography in segments where Bourdain follows Togawa-san around Tokyo's Tsukiji fish market and back to his kitchen for the sushi preparation is a fast-paced, colorful assault on the senses that bodes well for the remainder of the series. We then witness our host and his local guides devouring an elegant sushi meal and exclaiming its perfection, a portion of the show that made me wonder what Bourdain will use for adjectives after a few weeks if he encounters many good meals. I intend to tune in every week, with my copy of his book in hand. I'll watch the show and then have another good laugh, re-reading what really happened in pursuit of that 22 minutes of television.