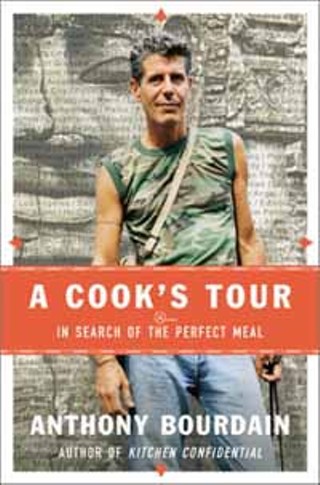 Still looking for that last-minute present for the hard-to-buy-for foodie on your Christmas list? If you consider Bobby Flay vapid and Emeril's wild machinations make you cringe, if you found 1999's Kitchen Confidential wildly entertaining and you're wondering what chef/author Anthony Bourdain has been up to since he wrote the salty and ribald tell-all kitchen memoir, have I got the book for you. Bourdain's newest offering is A Cook's Tour: In Search of the Perfect Meal (Bloomsbury, $25.95), wherein the brash and opinionated chef turns his culinary travels into an extreme sport. The book is a companion piece to a 22-part series for the Food Network which debuts on January 8, 2002. With lusty abandon, Bourdain embarks on an around-the-world tour in search of culinary revelations with a FN crew always in his wake. He savors everything from hashish and roasted lamb's testicles with blue-clad nomads in the Moroccan desert to vodka marathons, saunas, and a shriveling dip in the icy waters of St. Petersburg. The travelogue is liberally seasoned with Bourdain's caustic wit and offers several reasons "Why You Don't Want to Be on Television," in which the author explains how after relentlessly slagging on-air chef/hosts, he's become one himself. Bourdain's gonzo writing (and living) style may not be every reader's favorite dish, but he's certainly not a warm and cuddly travel director or an amusing buffoon. The press material that accompanies the book compares him to everyone from Hunter S. Thompson to Lou Reed to Marco Polo. My personal take on the author is that he is just such a ... guy, and reading about his latest exploits made me laugh out loud. I can't wait for the television show.

Since I'm now a well-established fan of food movies, Dobie Theatre (21st & Guadalupe, 472-3240) house manager Keith Garcia was kind enough to turn me on to the two newest food movies that will both be showing at the Dobie during the holiday season. My personal favorite is Dinner Rush, a delightful indie production directed by Bob Giraldi who is both a restaurateur and a longtime director of commercials and music videos. The film is set in the fictional Gigino's Trattoria, a 25-year-old TriBeCa restaurant that for years served as the front for a mobbed-up bookie joint and is now an ultra-trendy spot with a hot star chef. Longtime proprietor Lou (Danny Aiello) has lost his partner and his sports book to some thugs from Queens and ponders turning the entire restaurant operation over to his son Udo (Edoardo Ballerini), the egomaniacal chef now famous for his Nouvelle Italian cuisine. During one dinner rush, the action flows swiftly from the dining rooms to the downstairs kitchen and back again, artfully weaving together stories of gambling sous chefs, Mafia hoods, newspaper food critics, knowledgeable bartenders, and charming hit men into a tasty and satisfying dish. It will be interesting to see if any local Italian restaurants decide to tackle Udo's Montauk Lobster with Vanilla Shallot Champagne Sauce and Fried Angel Hair pasta (the recipe is in the press kit). This film is a definite possibility for a future food movie festival. It opens this weekend at the Dobie.