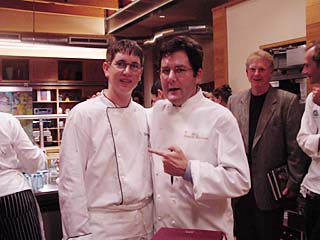 Fans of Charlie Trotter braved thunderstorms and tornadoes last Thursday to attend a cooking class taught at Central Market. Kicking off the Texas Book Festival, the Chicago-based chef and owner of the internationally renowned Charlie Trotter's restaurant demonstrated recipes from his new cookbook, Charlie Trotter Cooks at Home. Unlike his previous coffeetable volumes, which contain glorious color photos of each impossible dish, this cookbook includes no illustrations. Its simpler recipes are designed for the home cook, although most people may still find dishes such as seared tuna with wasabi sauce on homemade cumin crackers a bit too labor intensive for everyday preparation.

As the packed classroom lined up at the Central Market cooking school solely to learn the secrets of Trotter's sculptural cuisine, they were no doubt disappointed. The demonstration focused less upon the preparation of edible puzzles such as rabbit-polenta terrine with truffle mascarpone, black trumpet mushrooms and chervil, or herb crusted pork tenderloin with Yukon gold potatoes and bacon sherry vinaigrette than on Trotter's philosophy of gastronomy. Though he admittedly despises cooking demonstrations, he graciously agreed to appear at Central Market after Laura Bush personally asked him to participate in her pet project, the Texas Book Festival. Cooking demonstrations, he believes, are no real way to gain an understanding of cuisine, which is inherently improvisational, organic. Great cooking, like great art, requires a certain amount of innovation and creativity. It is not something that can be learned through a cooking demonstration or a cookbook, but through hands-on experience. Cooking demonstrations and cookbooks, he believes, should be followed less for knowledge than for inspiration.

More than a cooking demonstration, then, Trotter's class offered a unique opportunity for Q&A with one of America's most successful chefs. Intensely self-assured and pedagogic, he demanded that each member of the class ask at least one question. And for the most part, they rose to the challenge, making inquiries about everything from his favorite all-purpose olive oil -- it's Lucini -- to what his greatest culinary influences are (The Vegetarian Epicure, Fernand Point's, Ma Gastronomie). Trotter eloquently answered each question as he sautéed pork loin and rolled up terrine -- a consummate multitasker. His well-worded answers revealed a remarkably intellectual understanding of his art. The art of cookery, according to Trotter, is less about technical virtuosity or "perfection" than about continually striving to create something new. And though this may sound like experimentation, it is not. "I don't experiment," he claims. "I only put together foods that I know will work." It is perhaps this combination of confidence and "palate understanding" or "palate memory," as he calls it, that has made Trotter so successful in the restaurant business. It's not just what gives him his "unique culinary voice," it's also what causes others to listen.