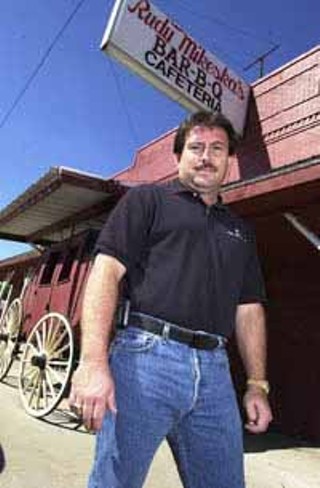 It isn't difficult to understand why the Mikeska clan has been dubbed Texas' First Family of Barbecue. This dynasty, spread over Central Texas and spanning three generations, was founded in the 1920s when John Mikeska, a Czech immigrant in Taylor, operated a "meat club" with his six sons. The family processed cattle, hogs, goats, sheep, and chickens for area farms, in exchange for an allotment of the meat.

By 1965, each brother had his own barbecue establishment: Rudy in Taylor, Mike in Smithville, Jerry in Columbus, Louis and Clem in Temple, and Maurice in El Campo. Their sister Val Mikeska Lindeman assisted Clem in Temple, and sister Ann Mikeska Jozwiak owned Taylor's Diamond Inn. Sister Martha Mikeska Vanacek raised Benny and Michael Vanacek, who currently own 26 McDonald's franchises and sit on the McDonald's board of directors.

While the brothers shared business ideas, cafeteria service, and décors of mounted game, each developed unique recipes and barbecue styles. Only Rudy prepared lamb ribs, and Clem serves sirloin instead of brisket. Some brothers used live oak; others preferred pecan. Each spiced his sausage differently. With their similar-but-different styles in their separate-but-proximate towns, they all maintained reputations for great barbecue and they've served celebrities from sitting presidents to rock stars.

Today, barbecue remains a Mikeska family affair. While Louis and Mike are deceased and their places in Temple and Smithville have closed, Jerry Mikeska, nearing 80, still runs his own Columbus operation. In El Campo, Laurice Mikeska Vacek, Nick Mikeska, and Gerry Mikeska work with Maurice in the Old Pit, the New Pit, the Lunchbox (in Maurice's original meat market), and the Freeway Location. In Temple, siblings Stephen Mikeska, Anna Mikeska-Payne, and Angela Mikeska Conlan assist Clem in the restaurant, catering, and mail-order business.

In Taylor, Rudy Jr. "Tim" Mikeska and Judy Mikeska Kaase follow in their late father's footsteps, and they've expanded the operation across the globe. Tim served barbecue to England's Prince Philip and in Bosnia; he recently appeared on the Food Network with Bobby Flay.

And the next Mikeska generation? Tim sums it up: "I tell my children what my father told me, 'If you like the business, it's there for you.' I think my uncles and cousins would say the same."