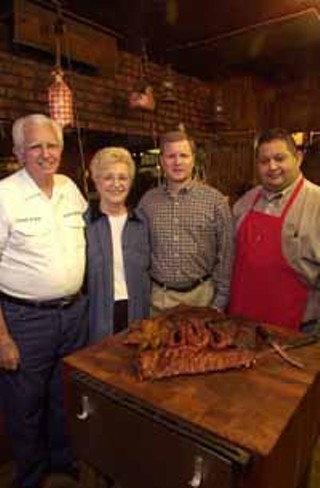 Black's Barbecue is the oldest continuously run barbecue restaurant in the state and ranks in everyone's top lists. During the Depression, in 1932, the Black family ran a subsistence farm in Delhi, 20 miles east of Lockhart. Their cattle-raising neighbor, a Mr. Rabel, had a meat market in Lockhart and asked them to run it for him. In those days, primitive refrigeration came from ice, and there was no use for the lesser cuts of meat unless they were cooked, so all trimmings were made into sausage (remember, this was before the days of hamburgers).

In 1934, they added a small line of groceries in a separate building, with a pass-through window so that ladies could order smoked meats without being in the same room with the beer-drinking men. In 1949, after son Edgar Jr. returned from college at A&M, he convinced Edgar Sr. to move the restaurant to an adjacent building, where it exists to this day. That move also prompted the construction of the current double-wall masonry pit, where the meats are slow-smoked over post oak. Black's was also the first area barbecue restaurant to use brisket, beginning the practice in the mid-Fifties. Previously the proper cut was shoulder clod, which had no market value otherwise.

In 1962 they enlarged to their present size by enclosing the alley that separated the buildings. Sauce at Black's was unheard of until the mid-Eighties, when Edgar Jr., or "Mr. Junior," had received so many requests from "northerners," as he refers to them, that he got his wife Norma to come up with a succulent sauce recipe. Today Black's features a full line of sides to accompany their brisket, sausage, chicken, ham, pork ribs, and loin.