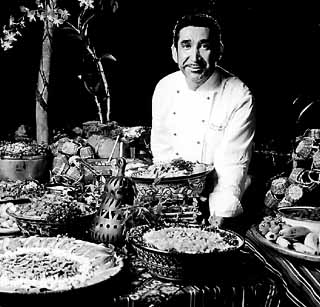 At the heart of the Austin Chronicle Hot Sauce Festival is the contest itself. The blind tasting competition for individuals and restaurants is conducted by some of the top chefs in the state of Texas. They take hot sauce seriously, and so do most of the people who enter. Several previous winners in the individual category have gone on to start their own hot sauce companies.

This year's final judges are:

Executive chef of Fonda San Miguel, Miguel Ravago had been recognized by the James Beard Foundation as one of the Southwest's top chefs. Miguel is the co-author of Comida de la Familia (with Marilyn Townsend), a cookbook that features authentic Mexican family-style cooking.

Chef and co-owner of the popular Vespaio restaurant on South Congress, Alan Lazarus has long been considered one of Austin's top toques. His previous Austin restaurants include Basil's and Tortugas. Lazarus also spent several years serving as the executive chef for Whole Foods.

Chef and co-owner of the Granite Cafe, Sam has worked as a chef, baker, or line cook in many of the top kitchens in Texas, including Biga in San Antonio, Cafe Annie and Oussie's Table in Houston, and Jeffrey's in Austin.

Kathrine is a chef at Biga, in San Antonio, which is consistently ranked among the top restaurants in the state. Kathrine was formerly employed at Star Canyon in Dallas by the founder of the New Texas Cuisine and former hot sauce contest judge Stephan Pyles.

Grady Spears was named one of the Top Five New Chefs of 1998 by Restaurants and Institutions Magazine. Spears, who once worked as a cowhand and cattle broker, is the co-author of A Cowboy in the Kitchen (with Robb Walsh). His new restaurant in Fort Worth will open this fall.

Preliminary judges open, sort, and screen every single bottle of hot sauce entered in the contest. Then they pass the best qualified entries on to the finals. As you might imagine, this task sometimes involves the unpleasant experience of being the first to eat a salsa that is too hot for human consumption. For their tireless efforts we wish to thank these veteran preliminary judges in advance: 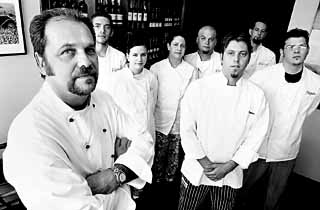 Alan Lazarus and his staff at Vespaio