At Starlite, It's Possible -- and Exciting -- to Belong to the Clean Plate Club 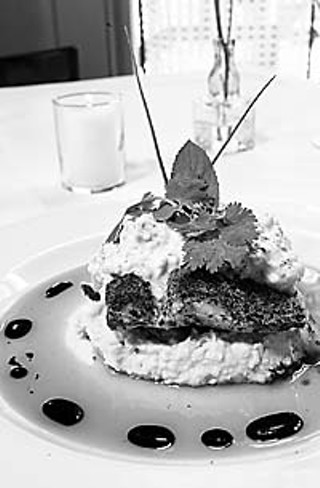 "You don't have to eat it all," I would desperately reassure my husband during our initial meals out after moving to Austin from Paris. "That isn't the American 'rule.' Really, don't force yourself." Accustomed to France's unspoken rule No. 1 when dining out -- "Eat everything on your plate or be prepared to justify your wasted portion" -- he would struggle to finish the heaping, multi-pound platters that our local restaurants proudly dish out for diners. Today my husband willfully leaves food on his plate, but now it's the sheer, senseless waste that bothers him. That's why his comment during a recent dinner out at Starlite, a new restaurant on 34th Street, struck me as particularly complimentary. "Finally," he sighed in satisfaction, "a restaurant where you can actually enjoy an appetizer and an entrée, and still look forward to dessert!"

Located a block off Guadalupe in the refurbished 1930s-vintage home that most recently housed the Rhythm House and before that Señor O'Brien's, Starlite is one of the latest entries in Austin's fine-dining scene. Small and intimate, with a hip, spare décor and ample patio space to go along with its of-the-moment cocktail menu, Starlite can be located by its large, glimmering star. No sign advertises "restaurant" or even "bar," which gives the place the feel of the great little neighborhood secret it has, in fact, become. The crowd tends toward a stylish, artsy cross-section of twenty- to fortysomethings, professionals and students alike. Owned by the trio who co-own Club DeVille, Starlite presents white-clothed tables and a menu with Asian and eclectic, Continental-cum-New American cuisine leanings. Chef Chris Howard reigns over the kitchen, bringing with him experience from celebrated kitchens in San Francisco and Santa Fe as well as Austin's Granite Cafe and Jeffrey's, where he worked as sous-chef for three years.

It may seem strange to begin a restaurant review with talk of how much you can expect to find on the plate, but portion size has become a pet subject of mine in recent months, and in my estimation, Starlite does right by its diners. At Starlite you can actually have four full courses -- soup, salad, entrée, and dessert -- for under $40 (tax and tip excluded). More importantly, you can actually fully experience four courses and walk comfortably away from the table, top button still shut and heart free of burn, dinner a very pleasant memory.

After hearing great-tasting, thoughtfully conceived, enthusiastically prepared food derided for being "too little, too nouvelle cuisine," or "too chi-chi" for the average Austin diner, I have to have my say. Don't get me wrong, I love the cheap eat dive as much as the next guy (assuming I'm ingesting quality in addition to quantity). What I don't love is the prevailing myth that more on the plate means more for your money. It doesn't.

Portion size has been a hot-button issue in professional food circles for the better part of two decades. Since the mid-Eighties, the national restaurant trend has been toward "value marketing," or offering consumers more food for less money. Portion sizes have consistently grown larger, and chefs insist that customers' expectations are the motivating factor behind the hefty plates that exit most kitchens.

Besides the fact that being a member of the "Clean Plate Club" could be a health hazard for today's diners (increasing obesity rates have led to a growing number of related chronic illnesses such as heart disease, diabetes, stroke, and certain cancers), there is the wider issue of waste to consider when a plate is left unfinished.

In a survey by International Community Research quoted by the American Institute for Cancer Research in December 2000, only 20% of American diners said that when eating out they finished their food all the time. In a nation where 12 million households (excluding the homeless) worry about getting enough to eat, the 96 billion pounds of food wasted each year at the food service and household level is downright scandalous! As far as I'm concerned, a restaurant that serves reasonable, appetite-satisfying portions at fair prices should be applauded. Places like Starlite, where the food is creative and challenging to the palate to boot, deserve a standing ovation.

Dinner at Starlite might begin with the playful Bibb lettuce, zucchini, and baby corn salad with red chile feta dressing ($8), an offering I eyed at a neighboring table. The salad resembles a nest, with celadon-green Bibb lettuce hearts encircled by long shavings of grilled, or perhaps marinated, squash topped with a confetti-like garnish of corn. Another option is the rich tomato soup laced with boursin cheese and cornbread croutons ($5), again something chosen by a neighboring diner and oohed and aahed over by his entire table. I chose the crabcakes ($10), two spectacular, silver-dollar-sized disks of lump crabmeat packed solely on the outside with breadcrumbs and served atop a tart, miniature matchstick salad of green mango and carrot. The best part of the plate, besides the unrivaled crabmeat/breadcrumb ratio, turned out to be the "lemongrass fondue" the crabcakes float in. More a light, frothy sauce than fondue, the tender scallion-like rounds of lemongrass add far more zing than a lemon or lime could, and I finished up the sauce on an errant fingertip.

My husband chose the Vietnamese Carpaccio ($8), transformed into an Asian platter by the addition of a fiery zigzag of Sriracha and a sprinkling of minced peanuts and black sesame seeds. A tiny herb salad in which cilantro plays the leading role adds a fresh, green touch to the mellow meat plate. A pinch of salt would have been to the carpaccio's added advantage, but overall, the plate pleased.

I selected the Crispy Sea Bass ($18) for dinner, a square fillet a little longer on each side than the length of my index finger. Cooked superbly, the fish possesses the unmistakable crunch the menu promises, with a wet and pliant interior. It comes topped with an ebony "Chinese vinaigrette," in which the rich, coffee-like flavor of black bean paste dominates. A tight, black-and-white sesame seed-crusted rice cake topped with dainty asparagus spears scented with garlic comes opposite the fish, rounding out the entrée with style.

Our second entrée was the lamb loin ($19). Topped with sweet, fat, grilled figs and encircled by a charcoal-colored balsamic reduction that rivaled the figs in its sweetness, the lamb exits the kitchen sliced and fanned expertly across a curious tart of sweet onion and Stilton cheese. Several leaves of a bitter green find themselves sandwiched between the meat and onion tart. The sweet figs and syrupy balsamic reduction work well against the full-flavored lamb and the slight bite of the bitter greens. Only the tart tastes out of place to me, the filling a tad too egg-y and the crust a bit too thick against the meat.

Desserts, by pastry chef Mercedes Reed, include Starlite's nearly famous Strawberry Rhubarb Fool ($5), served with panache in a skinny champagne flute. Ethereal and creamy, the desert is at once homey and luxurious. Even better is the apricot pound cake ($5), two moist cubes of apricot-riddled cake grounded by a poached apricot half, then dressed with a vanilla bean-flecked crème fraîche.

Brunch at Starlite isn't an early morning affair. Service begins at a very civilized 11am. To launch the meal, regulars insist on the restaurant's signature wasabi Bloody Mary ($6), a somewhat murkier version of the matinal classic. I'm a big fan of wasabi, and have drunk Bloody Marys since my days as a very young minor when my Dad would whip up post-church "Bloody Shames" for my sister and me, but I prefer my wasabi with sushi. Next time I'll stick to Starlite's standard bloody, although there's no convincing my friends that the original version is best.

On to matters of food. Each brunch entrée sampled was worthy of admiration. The prettiest plate -- and the most complex combination of flavors -- comes in the form of the Tokyo Breakfast ($10). In it, a precious puck of moist jasmine rice is crowned with a diminutive poached egg as soft and luxurious as sweet cream. Balancing on top of the mound are two tuna croquettes -- think crab cakes only with tuna instead, and the addition of loads of fresh ginger. All of this rises from a pale orange pool of Sriracha butter, an absolutely decadent and brilliantly simple concoction that I can't wait to imitate at home.

Mediterranean food lovers will appreciate Starlite's fritatta topped with a puckeringly herbal pesto ($9). Prepared as an individual egg pie in the manner of a small, one-person pizza, the fritatta harbors almost equal parts vegetables to egg, the reason for its lack of fluff, but something that is easily overlooked given its wealth of bright flavors.

For light eaters, Starlite does most brunch items a la carte. My girls contented themselves with a sunny yellow plate of scrambled eggs ($2), flecked with fresh chives, and an English muffin ($1), worth ordering if only in order to sample Starlite's incredible homemade raspberry jam -- tart, deep magenta in color, full of fruit bits, and super spreadable (as opposed to "squishable" like ordinary commercial jellies).

Obviously, I'm sold on Starlite. Chef Howard and his kitchen team are on to something. They consistently serve dishes with a complex layering of flavor -- meals that you can taste and puzzle over with little risk of losing interest or appetite in midstream. At Starlite, good things do come in smaller packages, and with appetizers in the $5 to $10 range and entrées coming in between $15 and $19, the restaurant just might be the city's least expensive fine dining establishment. A star, indeed.