What Is Star Canyon Without its Creator, Stephan Pyles? 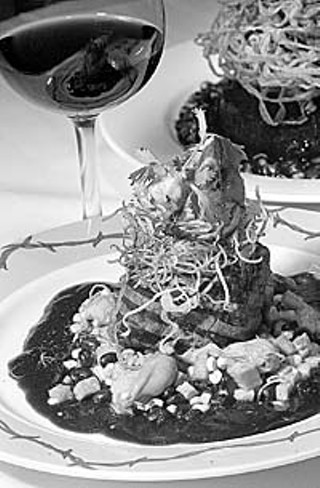 The hottest national restaurant industry trend of the Nineties was the development of upscale chains based on the restaurants of celebrity chefs/restaurateurs. These hip, trendy fine-dining outlets begin in places like New York, New Orleans, Santa Fe, and Dallas and are spun off to such tourist meccas such as Las Vegas, Washington, D.C., London, and Beverly Hills. Jean-George Vongerichten, Emeril Lagasse, Mark Miller, and Stephan Pyles are some of the better-known chefs to develop "name-brand" restaurants based on their celebrity and bankability. Big Spring native Pyles, a Texas chef known as one of the originators of Southwestern cuisine, built up a very loyal following at the Texas chic Star Canyon in Dallas. With solid corporate backing, he created a second successful Star Canyon and its spinoff, Taqueria Canyonita, in Las Vegas. In the late Nineties, rumors swirled around Austin that Pyles would cash in on the dot-com dollars and bring Star Canyon to the ground floor of the about-to-be-refurbished Stephen F. Austin Hotel. Though deals were always said to be imminent, ownership of the hotel changed hands at a crucial point, and by the time Intercontinental Hotels was ready to ink a deal with Star Canyon, chef Pyles had sold his interest in the company to his corporate partners. So we're left with the question, is Austin's Star Canyon outlet worthy of star billing without the guiding hand and engaging personality of its star chef? At this point, my response to that question is a definite maybe. Here's what I mean.

Austinites are notoriously skeptical of glitzy name-brand business deals, and with good reason. So the Star Canyon folks had their work cut out for them setting up shop on the capital city's main thoroughfare. Austin doesn't attract the volume of year-round tourist traffic to provide a famous name-brand restaurant with fresh clientele every day. Building a local following would be necessary to survive, especially now that the dot-com dollars have dried up. Star Canyon came to town early this spring with a friendly, low-key attitude and wisely avoided the serious faux pas made by the last name-brand restaurateurs to try the Austin market. No one made arrogant and inflammatory statements to the press, and that distinctly Dallas desire to educate Austin diners about the proper attire necessary for the enjoyment of a fine-dining experience stayed in Dallas, right where it belongs. 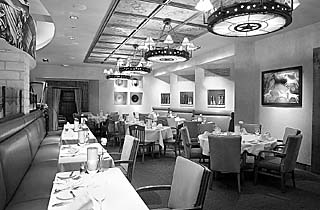 Austin's Star Canyon boasts a dynamite downtown location at the corner of Seventh and Congress, convenient to the Capitol, the Paramount and State theatres, office buildings, and within walking distance of both Sixth Street and the Warehouse district. The hotel's valet service solves the persistent downtown parking problem and the street-level windows in the bar and dining rooms create the impression that diners are part of big-city action, day or night. The decor is pure Texana, more cowboy chic than kitsch, with each dining room sporting a different design representing the Lone Star state. Tables are spaced so as to make private conversation possible, and the chairs are especially comfortable. So far, everything looks great.

On my first visit to Star Canyon, a friend and I dropped in for lunch and found the entire experience completely unremarkable. I'm a longtime fan of the original restaurant in Dallas, and while I considered it unfair to demand this outlet be exactly the same, especially once chef Pyles had departed, I was expecting a lot more than unremarkable. The service was perfunctory and uninformed. The food wasn't bad, it just wasn't anything special; overcooked shrimp in the shrimp cocktail, limp salad greens, a chicken-fried piece of veal that was tough as a boot. Only pastry chef Andrew Gonzales' desserts truly impressed me (the warm pineapple upside-down cake is divine) but dessert sales alone won't support a restaurant this size. Unremarkable meals just aren't going to cut it for an outfit with such a high profile and high overhead. Unfortunately, the buzz around town quickly became that the new Star Canyon wasn't worth the price, and crowds stayed away in droves.

To their credit, the owners realized the necessity for some fine tuning, and on more recent visits, things at Star Canyon seem to be on the upswing. Former Austin chef Ron Brannon was troubleshooting at the Taqueria Canyonita outlets in Plano and Las Vegas when he got the call to take over the operation of Star Canyon's Austin kitchen. He's only been back in Austin a couple of weeks, but changes are already evident. The waitstaff is better informed and more enthusiastic. Looking at the plates emerging from the kitchen, it's obvious there is much more attention to detail. Working side by side with his troops, chef Brannon seems to be providing the structure and guidance the Star Canyon kitchen was lacking.

We dropped in for Sunday brunch recently and were pleasantly surprised to find the a la carte menu both inviting and well-priced. With some upscale brunch prices around town topping out at $30-$40 per person before tips and parking charges, I'm surprised more folks haven't discovered Star Canyon. We three stuffed ourselves for about $25 each and were able to park on the street on Sunday. The meal starts with a complimentary pastry plate loaded with warm, raisin-studded cinnamon rolls, dainty, fine-textured muffins, and a mouth-watering crumb cake. The pastries were delightful and well-prepared, but don't fill up on them. The menu offers egg dishes, salads, and substantial entrées, all in the $8-$25 range. For an appetizer, we shared an order of crab & shrimp cakes ($12), large golden mounds of toothsome shellfish complemented by a tangy aioli. I chose the Star Canyon Eggs Benedict ($16), a variation on the classic that features medallions of beef tenderloin on homemade biscuits topped with perfectly poached eggs and a zippy hollandaise. Spears of roasted asparagus made a nice addition to the plate, but the potato cubes for the home fries were cut so small they were leathery and dried out, a minor quibble. Equally delicious was the large seafood omelet ($13), tender to the fork and full to bursting with crab and shrimp. The Original Southwestern Chicken Caesar ($9) was garnished with the restaurant's signature star-shaped jalapeño polenta croutons and was a perfectly reliable rendition of the now-ubiquitous menu staple. Brunch here is definitely worth a shot.

A dinner visit last week indicates to me that Star Canyon is finally headed in the right direction and is the basis for my qualified recommendation of the restaurant. The bar was doing a brisk, boisterous business for a Tuesday night, but there was no wait for a table in the dining room. We were seated in a room decorated with colorful boots and cowboy hats, with a good view of the working line in the kitchen. Dinner started with complimentary warm blue cornbread stars, spicy with the kick of cayenne. I decided to sample some of the restaurant's better-known dishes to see how they were faring in chef Brannon's hands. The news is good. The Tamale Tart ($12), a red chile masa tart shell filled with mellow roasted garlic custard, is topped with spicy tenderloin chili and every bit as good as the ones I'd loved at the original Star Canyon. The Fried Green Tomato Salad ($8) with marinated mozzarella from Dallas' Mozzarella Company, was good but still needs a little tweaking since the lacy cornmeal batter wasn't adhering to the thick tomato slices. (If fried green tomatoes can be done well at Threadgill's, they can be done well here, too, we're sure). The crowning dish of the meal, however, was the Bone-In Cowboy Ribeye ($28), a definitive Star Canyon signature dish if ever there was one. While I'm decidedly not from the branch of my family that's been known to eat from the chuckwagon, I enjoy a good campfire meal as much as the next native Texan, that's for sure. The large, perfectly medium-rare steak arrives on a thick bed of smoky pinto bean, wild mushroom, and corn ragout, topped with a tangled pile of red chile onions as tall as the crown of my granddad's Stetson. It's a dazzling Texas meal, the rich, hearty ragout kissed with the aroma of wood smoke, tender, juicy beef and the impossibly thin, crisp onions, adding the zip of red chile. We topped dinner off with the decadent Warm Chocolate Pudding Cake ($7) and a few scoops of puckery-tart Margarita Sorbet ($6) and went home full, happy cowpokes.

Stephan Pyles built Star Canyon's reputation -- and his own -- on distinctive, imaginative Southwestern cuisine. In order for the local outlet to attain the same star billing as the original, chef Brannon and his staff must continue to prepare dazzling, right-on renditions of the established favorites as well as come up with some Austintatious specials to give this Star Canyon a unique personality that will entice River City locals. I'm encouraged, I'm optimistic, and I'll be going back to see for myself if they pull it off.