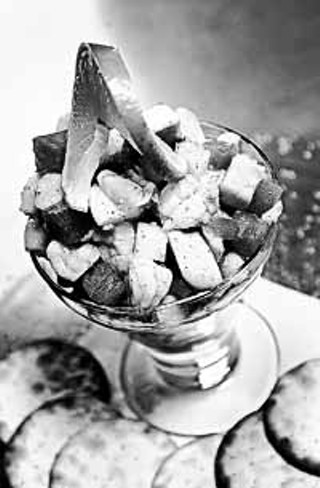 Raw fish makes an impression. As many memorable meals as I've eaten since, I still recall my first bite of sushi. It was taken, strangely enough, at a table in Paris, inside the hushed, suit-filled dining room of a Japanese restaurant in the swank 7th arrondissement, a place far too expensive for me at the time, but one that felt so wonderfully adventurous. After months of ingesting the rich new flavors of complicated French dishes, the bite-sized bits of raw fish tasted so pure, so clean, so exotic -- even daring.

Had I thought about it a little, I would have realized that this sushi experience wasn't my first dance with raw fish. Texas was part of my identity, and "raw" fish in the form of ceviche was something I'd slurped down many times while swilling margaritas at Mexican restaurants back home. Granted, technically speaking, the fish in ceviche is not raw since it chemically "cooks" in lime juice. Yet like the fresh fish rolled up in its Japanese counterpart, the cubes of cold, fresh seafood that star in ceviche never touch heat.

Ceviche's origin is somewhat disputed -- either the invention of the pre-Columbians who, food historians tell us, ate their raw fish laced with dried chiles, salt, and foraged herbs; or perhaps more precisely, ceviche as we know it was the creation of Moorish cooks, who were brought to South America as Spanish slaves, and who, it is believed, were responsible for the addition of citrus juice to the earlier cooks' traditional salt/spice/herb mix.

Chronicle food writer Mary Margaret Pack, an avid student of Pacific cuisine, tells me that ceviche has a long history on tables in the South Pacific as well, with Fiji, Tahiti, Hawaii, and the Philippines each possessing its own uniquely named version of the dish. Fiji's take on ceviche sounds particularly delectable to me, with its coconut milk, onion, tomato, and hot chile base.

Regardless of the dish's birthright, ceviche certainly began its trek northward into Texas from the Pacific coasts of Peru and Ecuador. Ceviche is Peru's national dish, typically made with a fish called "corbina," or corvino, that is cured in the juice of a small, sweet lemon that is a relative of our key lime. The fiery aji amarillo pepper usually finds its way into the Peruvian recipe, and contemporary takes on ceviche in Lima might include corn and/or diced sweet potatoes. Peruvians revere ceviche as a powerful antidote to the headache brought on by an excess of Pisco. In fact, in my research I discovered that ceviche's soupy broth, known in Peru as "tiger's milk," should be lovingly transferred to a highball glass, then drunk over a little vodka or Pisco for maximum hangover-combating results. Nothing like fighting fire with fire (and throwing in some cold fish for good measure!).

In Ecuador, ceviche generally refers to a bowl of shrimp "cooked" in the juice extracted from bitter Seville oranges. Popcorn and toasted corn nuts take the place of the cilantro and onion garnish we're accustomed to seeing around here.

Traveling northward into Mexico, ceviche becomes a lime-marinated jumble of fish and shrimp tossed together with tomato, onions, avocado, and jalapeños or serranos, often spiced up further with chili powder, garlic, and cilantro. In Mexico it seems, there are a multitude of ceviche-style delicacies, from ketchupy "cockteles" to the more salad-like, citrusy salpicons of shrimp or fish. Ultimately, what makes ceviche the real McCoy is its uncooked, or more accurately citrus-cured, fish and seafood.

In Austin, ceviche has long been a mainstay of family-run Mexican restaurants -- places such as Mariscos, Polvo's, and Curra's -- but in recent months, a veritable ceviche explosion has made the dish a regular on the menu of many of our city's higher-brow establishments. As might be expected, Austin chefs are taking creative liberties with this ancient dish, many times with great success.

At the recent Umlauf Sculpture Garden and Museum's Garden Party, three of Austin's leading restaurants, the Granite Cafe, Mars, and Saba Blue Water Cafe dished up ceviche. Chef Charles Mayes of Cafe Josie had a version up his sleeve for the event as well, but opted to save his interpretation of the dish as a tropical-inspired side dish for diners who stop by his popular Clarksville spot for summer dining.

Mars chef/co-owner John Bullington prepared his "Thai-style" take on the dish, a creation he also offers as an occasional summer appetizer special in the $8 range. While Bullington is quick to admit that he's never seen a recipe for a Southeast Asian "ceviche," he has extrapolated the flavors of Thai cooking to this South and Central American favorite with great success. In Bullington's ceviche, bay scallops, corvino, mahi mahi, and shrimp commingle with keffir lime-infused coconut milk, lime juice, Thai chiles, and fresh basil. Lotus root chips take the place of corn chips or Saltines when it comes to sopping up Bullington's lively marinade.

My first taste of this "new ceviche" came at the Granite Cafe early last fall. There, chef/owner Sam Dickey submerges large (16-20 count per pound) shrimp in lime juice for 10 to 15 hours then sweetens the blend with chunks of ruby red watermelon and tiny bits of red onion before spooning it ever-so-dashingly into a martini glass. The ceviche-martini's twist comes in the form of crisp tortilla strips dusted with the Granite's housemade nine-chile powder, coriander, comino, and canela. Dickey credits a friend from San Antonio as his inspiration for the ceviche ($7.50), which is a spinoff of his friend's refreshing summer salad of watermelon, red onion, salt, and red wine vinegar.

For home cooks, ceviche can be an easy, make-ahead summer supper that offers almost endless possibilities for change. The key to a good ceviche, of course, is top-quality fish and seafood. Buy sushi-grade fish whenever possible, and for extra security, allow the fish to cure in lime juice or other citrus juice at least 8 hours or overnight before serving. Add your other chilled, chopped ingredients -- tomato, onion, avocado, jicama, watermelon, cilantro -- just prior to serving for best results. The following is my latest personal take on ceviche, inspired by the heady flavors of traditional Moroccan charmoula, a sauce typically used to accompany grilled fish.

Salt and white pepper to taste

Chop fish into small cubes (approximately 1/4 inch). Place in a non-reactive bowl or large Ziploc bag and cover with lemon juice. Add cumin, paprika, cayenne, salt, and pepper. Mix well and marinate in refrigerator for at least 8 hours prior to serving.

Grind cilantro, parsley, and mint leaves in a mortar with a pinch of coarse sea salt and a clove of garlic. Transfer to a small bowl and slowly whisk in olive oil and lemon juice, alternately, until well blended. Set aside.