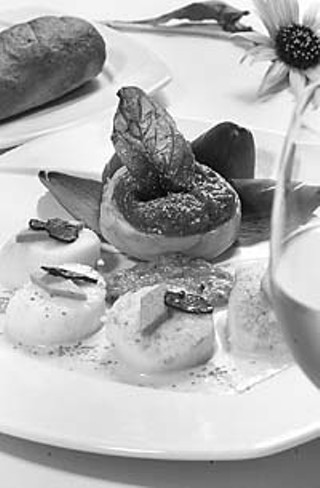 The aesthetics of the meal say a lot about who we are as a people. During the Middle Ages in Europe, for instance, bigger was better, and the most prominent characteristic of most feasts was their outrageous size. Whole roasted pigs stuffed with a turkey, stuffed with a goose, stuffed with a pheasant, stuffed with a quail would appear on the dining boards of ambitious gourmands. Giant still-life arrangements of wild animals set amidst a garden of fruits and vegetables beguiled the medieval elite. In an age when the very scarcity of food formed a major preoccupation for the average person, these spectacular feasts served as mocking reminders of the sharply drawn line between the haves and the have-nots. In our own age, our relationship to food is quite different. In America we live with a surplus, and the foods we consume need not be big to impress. Our own mealtime tastes tend to express the nationwide mania for raw spectacle. Put simply, we want our food to entertain us.

The aesthetic at Girasole speaks to the food fashion of our age. It is studied, indeed, almost market-researched in its appropriateness. Plates that arrive from the kitchen like miniature sculptures, a dining room featuring dark, stained wood and exposed brick, a climate-controlled cigar room on one side of the restaurant and another climate-controlled wine cellar on the other side, white tablecloths, appropriately deferential waiters, and a French wine steward all commingle in this highly designed space. With the smooth sounds of the live piano jazz emanating from the bar, it ambitiously challenges its customers not to feel that they have somehow landed in another world.

Indeed, Girasole -- the Italian word for sunflower -- evokes the bright fields and undulating hills of the Italian countryside. But don't let the name mislead you; the fare at Girasole is less Italian than Italian-inspired. Chef Christian Echterbille, most recently of The Belgian Restaurant, derives his culinary inspiration from all over the European continent. And while the menu at Girasole does feature a strong Italian presence, it is also heavily weighted with the types of flavor pairings that have come to characterize modern cuisine throughout Europe and the United States. Perhaps the most defining aspect of Echterbille's cuisine is his very obvious predilection for luxury foodstuffs. Foie gras, truffles, gravlax, wild mushrooms, and rich fruit tones highlight a menu that reads more like a Zabar's inventory than a list of meals. Extensive and intimidating, the menu at Girasole is not the kind to skim through quickly. In fact, I heartily advise you go to Girasole prepared to devote at least a half hour to concentrated perusal of the carte. And once you think you've got a handle on the menu, there's the even more voluminous wine list to contend with all over again.

Consider carefully, and choose wisely, because at a $60 average per-person price tag (with wine), a meal at Girasole is not one that most people are likely to often repeat. My advice for all those contemplating a visit to Girasole would be to steer clear of the more pedestrian items such as the prosciutto with melon and buffalo mozzarella ($8), or their pastas with tomato sauce ($8-$10, appetizer portions; $15-$20 as entrée). It's not that these aren't properly prepared -- they are. However, they lack the wow that Girasole seems to be aiming for with its heavily concept-oriented atmosphere. Instead, begin the meal with Girasole's tender, velvety, seared foie gras finished with brandy and caramelized roasted figs ($18). Not for the squeamish, the liver is rare. The result is that each bite melts in the palate like a savory pat of butter -- a very definite wow.

If you are into spectacle, you will love the creations that emerge from Girasole's kitchen. Composed, elegant, each plate exhibits that purposeful marriage of color and form that so characterizes the culinary aesthetic of our age. A glistening eggplant, roasted pepper, and goat cheese terrine ($9) towers above its plate, guarded by a dainty moat of tomato infusion. Shining red, yellow, and green, its cool texture and fresh flavor make it the embodiment of summer. On last season's menu, quail perched on yellow pumpkin flan, capped with a fanned, green apple crest, screamed for attention. These plates are more than mere nourishment -- they are edible art.

Less vertical, but no less aesthetically pleasing, is the aged beef carpaccio appetizer capped with a delicious round of roast foie gras, garnished with a puff of shredded greens ($10). Heavily marbled and touchingly tender, the cool rounds of raw beef don't really require the pressed foie gras to give it extra flavor. But for the consummate gourmand who is always craving that extra level of gustatory complexity, this dish delivers.

Entrées at Girasole are equally showy. The roasted truffle-flavored veal chop in asparagus sauce ($29) stood up on its plate like a little soldier. A fan of truffle-scented potatoes and a colorful array of baby vegetables supported by yellow purée of root veggies finished the plate in festive regalia. Almost peaty in taste, truffle oil gives this lovely spring arrangement a deep, earthy aroma. A John Dory filet ($26) floating above a pool of dark cherry sauce also makes a bold statement. Wrapped in a fragrant herb crust, the fish was perfectly cooked. However, I felt that the strong, almost syrupy flavor of the cherry sauce outmuscled the fish. In contrast, the subtle grape must sauce accompanying Girasole's excellent elk chop (featured on the four-course $50 tasting menu) lends just the right amount of complexity to the light, gamey tinge of the elk. I was impressed that the chop was so tender, especially given that the practically zero fat content of elk can make it chewy and hard to eat.

Desserts at Girasole are prepared courtesy of sous chef Daniel Nemec and include predictable favorites such as soufflés, creme brulée, and a few surprises as well. Girasole's tiramisu ($10), for instance, is an eye-opening affair that defies expectations. Conveyed by an extravagant chocolate gondola, this dessert takes you on a journey through flavors. Raspberry mousse encircles the dark chocolate boat bearing a dainty confection of marscapone cheese and rum-soaked sponge cake. A merengue paddle and a sugarcane pole help complete the odyssey. I found the dessert too baroque for my taste; however, one of my companions found it delightful. A genuinely inspired treat is their lavender ice cream, which evokes perfume-scented fields in summer. And although it may seem a bit understated after Girasole's parade of culinary rarities, I strongly recommend their chocolate soufflé ($10). Delicate and airy, a good soufflé is one of those rare desserts that seem lighter than they really are, a final treat to an otherwise sated palate. On the other hand, the coffee-flavored creme brulée ($10) was a disappointment. It lacked coffee flavor and was a bit overcooked.

Girasole is the latest brainchild of Austin restaurateur Al Zare, who owned and operated Mama Mia's (now closed) and currently owns Piccolo Cafe. Cleverly packaged, this theatrical establishment has set itself up to be one of Austin's best dining establishments. And while I am favorably impressed by a cuisine that is generally well prepared and occasionally even inspired, I am slightly troubled by a consistent lack of communication between the kitchen and the front of the house. Both times I visited Girasole, the kitchen sent out plates that only passably resembled their description on the menu. For instance, the strip bass ($28) that was described on the menu somehow managed to magically transform itself into a Chilean sea bass (which is really not a bass at all) on its migration to our table. And the white bean purée that it was supposed to rest atop must have missed the processor before hitting the plate, because the beans were in fact whole, and, frankly, a little dry. A similar sort of oversight involving a missing mushroom timbale accompaniment clouded another visit. If the menu goes to the trouble of describing every item contained in each plate, then what comes out of the kitchen should conform to it; and if it doesn't, then waiters must be informed, so that they can notify customers before they make their selections. Another easy solution to this nagging problem might be to print new menus each day, once the kitchen decides what it plans to prepare.

Apart from these problems, Zare and Echterbille have put together a restaurant with all the right elements for success. On both visits, the service was flawless. Girasole's waitstaff and sommelier seemed genuinely eager to ensure our happiness with the meal. Like so many of Austin's new upscale restaurants, though, it promises big things, and because of that, some may find it hard to overlook imperfections. With time, however, Girasole may just blossom into the famous flower the name promises.