by Virginia B. Wood & the Cuisines staff 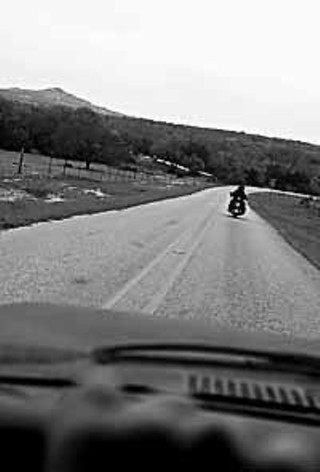 There's no doubt about it, the Hill Country as we've known it is changing. Not as rapidly as Austin, perhaps, but fast enough so that changes are clearly visible every six months or so. On our most recent sojourn around the area to update the annual Chronicle Hill Country Food & Wine Guide, we made a conscious decision to stick to the back roads as much as possible for a variety of reasons. Traveling winding two-lane back roads forces you to travel at a slower pace, giving you a little more time to enjoy the view, take in the sights, appreciate the landmarks, and observe the new additions. Turning off Hwy. 290 W. at Henly, we headed for Blanco along Hwy. 165, the gently undulating country road beloved by area cyclists that's lined with acres of fenced pasture. Regular fences usually hold cattle, horses, sheep, or goats. Behind taller fences, you're likely to see siku or axis deer, nilgai antelope, curly horned ibex, llamas, or the occasional emu.

Observing ranch gates is a great Texas back country pastime perfectly suited for a trip like this. They'll range from the elaborate and ornate to the whimsical to the subtle and understated, just like the ranch houses beyond them. Along 165 in the center of some tall fences, we spied the gate at Rancho Quatro Hermanas and spent the rest of the afternoon wondering just who the four sisters might be and what they did with the little boutique herd of exotic deer behind the tall green fences. We stopped in Blanco long enough to sample sandwiches at Real Foods Deli and a slice of pie at the Deutsch Apple and then took off down 281 S. Before long, we were headed west on 473, through Kendalia, past the Two Sisters, Sisterdale, and the Sister Creek Winery housed in the quaint old cotton gin.

After a refreshing stop for a glass of wine, it was off down the road again. At the intersection of 473 and Old Hwy. #9, also known as the Old San Antonio Highway, a sign pointed to something called the Old Tunnel Wildlife Preserve. Curiosity got the best of us and we were soon headed north, winding along over glistening little creeks, passing carefully stacked stone fences, an elegant horse farm on one side of the road, a humble trailer farther along on the other. Eventually we came to the Old Tunnel preserve, a former railroad tunnel cut through a limestone hill for the once busy railway line between Fredericksburg and San Antonio. The railroad used the tunnel until the early 1940s but for many years now, it's been the spring and summer home of another visiting colony of Mexican freetail bats. The bats fly out on their mosquito munching forays at sunset, just like their compatriots under the Congress Avenue bridge. A few miles past the Tunnel preserve, a historic 19th-century German homestead sits, all stone buildings with clapboard shutters, a solid reminder of Hill Country frontier life. The scenic old road hits 290 W. just outside Fredericksburg, getting us there in time for dinner at the Navajo Grill. Returning to Austin late that evening along 290 W., we were comforted by the sight of the friendly neon cowboy glowing above the newly reopened Nutty Brown Cafe. Like generations of traveling Austinites before us, the cowboy served as a sign that we were almost home.

After several years of traveling the Hill Country for the best in restaurants, cafes, roadside accommodations, and wineries, this year we're publishing the Chronicle Hill Country Food & Wine Guide in its entirety (entries are written by me unless otherwise indicated). April is the best time to visit the Hill Country. The annual Hill Country Wine & Wildflowers Trail is scheduled for next weekend, April 21-22 (www.texaswinetrail.com). The weather is still mild, all the rain has made the countryside green and verdant, the creeks and rivers are sparkling, and brilliant stands of wildflowers blanket the roadsides. We suggest you take a leisurely drive down the back roads, spin a few yarns about who might live behind the ranch gates, and then stop at some of the following places for a night's rest, a bite to eat, and a glass of Texas wine.