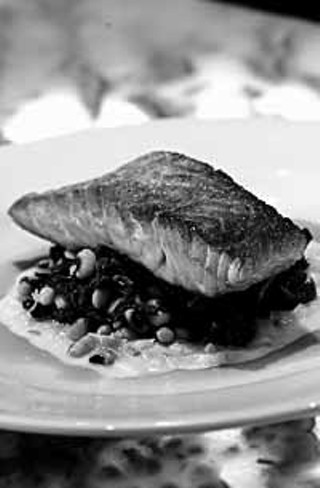 I find it strangely reassuring that one of Austin's leading restaurants, a "modern American bistro" of national acclaim, fills a modest 1920s bungalow on a lazy residential side street west of downtown, comfortably out of reach of our city's increasing glitz and glamour. For years, Zoot has held its own in Austin's restaurant scene, never succumbing to gimmicks or glitter to draw its customer base. Although the restaurant's kitchen guard has changed frequently, particularly over the past few years, owners Bick and Erika Brown (who also count Hyde Park Grill and Dolce Vita among their restaurant possessions) have kept Zoot's menu and its atmosphere anchored in understated refinement.

This unpretentious yet confident approach to fine dining clearly has broad appeal. On any given evening, Zoot's cozy, warmly lit dining room fills with a cross-section of the city. Seated around the white-clothed tables you find young and old, dates and small groups, black-clad hipsters and the obvious "out of towners," all nodding in approval as they spear forkfuls of sautéed veal sweetbreads, roasted chicken, or seared duck. It is precisely Zoot's unique ability to present culinary creativity in an intelligent, mature setting that consistently lands the restaurant at the top of heap in critics' eyes.

One of Zoot's most recent lauds arrived in the October 2000 restaurant issue of Gourmet. In it, chef John Maxwell's cuisine was characterized as "Austin's most exciting food," and Zoot ranked as Texas' sixth-best restaurant, ahead of Dallas' Mansion on Turtle Creek, and Austin's high-profile Jeffrey's. As the Gourmet critics so succinctly put it, "... it's the sophisticated play of textures -- like melting oysters crisped in airy chickpea-flour batter with a pickly daikon slaw -- that makes [Maxwell's] very American bistro plates memorable."

When the Chronicle visited Zoot a couple of years ago -- just several months into chef Maxwell's tenure at the restaurant -- we found much to celebrate about the direction the CIA-trained chef was taking the menu. We still find reason for celebration in Maxwell's interesting interpretations of American bistro classics.

Take the Pan Roasted Pork Chop With a Sauté of Caramelized Napa Cabbage, Root Vegetables, and a Whole Grain Mustard Sauce ($19.95). The dish is comfort food at its best -- not some nostalgic mass of mashers crowned with overcooked meat, but an interesting use of homey ingredients such as cabbage and turnips ennobled by a mammoth, just-pink, bone-in pork chop thick enough to suit a Medieval king. The whole grain mustard sauce offers the notable texture the Gourmet critics talked about -- providing little beads of flavor that punctuated every bite. The preparation itself is simple, really, but the fact that Maxwell caramelizes his cabbage and rough-cuts his root vegetables sets the dish apart.

Zoot's Salad of Crayfish and French Green Beans With Exotic Mushrooms in a Dijon-Tarragon Vinaigrette and Lobster Oil ($9.95) more easily exemplifies Maxwell's creative melding of textures. One of the menu's strong points, the salad strikes first as a feast for the eyes -- the brilliant, red-striped crayfish tails are a vibrant contrast to the spring green of the haricots verts and the putty gray of the tiny enoki mushroom bouquets that accent the plate. The blending of textures hits next, each mouthful an intermingling of crisp green bean fiber, pliant crayfish, and ticklingly fresh fungi wrapped in a luxuriant vinaigrette that goes down with a surprisingly bright kick of flavor.

Another salad of sorts, the now-famous plate of Chick Pea Crusted Gulf Oysters With Saffron Aioli and Pickled Cucumber/Daikon Radish Salad ($9.95), works textural magic as well. The oysters are just cooked -- warm and wet in the mouth alongside the tight crunch of their chickpea coating. The pickled slaw that takes the center of the plate is a tart, cold tangle, best, in my opinion, sampled apart from the oysters. Finally, the saffron aioli is the real McCoy -- a garlic-riddled homemade mayonnaise painted generously with evident threads of orange saffron.

Back to main dishes, Zoot occasionally departs, with success, from its "American bistro" genre, tackling the Asian-inspired preparations American diners have come to expect on fine-dining menus. There is an Orange Sesame Marinated Beef Satay With Fermented Black Bean Sauce ($7.95) on the appetizer menu, and an entrée of Rice Noodles With Seared Jumbo Sea Scallops, Ginger/ Lemongrass Broth, Baby Bok Choy and Garlic Confit ($23.95) as well. I didn't sample the satay, opting instead for the Grilled Herb Marinated Chicken Livers With Balsamic Onions and Red Wine Lentils ($7.50), a frankly overwhelming skewer of soft livers offset by sweet, caramelized onions and earthy lentils. I chose the dish for its novelty. (When do you ever see chicken livers on a fine dining menu?) But, if the Rice Noodle/Scallop preparation is at all indicative of Maxwell's hand with Asian-style preparations, I'm sure I'd have been happier with the satay.

As for the rice noodles and scallops, they exited the kitchen in a shallow bowl, wading in an aromatic, ginger-scented broth peppered with little bits of somewhat pungent garlic. The dense white sea scallops form delicate white islands that are buoyed by small clusters of wilted bok choy. The scallops were perfectly cooked -- just translucent, and meltingly delicious in the mouth. Again, Maxwell's flavors are straightforward and uncomplicated, and the chef has the confidence to let them stand on their own.

Also among the fish/seafood selections on the menu is a Wood Grilled Atlantic Salmon With Celery Root, Potato Galette, Sherry Scented Frisée, Apple/Leek Compote and Sage Oil ($23.95). Although far more complicated in terms of its layering of flavors, this dish also tastes clean and unadulterated. In it, Maxwell returns to his signature "bistro style" cooking, creating a plate that comes across as at once homey and modern in its appeal. A friend visiting from Scotland, ironically, was the one to order the dish, and she praised Maxwell's measured hand with the salmon and the wood. The celeriac/potato galette added to the plate's bistro styling, the celery root giving the potato cake an uncommon kick. The apple/leek compote and sage oil both serve as condiments to the fish, though the sage oil is perhaps a tad bit too strong a presence on the plate. Only the frisée needed revising -- nothing a few extra minutes in the sauté pan couldn't fix.

One special sampled at Zoot deserves mention: a thick, rich, creamed mushroom soup topped with a tiny mound of duck confit. It's divine, with more mushroom flavor than any mushroom soup I've tasted. Even better, diminutive morel mushroom caps are part of the garnish. And while I never seem to save room for dessert, the orange crème brûlée I did get a taste of was out of this world -- a thick, uniform cream that left us wanting for more.

Regulars at Zoot know that the restaurant's menu follows a seasonal cycle, with specials offered nightly. With the warm weather now upon us, chef Maxwell is likely in the process of producing a new spring/summer menu, one that showcases the ingredients of the season in modern takes on bistro classics. What's certain is that diners at Zoot will find these seasonal ingredients -- many of them reassuringly familiar from use in our own kitchens -- prepared in intelligent ways, ways that illustrate that ingenuity in the kitchen doesn't have to be bold or trendy.