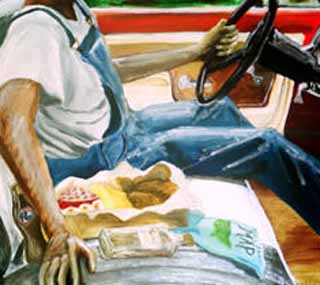 Last October, when I signed on to attend the Southern Foodways Symposium in Oxford, Miss., an annual gathering of Southern food enthusiasts -- writers, historians, chefs, and passionate amateurs -- I really didn't know what to expect. All I knew about Oxford was that it was the home of William Faulkner and Ole Miss. About all I knew about Southern food was what I had learned from my family while growing up in Houston. As for food writers and historians ... well, I read a lot of food books.

I have to confess that, as much as I've been interested in the food and cooking of various parts of the world, I just never paid much attention to the food of the American South. After all, it was just what I grew up eating. Not interesting. If familiarity doesn't necessarily breed contempt, it certainly can breed indifference. Sort of like what Jessica Harris (professor of English at NYU and author of numerous books about African and African-American cooking) said about soul food: "Before the Sixties, we just called it dinner."

It's only been in the last year or so that it has dawned on me that my longstanding interest in the subject that I privately called "food anthropology" was a widespread and growing area of serious study -- that of the role of food in culture. So when I heard about the Symposium, I had to stop and digest the fact that there was a body of people -- academics and others -- who took Southern food seriously enough to get together every year to exchange ideas, present papers, talk and argue, and above all, eat together. Well. Time for me to take a break from Mediterranean, Mexican, and Pacific cuisines and get back to my roots. Maybe I'd been missing something.

I arrived in Oxford on a gorgeous, warm October day. About an hour's drive south from the Memphis airport, I found a classic movie-set Southern town that time forgot, at first appearance, anyway. The quiet residential streets are lined by graceful, elderly, pastel-painted houses wearing wide wraparound porches and surrounded by huge shade trees, green lawns, and lush vegetation. The town has two centers: One is a classic, virtually unspoiled courthouse square that reminded me of nothing so much as the setting of To Kill a Mockingbird. The other is the equally classic, antebellum University of Mississippi "Ole Miss" campus, where the Symposium was held in the Barnard Observatory, a white-columned octagonal structure built by the university's first president in the 1860s.

The three days of the conference, titled, this year, "Travelin' On: Southern Food En Route," focused on an examination of what happens when Southerners and their foods travel north, and west, and across the Atlantic. Monique Wells, a Houston native who's lived in France for many years, talked about soul food in Paris and her book on the subject, Food for the Soul, that was first published in French. John Floyd, editor of Southern Living magazine, revealed that he publishes more than 800 regional recipes a year and more than half of the subscribers don't live in the South. John Lee, regular contributor to The New York Times food section, talked about his booming import business out of Charleston (shipping Southern foods and ingredients to New York and other foreign countries). Apparently, transplanted Southerners are willing to pay anything to get their hands on the foods so close to their hearts (like boiled peanuts). Lee also spoke of the cachet Southern food has developed in New York, where gourmet shops stock exotic foodstuffs like grits and soft, low-protein White Lily flour, so necessary for fluffy biscuits.

Yet throughout the series of erudite and provocative presentations on topics concerning Southern food when it leaves the South, the controversies raged (as apparently they have for three years running) about what exactly Southern food is, where it came from, and how it developed, and how it is different from other food in other parts of the country.

As Leah Chase, owner of Dooky Chase Restaurant and New Orleans cultural mover and shaker, said, "I like this organization because we talk about everything. We talk about race, we talk about culture. We aren't afraid to talk." That sure is the truth. I had no idea that Southern food was such a political subject. But as the days passed, the main thing I learned was that I have a lot to learn.

I arrived with the notion that everybody knew what Southern food was -- grits, biscuits, blackeyed peas, fried chicken, greens, barbecue, cornbread. However, Richard Pillsbury, a cultural geographer at Georgia State University and author of No Foreign Food: The American Diet in Time and Place, explained very convincingly that there is no single food that is characteristic of the whole region. The South is composed of several sub-areas, each with quite distinctive cuisines and eating habits -- a patchwork of cultures reflecting diverse influences from Native Americans to French Huguenots, from African slaves via the Caribbean to lowland Scots via Ireland. I learned about the Grits Line that runs more or less horizontally from Virginia to Texas (below it, Southerners eat grits; above it, they don't). Biscuits are not common everywhere, cornbread styles vary wildly, and there are at least three distinct barbecue-sauce cultures.

Don't get me wrong, we didn't just discuss at this gathering. While the talk raged on, so did the eating -- we consumed, among other things, a great deal of gumbo, catfish, and barbecue -- some of it in church-revival tents on the rolling Ole Miss lawns, some in Oxford's impressive restaurants, some under the stars. And no white wine at the booksignings, thank you very much; it was bourbon all the way. There was ample opportunity to chat with the other attendees from all over the country, including the food writers and historians: Nathalie Dupree, John Egerton, Shirley Corriher, Jessica Harris, among many others. Heady company, yet all friendly and forthcoming. I won't soon forget Joe Dabney, author of Smokehouse Ham, Spoon Bread, and Scuppernong Wine: Southern Appalachian Cooking (1999 James Beard Cookbook of the Year), regaling me with stories about his adventures as a newspaper reporter in search of Georgia moonshiners.

My education about the food of the American South is far from complete, but those three days opened a lot of doors for me, and completely engaged my interest in the food I'd eaten all my life without really thinking about it. I swear I'll never again cook some greens or bite into a biscuit without appreciating the fact that I am also eating history, economics, and human migration patterns, not to mention ecology, mythology, and anthropology. That's true of any food, and I think Thomas Wolfe was wrong; you can go home again.