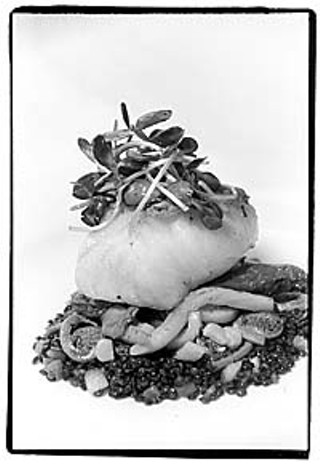 The epicenter, if not the paradigm, of Austin has shifted. Well, perhaps "expanded" is more accurate. Austin has been a fortunate Western city in that we've always had a vibrant downtown (the bust of the mid-Eighties excepted). Cities on the East Coast have always been that way; they were long-established before anyone had ever whispered "Henry Ford." They were formed and their roots firmly entrenched by folks on foot. So downtown in these cities was, and is, their nucleus. Some cities west of the Mississippi have more of a sprawling feel to them; in some it's difficult to pinpoint a "downtown." Here in River City, we've always had vibrant midtown neighborhoods and the city is where we come to play. Theatres, clubs, and restaurants have always been smack-dab in the center of an Austin map. But it ain't necessarily so anymore. There's a whole lot of folks with disposable income who like to unwind a little closer to their million-dollar bungalows by the lake. And businesses have obliged. One World Theatre, on Bee Caves, is far from the maddening construction of downtown. And first-rate restaurants are making their homes along 360. 22 (named for the intersection at which it sits: 2222 and 360) is an example.

22 opened in August in the same part of the tony Davenport Village Shopping Center that houses Siena, another upscale eatery. While having two upper-echelon dining establishments within 100 yards of each other might be more than your average shopping center could handle, this clearly isn't your average shopping center. Casey Lloyd, formerly a sous chef at the Four Seasons, makes his debut as executive chef here, offering a sophisticated menu that gives a nod to world cuisines as he employs such ingredients as wasabi, morels, panko, Israeli couscous, and Stilton in the entrées (although thankfully not all in the same one!).

22 is elegant in that minimalist, California sort of way. The walls are gently curved and unadorned except for their warm, soothing colors of ocher and gray. At least I think those are the colors; the lighting is kept very low and intimate, so it's hard to be certain. The lighting makes everyone more beautiful, but it can make reading the menu a challenge. Not to worry: Before you can tilt the large, heavy volume toward steadier light, a solicitous waiter is there with a pen flashlight to offer illumination. It's a telling gesture that typifies the level of service at 22. Bread is served not in a basket, but European-style with spoon and fork tongs delivering the baked in-house varieties as a diner's plate is emptied. From the doormen who relieve you of the arduous task of opening the doors to the thoughtful and knowledgeable wine steward who can guide you to a delightfully complementary wine to go with your meal, the staff is eager to make your dining experience gracious.

My first visit took place on a relatively slow Wednesday night. Although my friend and I called for reservations, we were seated in the back dining room directly behind the only other diners in the room. This curiosity became more bothersome when the couple engaged in a rather loud and profanely intimate argument. While the hostess could not have known where the couple's evening was headed, she could have seated us away from them in one of the many vacant tables, allowing both tables more privacy.

Drama aside, our dinner was a qualified success. We began with a superlative martini, soundly shaken, with miniature ice floes on top of the tangy gin ($7). Our first course consisted of the Pepper-Seared Foie Gras With Roasted Macadamia Pineapple Compote and Fig Balsamic Reduction ($15) while my companion opted for the Lobster Ravioli in a Sweet Corn Purée With Port Crème Fraîche, Shaved Asiago, and Chive Oil ($11). Sumptuous stuff, indeed. The ultra-rich foie gras had a passing, but impressionable encounter with the grill; the exterior was seared, but the integrity of the interior hadn't been compromised in the least. The macadamia nuts are obliterated by the butter-richness of the foie gras, but the pineapple and fig/balsamic reduction works nicely to provide a tangy counterpart. The lobster ravioli is richness defined.

We split the 22 Salad ($6), a hearty, manly combination of greens, tomato, avocado purée (which lends more texture than taste), and pungent stilton/bacon dressing. It's a salad sturdy enough to appeal to beef lovers.

For our entrées we selected the Quinoa Crusted Swordfish With Roasted Potatoes, Asparagus, Mushrooms, and Escargot Butter Sauce ($19) and the Sea Bass With French Lentils, Roasted Corn, Fennel, Chanterelles, and Green Onion Vermouth ($18). The quinoa, with their almost pearly appearance, make the fillet look enticing, but beyond that they don't add much. The fish inside however, was perfectly cooked -- just-firm, tender, excellent. The chanterelles almost stole the show, however. An entire block, small in size but containing the roots, was crisped nicely, which accentuates the woodsy flavor. My friend savored these, finishing off the last of them with sadness. My sea bass was utterly sublime. The high heat that served and seared the foie gras so well was at work here, too. The exterior has a satisfying crunch and the interior is rich, succulent, and sensual. The little green lentils add a lovely common note to the elegant fish; in fact, all the elements of the dish, with their earthy qualities, do a lovely job of making the sea bass an almost peasantlike meal.

A word should be said about the presentation of the dishes at 22. They are just this side of structural; you know, those engineered towers of food that are so fashionable. For the most part, the effect is lovely and the items are layered in a way that allows the flavors and textures to contrast nicely. Once in a while, however, it's just plain silly, as in the asparagus spears poking out of the rounds of roasted potatoes. It's like a second-grader's idea of alien eyes.

Although we had indulged in some pretty rich stuff, we made a stab at dessert and chose the Crepe With Cashew Praline Sauce ($7.50). The folded crepe and accompanying caramel sauce is lovely, but the nuts could benefit from an initial roasting to bring out their flavor more. While it is rich and rewarding, it isn't exceptional.

My second visit was on a busy Saturday night, and although the kitchen was kept hopping by the full restaurant, the food surpassed that of the first visit.

This time, the evening began with Seared Scallops With Sweet Corn Purée, Potato Nest, and Truffle Oil ($9) and a special of the evening, a duck liver pté reputed to be based on the chef's grandmother's recipe ($10). Both were outstanding and beautifully presented. The huge scallops boast that seared exterior at which the kitchen excels, and the interior is sweet and tender and succulent. A frizzle of flimsy potatoes contributes additional crunch while the corn and truffle oil purée plays nicely off the silky interior. Grandmother's pté is a winner; impossibly smooth and rich, it is served with a small mound of bitter baby greens: just the thing to contrast with the pté.

The soup special that evening, Mushroom/ Boursin Soup ($6), was too tempting for me to ignore; my husband tried the shrimp bisque from the menu ($6). While both soups show attention to detail as well as flair, the mushroom special is a revelation. Rather than being overwhelmed by the boursin (which is used sparingly), the cheese serves to make the purée deeper and smoother, and the earthiness of the mushrooms is thus accentuated further. I would request this soup on death row.

We reluctantly moved on to entrées. My husband chose the Grilled Beef Tenderloin With Truffle Potatoes, Asparagus, Mushrooms, and Escargot Butter Sauce ($24) and I opted for the Panko Crusted Prawns With Sweet Potato Napoleon, Crispy Oyster Mushrooms, Asparagus, and Sambal Buerre Fondue ($20). This is a meat-and-potatoes dinner taken about as far as it can go. The meat is fork-tender and deeply meaty in flavor, betraying its superior quality and it was perfectly rosy/red pink inside. My prawns had a sincere crunch that gave way to a sweet interior, which went perfectly with the spicy butter sauce. The yam Napoleon was fun, and although the mushrooms weren't crispy as advertised, they were still woodsy and delicious. These were exceptional dinners.

The wine steward found us wines that paired well with our meals. I opted for an Oregonian Pinot Gris ($6) while my husband tried an Alliance Shiraz ($8). These vastly different wines served our vastly different entrées well.

We didn't have much steam left, but we shared the Cookies and Crème dessert ($7.50), which consists of two small ramekins of creme brulée (vanilla and coffee) and an assortment of house cookies. The brulee are just right with the cracking burnt sugar top giving way like a cracking, frozen puddle to the custardy interior. The accompanying cookies include a raspberry shortbread, chocolate rounds, gingersnap, and a lemon butter drop. All lovely, but we found it impossible to finish.

I can imagine that if I spent the day creating a new economy, then fought traffic for an hour or more to return to my lovely hillside home, I wouldn't be too keen on the idea of retracing my steps to get a first-class meal downtown. In that case, I would often steer myself to 22, where the prices are realistic enough that those of us a little short on dot-com cash can partake of the luxury offered at 22.