How Austin Used to Celebrate 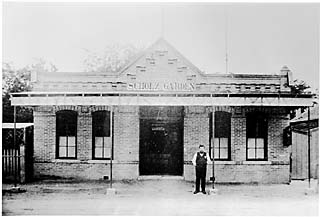 Entertainment has always been a keystone of Austin's identity. Even at the turn of the last century, when it was little more than a dusty frontier town, Austin was a lively place, with no shortage of amusements. Restaurants, bars, and theatres filled the downtown commercial district. In Hyde Park, Monroe Shipe developed a pleasure garden, with lakes, a concert pavilion, and facilities for tennis and croquet. Meanwhile, in the red light district, saloons, gambling houses, and brothels proliferated, providing entertainment evenhandedly to legislators and cowhands alike (see p.28). Even City Marshall Ben Thompson kept a gambling operation above the Iron Front Saloon. Although the City Council made feeble attempts to criminalize the tawdry business of the red light district, those efforts proved futile when the local "ladies" threatened to publish their client lists.

And among Austin's numerous diversions were German beer gardens -- Scholz's, Jacoby's, Pressler's, Turner Hall, and Bulian's. However, unlike the saloons and bars of the red-light district, which skated outside the periphery of respectability, Austin's beer gardens of the 19th century were tightly woven into the fabric of local social life. They were convivial places, patronized by both men and women, their families, and children. Started as private social clubs by local Germans, the beer gardens originally served as venues for meetings, social get-togethers, and performances. Different from bars and restaurants (which kept regular hours), beer gardens opened their doors at scheduled times or for scheduled events only. Jacoby's beer garden, for instance, held bimonthly concerts during the summer season only. These concerts were outdoor affairs to which people came not only to listen to music, but also to eat and socialize in a safe and carefree environment. Attendance was limited to members and guests only, and unlike Austin's libertine saloons, where knife fights and shootings broke out with shocking regularity (even among legislators), the proprietors of the beer halls regularly dismissed all potential troublemakers from the premises. As the German population integrated into the larger citizen body, though, the beer gardens eventually attracted a much more diverse clientele, and membership became open to non-German speakers as well. Beer garden happenings were shared by almost the entire community. In 1879, for instance, the local beer gardens, the Austin Turn Verein (the German social club), and the Austin Saengerrunde (German singing society) got together to sponsor the statewide Saengerfest in Austin, a musical event which the Austin Daily Statesman called "the most stupendous" in the city's history. In what was possibly Austin's very first South by Southwest, Turner Hall, Scholz Garten, Jacoby's Garden, and Pressler's Garden all participated, staging nightly musical performances. Two giant arches were erected along Congress Avenue and in front of the Millett Opera House to honor the event.

Beer garden happenings came with the official sanction of local government. When a troupe of Mexican gymnasts came through town in 1885, they performed at Scholz Garten, where the streetcars made special stops to carry the audience to and from the performance. And an 1899 flier for a performance of William Besserer's orchestra at Jacoby's Garden claimed that streetcars would remain in waiting to carry patrons home from the performance. Even in the exclusive Hyde Park suburb, which expressly prohibited bars, turn-of-the-century residents nevertheless supported the Hyde Park Beer Garden.

By the first decade of the 20th century, however, most of the original beer gardens had closed as their owners passed away. Prohibition finished the job; by the time it was repealed, Austin was a completely altered city -- the collective spirit of the beer gardens vanished as radios, televisions, and movie theatres replaced older, community-based entertainment. The buildings and their luxurious gardens (with the exception of the Scholz Garten building) no longer exist, replaced by office buildings and warehouses. And today Austin's old beer gardens are little more than the stuff of local lore and old-timey reminiscences. Scholz Garten: In 1866, August Scholz took over the management of Buass Garden, a German-language theatre located at 400 East Pecan (now Sixth) Street. Placing an advertisement in the Weekly State Gazette, he encouraged customers to patronize his establishment for parties, balls, or simply a glass of cold beer. By 1871, the business was thriving, and Mr. Scholz purchased several lots along San Jacinto and Cherry streets. In 1872, he built the building where Scholz Garten stands today. The garden featured two music pavilions and a large central fountain. Later a bowling alley was added where customers played nine-pins. Scholz Garten was the original meeting place of the Austin Turn Verein, the German social club that sponsored music and theatrical performances. And it was the birthplace of the Austin Saengerrunde.

As the membership diversified over time, Scholz Garten quickly became a popular place, attracting the rowdy and pious alike. According to local lore, notorious gunslinger and one-time City Marshall Ben Thompson celebrated here when he was acquitted of murder charges in San Antonio. A few years later, Father P. J. Hurth, president of St. Edward's College, was fêted at Scholz's in honor of being named bishop of India by the Pope. In 1906, the Austin Saengerrunde purchased Scholz's and continues to own it today. Scholz Garten is the only one of the old beer gardens still in operation. The building is now a historic landmark, commemorated for its 125 year-plus continuous operation, its charm, and as a meeting place for persons of local historic significance.

Turner Beer Garden: Back in the 1880s, young people flocked to Turner Hall on Sunday nights to do what was colloquially known as "the German," an activity that basically consisted of drinking beer and dancing until dawn. Turner Hall (Turner being a corruption of the German Turn), located at 18th and Lavaca, was built by the Austin Turn Verein, the German social club, in 1872. The most exclusive of all the beer halls, it regularly offered operas, plays, and other musical productions primarily to German-speaking clientele. Beer and food always accompanied the performances, encouraging its clients to socialize well past the curtain fall. Turner Hall was the social nucleus of the German population for more than 25 years. It closed around the turn of the century, when its owner, Carl Gustave Frenzel, died. The original limestone building that was once Turner Hall is still standing beneath the Scottish Rite Temple façade.

Jacoby's Garden: In the early 1870s, Walter Jacoby opened a dry goods store located on the northwest corner of 15th and Lavaca. He later added an ice cream parlor and a beer garden where he served up some of the best German cuisine in Austin. Together with Turner Hall and Scholz Garten, Jacoby's Garden formed the third partner in the Austin Turn Verein meeting circuit. But it wasn't only popular among Germans. Through time, it also became a well-known meeting place for prominent Austinites such as UT and St. Edward's college professors, Mayor Wooldridge, or Walter Tips. So entrenched was it among local lawmakers, in fact, that UT law school students invented a jingle about Jacoby's: "The junior law comes down to school, but doesn't get very far/until Jacoby catches him, and admits him to the bar." In addition to hosting Austin's most notorious schmoozefests, Walter Jacoby held an annual wine tasting and an oyster roast, both of which attracted Austin's leading citizens.

Pressler's: Pressler's Beer Garden was located between the river and West Pecan Street (Sixth Street) in Old West Austin. Built around a steam brewery started by Paul Pressler in the early 1870s, it operated for more than 30 years before being swallowed by residential development. Situated on what was then the western fringe of the city, its idyllic rural location made it the perfect spot for relaxing under live oaks with a frothy mug of beer. It had a concert hall that regularly hosted touring German singing and theatrical acts. The grounds around the concert hall were landscaped with curving walks, ornamental shrubbery, arbors, and a fountain. The extended grounds also featured a boating ramp, a shooting club, and an alligator pond. When concerts weren't being held, a giant crank-operated music box serenaded its patrons. Although Pressler's beer garden wasn't a regular meeting place for the Turn Verein, it nevertheless occupied a niche among Austin's German community. Pressler's participated in the 1879 Saengerfest, holding a gala performance that attracted the largest crowd any of the halls had ever seen. By 1910, Pressler's had closed, falling prey to the expansion of the city.

Bulian's Garden: When the Austin dam was built in 1893, creating Lake McDonald, Dick Bulian sensed a business opportunity. He opened Bulian's Garden along the shores of the newly created lake and invited pleasure-seekers to come visit for a leisurely weekend outing. The steamboat Ben Hur ferried people from the head of the lake to the dam, where Bulian's restaurant and concert hall were located. A late-comer among the beer gardens, Bulian's was never part of the German social club circuit. Nevertheless, it quickly became popular among non-German Austinites.

Its picturesque location and quality cuisine made this an attractive destination for weekend trips and fancy parties. In 1898, it hosted the reunion of the Grand Army of the Texas Republic. The party featured a boat ride on the Ben Hur, dinner, and dancing in the pavilion. Around the same time, it served as the endpoint for a prankish UT law student "uprising" led by the late Senator Tom Connally. A 1937 article in the Statesman related the story in which UT law students began firing two of the cannons on the lawn of the university in honor of Texas Independence Day. Rather than punish the students, though, the president of the university named the remainder of the day a holiday and closed the university. The boisterous law students formed a parade and rode to Bulian's, where they spent the remainder of the day celebrating their victory. Although a lively spot in its day, Bulian's did not flourish for long. The flood of 1900, which destroyed the Austin Dam, also destroyed Bulian's Garden.