At long last, Greg Beets has discovered Austin eateries where gluttony need not be constrained by the wallet impact of a la carte pricing.

A decade ago, Lubbock-bred Furr's revolutionized the art of cafeteria dining by introducing the all-you-can-eat option ($5.79 lunch/$6.29 dinner). This is one cafeteria where gluttony need not be constrained by the wallet impact of a la carte pricing. Just pile on as much salad, meat, veggies, breads, and dessert as your tray will hold and go to town. The re-order window is nearby for those not sated in one trip. Furr's food isn't quite as good as Luby's, but you get a lot more for a lot less. 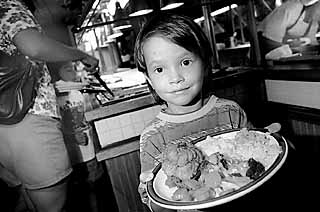 By far the most comprehensive American-style buffet in town ($5.69 lunch/$7.49 dinner), Golden Corral's Golden Choice Buffet offers everything from fried chicken to pizza to cocktail tacos amidst a bevy of soups, salads, baked potatoes, vegetables, desserts and delicious rolls baked every 15 minutes (you'll know the rolls are fresh when you hear the brass bell ring). Although steaks are Golden Corral's professed raison d'être, all but the heartiest of appetites can live happily on buffet alone. Your best bet is Wednesday night, when they add steak and fried shrimp to the buffet.

Although they can't match Golden Corral's selection, Hometown Buffet's ($6.70 lunch/ $8.65 dinner, beverages included) policy of only preparing enough food for 12 diners at a time results in better-tasting grub that rarely languishes under a heat lamp for extended periods. Their sizable pieces of fried chicken are plump and juicy, and the BBQ beef ribs are better than you have a right to expect from a place like this. Hometown Buffet also makes better work of salads, starches, and vegetables than the competition. Even their soft-serve ice cream is superlative. Just don't let all those Norman Rockwell prints freak you out.

Despite minor cosmetic improvements to the décor, Ryan's "Hot Mega Bar" ($5.79 lunch/ $6.79-$7.79 dinner) still has trouble delivering a wealth of food that is edible, much less tasty. Fried chicken that was ice cold on the inside and shriveled-up fish filets purporting to be salmon and Velveeta-style cheese enchiladas were among the gag-inducing lowlights of one recent visit. At least the rolls were good. Friday and Saturday nights feature all-you-can-eat steak and shrimp on the buffet for $7.79, but make sure to watch what you eat.

In the days before Golden Corral introduced the "Golden Choice Buffet," Sirloin Stockade ruled the roost among down-market family steak houses with meal-in-itself food bars. Bonanza and Western Sizzlin' didn't come close, and both left Austin long ago. Now Sirloin Stockade finds itself in the perilous position of playing catch-up to the Corral. Though they've added a bakery and trumped up their buffet a bit ($5.19 lunch/$6.49 dinner), Sirloin Stockade still can't compete with Golden Corral's variety. Nevertheless, you can usually add a made-to-order steak to your buffet at the Stockade for only a buck or so extra.

Second Helpings: Mother's Day Brunch, Sunday, May 13
It's your dime – make it count for your momma