The Intimate Charms of Basil's 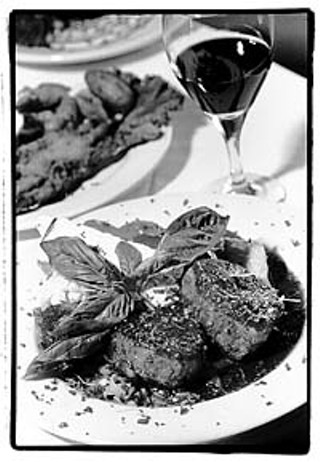 Beef filet served over portabello mushrooms in a port wine demi-glace, garnished with a wedge of Italian gorgonzola cheese (Photo By John Anderson)

I moved to Austin about 10 minutes after the golden era ended. By that I mean shortly after the Armadillo World Headquarters closed. The closing was in recent memory, and the wounds were still deeply felt. As we've all heard and read a lot lately, Austin at that time was quieter, hipper, cleaner, more affordable, less congested, etc., etc., etc. Hell, if you believe all that nostalgic blathering, Austin used to be a veritable nirvana and now it's nothing but a repository for rich, soulless dot-com Californians who don't appreciate our unique jewel. When I arrived at this paradise, I lived in the requisite funky large house near campus with multiple and rotating residents. I partook of the cheap thrills the city had to offer, including dining at several quirky and charming eateries. But one night, I was treated to what has to be an almost ideal date for a newcomer to Austin: dinner at Basil's and then on to Esther's Follies. Perfect! The romantic meal was sublime and sophisticated, which allayed my fears that I might have landed in some exclusively granola-and-beer destination, and the entertainment confirmed my hopes that the city was a haven for left-wing, smart-aleck, artistic types. Some 15 years later, Basil's is still a noteworthy dining destination and Esther's Follies is still packing them in at the pool on Sixth Street.

Situated in a charming old frame house adjacent to Shoal Creek, the place screams -- no, whispers -- romance. Glowing wooden floors, lace curtains, and flickering votive candles add to the coziness of the place. The restaurant houses a mere 15 or so tables; every table feels intimate. You spontaneously slow down and breathe easier when you enter. This is not a hipster hot spot that is peopled with folks checking the door to see if someone more interesting than their current partner has entered. People come here to concentrate on each other without distraction.

On a recent weekday evening, we found the place as popular as ever, filled to capacity by 6:45 or so. The clientele appeared to be a mix of co-workers on expense account outings and small parties of friends and/or lovers out to make a weeknight special. To help in that endeavor, the service is smooth and professional. The waitstaff doesn't attempt to befriend you; they are there to serve you. Despite the sudden influx of diners filling our servers' section to capacity, she never seemed harried or rushed. We were always made to feel that our particular party's satisfaction was paramount to her.

Upon being seated, we were treated to a basket of warm, crusty bread slices paired with a crock of bold garlic butter. By "bold," I mean that the chef isn't shy about the quantity of garlic in the blend. The hostess informed us that plain butter was available if we found the garlic too intense, but in our book there is hardly any such thing.

As you might expect, the Italian menu is considerably more ambitious than your average meatball joint. But neither does it navigate new and uncharted waters. The menu seems to be striving for a sophisticated country Italian balance. Pastas are represented in force and many familiar items are represented. Paglia e fieno (translated literally "straw and hay"), green and white fettuccine in a creamy parmesan sauce with prosciutto and peas, makes an appearance, as does aglio e olio (spaghetti with a garlic olive oil sauce), which is paired with fettuccine rather than the more traditional spaghetti. Beyond pasta are an impressive array of meats and seafood options. On our recent visit, some seafood specials proved to be too much to resist: a soft shell crab appetizer and a halibut entrée. My dining companions (my husband and eight-year-old daughter) opted for scampi with egg spaghetti and the rich paglia e fieno.

The soft shell crab ($11.95) is deep fried rather than sautéed, the more common preparation, but a light touch with the breading and the frying keeps this method from overwhelming the delicate crab. Not only is a whole crab on a plate a strangely beautiful temptation, but the ability to eat the crustacean whole makes it a most satisfying way to enjoy the sweet, delicate meat. The crab is served with a horseradish sauce, which fortunately is served on the side in its own small bowl, as the assertive flavor of the pungent horseradish is far too bold for the tender crab. My husband opted to begin with that evening's soup offering: cream of tomato ($5.50). You know those commercials that tout the sophistication of Progresso soups over Campbell's? Well, this soup is a more pleasing option than either of those. It's actually not so different from the Campbell's soup you might identify in a blind taste test, but it's infinitely more sublime, fresh, and tomatoey. We all agreed that a cup of this soup paired with a grilled sharp cheddar sandwich would make an ideal rainy-day lunch. My daughter tried the now-ubiquitous fried cheese ($6.95). This version takes fontina to the fryer, but while the results are more flavorful than the more common rubbery mozzarella, its taste is still not far removed from the bar food you see everywhere. The chunky tomato dipping sauce is a deeply flavorful accompaniment.

The halibut special ($27.95) is lightly floured and pan-seared, topped with lump crab meat and sauced with a tomato/basil beurre blanc. When done properly, this method of preparing fish is one of my favorites; it produces a satisfying slight crunch to introduce the fish and keeps the interior moist. Basil's attempt is a complete success. The surface is just seared enough, and the fresh meat interior is perfectly done. There is a generous portion of the sweet crab meat topping the fish, and the tomato/basil sauce is a tasty finish. It is also something of a stroke of genius, as the beurre blanc base of the sauce softens and refines the usually rustic tomato/basil combination, making it a better match for the seafood. The paglia e fieno ($14.95) is mostly a success; the rich, creamy sauce naps tender peas, and the green and white fettuccine is properly al dente, but the bits of prosciutto are sliced rather thickly before dicing, which leaves the meat too resistant to the tooth. While I appreciate the attempt to introduce a variety of texture to the cheesy dish, the meat became pellets which were too jarring and diluted its flavor contribution. The scampi ($22.95) comes with egg spaghetti. An incredibly generous serving of plump, fresh, and enormous shrimp rings a small mountain of thin noodles. The shrimp are perfect but the spaghetti, while delicious, was a few seconds past the point of al dente. Still, we found ourselves dipping our forks into the pasta mound time and again.

The wine list at Basil's deserves notice. Besides a nice selection you would expect to find at an establishment of this caliber, the list also boasts some "Basil Finds," Italian wines generally made in smaller batches and seldom seen on restaurant lists. Our server was well-versed in the cellar and engaged us in a helpful conversation, soliciting our preferences before suggesting a red that worked with both entrées beautifully. At $38, the wine was a very reasonable find.

We all packed up generous portions for the next day's meal in order to save room for dessert. While Italians generally don't indulge in desserts like Americans and the French do, at Basil's they don't feel strictly bound to the Italian methods (note the beurre blanc) and they let go with all-out indulgence. Take the chocolate tart with buttercream ($5). Yes, it's your basic slab o' fudge ganache in a flaky pastry that is rich enough in its own right, but the killer de grace is the mocha buttercream that tops it. And by buttercream, they mean the real thing, the kind that calls for a full pound of butter to be incorporated into the flavor base. This is the kind of fare that gives French pastries the decadent reputation they deserve. And it's the kind of inspired indulgence that reminds us that there really is no substitution for butter. We enjoyed three bites each before we were happily catatonic.

It is no small feat for a small upscale restaurant to remain in business for 15-plus years. It's even more remarkable to remain vital during that time. Basil's succeeds handily, providing Austinites new and old with one of the most romantic, dependable, and delicious dining experiences around, and one that feels uniquely Austin in nature.