After authoring almost 30 books on chile and fiery foods, could Dave DeWitt possibly unearth anything new about chile peppers? That was what I set out to determine when I picked up a copy of The Chile Pepper Encyclopedia (Morrow, 338 pp., $19.95 paper).

DeWitt is a guru in the chile world, founding Chile Pepper magazine in 1987, the National Fiery Foods Show the following year, then launching Fiery Foods Magazine three years ago. An impassioned chile lover myself, I appreciate DeWitt's burning pursuit of fiery foods that has consumed his life. If anyone could fill a book with fascinating chile anecdotes gathered from every nook and cranny of the world, I knew it would be him.

So, it seemed fitting that we met in our hometown of Albuquerque, New Mexico, at the height of the chile harvest. As we sipped our early morning coffee, the fragrant smoky aroma of green chiles being roasted around town was already wafting through the crisp fall air.

DeWitt explained that after collecting information on chile peppers for a quarter of a century, he'd assembled enough to fill a shelf of comparable Encyclopedia Britannicas. It had actually been a challenge to condense the most significant topics into a single one-inch-thick volume. In 338 pages, he tried to answer just about any question anyone could ask about chile.

Had he succeeded? Let's see what you might want to know. I flipped through the pages and noted 10 questions:

1. For you Survivor fans, is there such a thing as rat turd chiles and are they edible?

2. What wild chiles found in Texas are believed to be the closest surviving species to the earliest chiles of Bolivia and southern Brazil?

3. Why should you keep your pet cat out of your chile garden?

4. What is Lardy paper and slabber sauce?

5. What are the five keys to making perfect homemade chipotles?

6. Why is red chile, not green, the worldwide cure for hemorrhoids?

7. Can chalk and hair dyes be made with chile?

8. Can eating chile help you "burn" calories and lose weight?

9. What little country has the world's highest per-capita chile consumption?

10. What is the original mole of Oaxaca?

Whether you're a chile head or novice, how many did you know? I'm guessing you'll want to read the book just to find out the answers! These don't begin to allude to the hundreds of entries identifying obscure chile pepper varieties found around the world, the history and uses for all sorts of chiles and chile products, growing tips, and over 100 recipes representative of the world's chile cuisines.

Unlike library encyclopedias, this one's hardly dull, especially for those who yearn to keep a fire stoked in their bellies. DeWitt's travels in search of unusual chile lore and recipes have taken him through Africa, the Caribbean, Australia, and the Andes. He has a trek through India planned for this fall, so I won't be surprised if Indian curries play prominently in a future book. I asked DeWitt if he had uncovered an especially interesting chile legend among his collection of folklore.

"The Cuna Island Indians off the Panama coast purport to drag chiles off the ends of their dug-out canoes to rid the waters of sharks," he said. "No one is sure if it works or not, but who's going to challenge sharks to find out?"

When it comes to chile cooking, like most New Mexicans, chile is an essential part of DeWitt's daily diet. I had just packed away our annual 100 or so pounds of fresh New Mexico green chile in the freezer for my husband and me, and knew New Mexicans ate and grew more chile than anywhere else in the country. DeWitt stands out as an aficionado, though, eating and growing considerably more varieties than most locals. For a recent book he wrote with Paul W. Bosland, Peppers of the World: An Identification Guide, they grew 315 varieties. Dave's chile garden is renowned in New Mexico and by visitors to his Web site (www.fiery-foods.com). Nowadays, he understandably limits his gardening to just a few dozen varieties each year in keeping with a theme. This year, he planted a Oaxacan chile garden and was just getting ready to harvest the peppers when we talked.

Chile lovers understand this passion and appreciate the flavorful nuances and pungencies offered by different types. DeWitt's personal favorites are anchos with their raisiny characteristics, pasillas -- so essential to moles -- and habaneros with their aroma he loves with tropical fruits. There's almost no food that can't be invigorated with chile, a belief which prompts him to host the annual Scovie Awards, which has become the chile industry's top competition for every chile product imaginable.

The fiery food industry shows no signs of fizzling out, and the foods become more flavorful and creative each year. Several years ago, for example, Sandia Shadows Winery in Albuquerque was the first to introduce red and green chile wines made from traditional wine grapes and New Mexico chiles. These native favorites still manage to capture the flavor and aroma essences of the state's chile harvest each year. "A new winery in Australia, Disaster Bay Chilli Company, has taken that concept further," DeWitt said. "They just introduced the first bottles of a wine made entirely from New Mexico chile, cayenne, and habanero peppers. It's a medium-hot sweet wine with a soft green hue."

DeWitt is obviously on the watch for anything chile-related. There was one last burning question I had to ask. Could he settle the debate once and for all as to what is the world's hottest pepper? Recent news reports out of Guwahati, India, claimed to have discovered that the Indian Tezpur chile is the hottest on earth at a whopping 855,000 Scoville units. He answered skeptically with his own challenge to India to bring their peppers here for independent testing. "If their claims are correct," he said, "that would make it 300,000-400,000 units hotter than the Red Savina Habanero, which is widely considered the hottest."

I guess there really is chile news yet to be made and plenty more hot stuff to come.

Sandy Szwarc, CCP, is a food editor and writer for national media, and author of Real New Mexico Chile: An Insider's Guide to Cooking With Chile.

The Hottest Commodity
Once green with envy, Texas now joins New Mexico in championing the chile 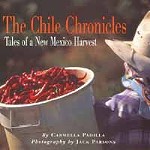