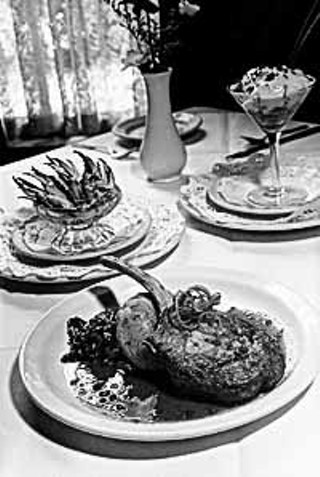 In the early Seventies a brick house built almost 130 years earlier by Sterling Goodrich, and later owned by Michael Paggi, one of Austin's first ice manufacturers, was condemned by the city. Although it was eligible for the National Register of Historic Places, it had suffered years of neglect when its owners, the children and grandchildren of Mr. Paggi, moved away to start families of their own. But before demolition could occur, a development group bought the property intending to turn it into a restaurant. Meanwhile, historic preservationists began to take an interest by rallying for a historic designation for the dilapidated old building. In what was to become a triumphal teaming between historic preservationists and the business community, the house was listed on the National Register, became the site of archaeological excavations, was restored, and finally converted into a restaurant. The Paggi House opened in 1980 and immediately became known as one of Austin's most beautiful and best dining establishments.

Twenty years later, the restaurant is still one of Austin's finest. It is a romantic spot -- a first-date place, or the kind of restaurant you'd choose for a spousal special occasion. Two dining rooms flank the central hallway in this 150-year-old home located on Lamar and Riverside. A sunny greenhouse-style room added on to the rear of the building serves as a bar and a smoking room. The old stone outbuildings that once housed a milkroom and servants' quarters have been transformed into bathrooms and offices. The décor is quaint and old-fashioned without being cutesy. Antique chairs surround elegantly clothed tables. Soft lighting, antique pewter plates, and flowers at every table make the effect immediately endearing.

On paper, the menu (which changes twice a year) falls on the conservative side. Regular entrées include a safe filet mignon ($24.75) served with a choice of three sauces, and a grilled chicken with polenta and shiitake demi-glace ($17.25). Crab and shrimp seem to dominate the appetizer side of the carte which features comfortable creations such as shrimp cocktail ($7.50) and gulf crab claws ($8.75) with aioli. After 20 years, the Paggi House leads a loyal band of followers who return regularly for certain comfort foods. And 10-year veteran chef Michael Alvarez does his best to keep his hamlet happy. He'll prepare anything for his regulars, whether it's on the menu or not. Nevertheless, the Paggi House still manages to remain in step with culinary fashion, mating trendy tastes to classic preparations. Daily changing specials are inspired by the foods Alvarez and his staff themselves love to eat, foods that are enduring, simple, and fresh, yet sophisticated and elegant. Alvarez's playful, colorful flavor juxtapositions transform time-worn favorites into delightfully fresh first impressions.

For instance, a generous sprinkling of crabmeat turns an old-fashioned vichyssoise (chilled potato and leek soup, $4.75) into an elegant seafood soup in which crab, leek, and potato team together in melodious harmony. Or consider their crab cake appetizer ($9.25), which may be one of the finest Austin has to offer. The dish dazzles the senses in an unusual pairing of tangy mustard vinaigrette with buttery, spicy crab croquettes. Served over a mound of wilted spinach, it forms a study in contrasts wherein the disparate elements bind together like a well-composed painting.

Also delicious is the Paggi House's Lobster Martini. Festive and fun, this little cocktail arrives in a martini glass, garnished with brined onions and sprigs of chive (technically making it a Gibson, but why be fussy?). The glass holds a delicate salad of lobster and avocado married with a foamy lemon aioli. The product is superb, although for $10.50 I found myself wishing for just a little more lobster and less avocado.

Alvarez's strength as a chef lies in his ability to use bold ingredients in moderation. I applaud a chef who is not afraid to use a little bacon grease, especially when the result is as fine as Paggi House's roasted quail with bacon and fresh chile sauce. Bacon permeates both quail and sauce, which are offset by a rotund green chile pique that saturates the tastebuds with a quivering, autumnal flavor. The result is an entrée that's bacony but not greasy, rich but not too heavy. I devoured it!

Another special, a seared veal chop topped with tomato, basil, and mushroom ragout ($26.75) vibrates with flavor. The chop is absolutely tender, the sauce bold and meaty. And a rack of lamb listed on the regular menu is a whole rack of lamb ($28.25). Eight lamb chops crown a tempting pool of demi-glace, thickened with a restrained swirl of goat cheese. As with most entrées, these are buttressed by a small pile of mashed potatoes and fresh vegetables du jour.

The kitchen, however, is prone to occasional misfires. A seared halibut special ($19.75) arrived slightly overdone, which, with fish, can be almost disastrous, since overcooking depletes its natural oils, causing it to lose flavor. The halibut was served with an orange-ginger buerre blanc and roasted red peppers, a successful combination, though it could have used a little more salt to truly bring the flavors into harmony.

In fact, the cuisine at the Paggi House tends to be lightly salted in general, which is fine when it comes to the well-seasoned centerpiece foods. However, the mashed potatoes that appeared on most of the entrée plates definitely needed a little plumping. Although it's a small quibble, plain-tasting potatoes do detract from the overall effect of a dish. After all, why settle for good when with the addition of a little salt, a dish can become a work of art?

Desserts, predictably, are not fussy, but rather comforting, sweets. They are the kind of foods that end a meal on a long, low, resonant note, leaving the diner peacefully sated. Flan, apple pie, pecan pie, and chocolate terrine will appeal to almost any craving. The bread pudding ($5) served with dried, candied cherries and whiskey butter sauce is moist, light, sweet, sticky, and simply divine.

Service is unobtrusive, yet efficient and friendly. When I gently mentioned that the halibut was a little more cooked than I like it, the manager insisted on replacing it. The kitchen and staff consistently maintain an even pacing for all the courses, which arrive promptly a few minutes after the previous one is finished. There are no fashionable waits, no dazzling decorative flourishes. Secure in its maturity, the Paggi House is one of those restaurants that hovers above the maelstrom of faddishness. And despite a few flaws, this unique, historic restaurant remains one of the most precious gems in Austin's dining scene.