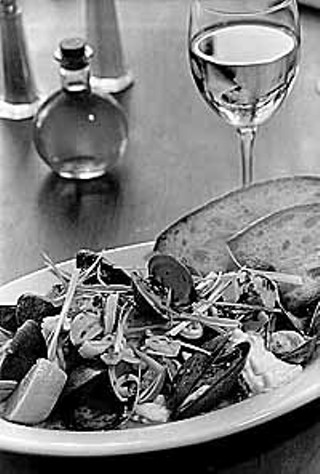 In the opening act of Verdi's La Traviata, the doomed courtesan Violetta drinks champagne and vows "to live only for pleasure ... ever seeking new delights ... live for pleasure night and day" in the famous aria, "Sempre libera." Though a negative medical diagnosis prompts the lovely Violetta to give her remaining life over to pleasure, it need not take such drastic motivation for Austin diners to surrender themselves to the culinary pleasures awaiting at La Traviata, a new Italian trattoria downtown. The La Traviata menu offers diners the opportunity to experience classic regional dishes from Italy and the Mediterranean presented in the simple, innovative style of chef-owner Marion Gilchrist. After several meals at La Traviata, I suggest that you, like Violetta, seek new delights there, both night and day.

This smashing new eatery is the creation of former Austinites chef Marion Gilchrist and her brother and sister-in-law, Dan and Olga Gilchrist. Chef Gilchrist returns to Austin after study at the California Culinary Academy, several years honing her skills in the top restaurants of Santa Fe (Coyote Cafe, Santa Cafe, Cafe Escalera, the Double A), and a stint as sous chef to Stephan Pyles at Star Canyon in Dallas. Though another sibling, Joan Gilchrist, owns the successful Andiamo in Santa Fe, Marion, Dan, and Olga chose to set up shop in Austin and found the perfect home for La Traviata in a historic Congress Avenue building. The long, narrow dining room has washed limestone walls, the original hardwood floors, an elegant mirrored bar running the length of the room, and sunny yellow accents that suggest the warmth of the Mediterranean sun. Genuine Italian trattorias are small family restaurants offering personal renditions of traditional regional dishes. The Gilchrist family has created an authentic trattoria with a thoroughly pleasant atmosphere in which to enjoy the hearty, robust flavors of Marion's extraordinarily good cooking.

I first visited La Traviata when they opened in July. Another local critic and I were scouting new restaurants and happened into La Traviata the first night they opened for business. There weren't too many people in the small dining room, and we studied the simple, straightforward menu at length, choosing to start our meal with a salad of roasted beets ($7) and an order of Crispy Polenta ($6). The roasted beet salad is truly remarkable, offering many contrasts in both texture and flavor. Chunks of sweet, tangy, roasted beets are tossed with cubes of smoky pancetta on a bed of slightly bitter arugula, and the salad is topped with a warmed slab of deliciously salty ricotta salata. What a feast! I almost shied away from the Crispy Polenta because the menu mentioned a Gorgonzola sauce and I've often found the strong-flavored Italian bleu cheese to be overpowering. That worry proved to be unfounded in this wonderful dish where a square of warm, rosemary-accented polenta has developed a crisp crust under the broiler and been placed in a pool of creamy Gorgonzola sauce. The hearty dish strikes just the right balance of flavors with the sweet corn and fragrant rosemary holding their own with the carefully moderated Gorgonzola. I cleaned the plate and used some of the excellent Sweetish Hill artisan bread to sop up the very last bit of sauce.

Our entrée choices that evening were equally impressive. I chose Spaghettini Bolognese ($11.50) while my fellow critic opted for the Seared Scallops ($17.50), and each of us found our dinners completely satisfying. Chef Gilchrist's take on the traditional sauce Bolognese is a thick, flavorful ragù of veal, beef, and pork studded with carrots and onion, draped over a plate of perfectly al dente tendrils of locally made spaghettini. It's a wonderful version of simple Italian comfort food. The scallop dish has a somewhat more complex profile, displaying hearty layers of flavor. The base is a serving of almost soupy, herb-accented cannellini beans topped with a crown of barely wilted, succulent baby spinach leaves. The spinach is surrounded by plump scallops, seared to produce a golden crust and meltingly moist within. The whole affair is then dusted with toasted hazelnuts and bread crumbs for a delightful crunch. Mama mía, what a meal!

A late-summer lunch outing to La Traviata produced similar success. Knowing the restaurant has quickly become a favored lunch spot for downtown business types, a friend and I waited until a little after one to drop in, when we found both parking places and a sparser crowd in the comfortably appointed dining room. The lunch menu is a simpler, more moderately priced version than the dinner offerings and from it we chose the La Traviata Salad ($5.50), Spaghetti Aglio Olio ($7), and Pasta Norma ($8). The house salad features a bunch of tender, tart arugula leaves tossed in a tangy dressing of bleu cheese and buttermilk, surrounded by wedges of fresh Roma tomato. It made a very enjoyable preamble to our pasta choices. Spaghetti Aglio Olio is a classic Roman pasta dish made with nothing more than thin noodles dressed with garlic sautéed in olive oil and a dusting of toasted bread crumbs and fresh grated Parmesan cheese. From the La Traviata kitchen, it's simply smashing. The Pasta Norma featured toothsome penne tossed with the last tender eggplants of summer in a rich tomato-basil sauce complemented by a warm Ricotta Salata. Bitter eggplant could easily have marred this hearty dish, but careful attention to every detail had seen to it that only mild eggplant and the sweetest tomatoes went into the sauce.

The four dessert choices that day were so tempting we couldn't eliminate any. We greedily requested a sampler, and the kitchen graciously complied. The platter included a dense, golden slice of polenta pound cake, a dainty mound of orange panna cotta, a tulip of tart raspberry granita under a dollop of whipped cream, and the house version of tiramisu. We moaned and ahhed our way around the oval platter, unable to choose a favorite, so all four get a resounding recommendation. The pound cake has a wonderful nutty flavor that paired beautifully with fresh berries and whipped cream. The panna cotta, a traditional baked custard, is flecked with fresh vanilla bean and derives its subtle orange flavor from Grand Marnier. It's smooth and delicate, cool and delightful. Though tiramisu has been done, done, and overdone, the version here is not overly sweet and has a definite espresso bite accented with toasted hazelnuts that sets it apart from some others we've tried around town. The granita, a late-afternoon treat close to the heart of all Italians, is crunchy, granular flakes of puckery raspberry ice under a rich blanket of slightly sweetened whipped cream. Remember Violetta: Life is short; order plenty of dessert.

Our most recent visit to La Traviata found five friends seated at the front window table, happily toasting with chilled Proseco and sampling appetizer specials that may soon appear on chef Gilchrist's fall menu. The divine risotto fritters were creamy ovals encased in a golden crust complemented by wild mushrooms in a rich red wine reduction sauce. The fried radicchio was a complete revelation. It would never have occurred to me that tender bunches of the succulent vegetable fried in a lacy batter and served on a bed of sweet cippolina onion slices and briny Niçoise olives could be so delicious. It you find either dish on the menu or offered as a special, don't hesitate to try them.

La Traviata is a young restaurant which hopefully has many years of innovation and success ahead. The casual atmosphere is inviting, drawing patrons into the busy, sometimes noisy, convivial scene, satisfying them with friendly, attentive service, a well-chosen wine list, a full bar, and excellent food. It pleases me enormously to see a female chef creating a restaurant that can boast as high a caliber as any other independent restaurant in the city. I'm convinced that the accomplished chef Marion Gilchrist will soon be one of Austin's culinary stars. I plan to surrender myself to the pleasures of her cooking as often as possible and suggest that you do likewise.