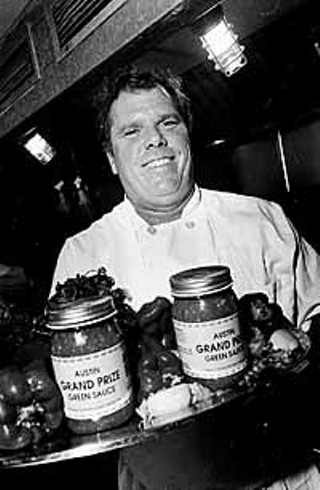 Take a Connecticut kid and send him to the Culinary Institute, then transplant him to Texas in '78 and put him in charge of running the kitchen at the Green Pastures, then later sorority and frat houses, and finally the kitchen at The Yellow Rose. Does this sound like the proper recipe to produce a salsa magnate who has won or placed in at least one category in seven of the last nine years of the Chronicle Hot Sauce Contest, both as an individual and also in the restaurant category? It may seem an unlikely chain of events, but every sordid word of this tale is true.

John Randall began his trek to chile greatness 10 years ago when he entered his first contest while representing the Green Pastures softball team, the Peacocks. He had learned his salsa secrets from the Latino kitchen staff there, and they had apparently taught him well.

It was the year of the big boasting-rights challenge for best hot sauce between the cities of San Antonio and Austin, and John's concoction won the grand prize. He decided to bottle the sauce and he needed a label, so "Grand Prize" seemed a choice that at least had some name recognition and history to bank on.

John started out bottling it himself at home in his kitchen and retailing it through the old Fresh Plus Market on 24th Street. They would call him when they ran low, and he would crank out an ever-increasing batch to fill the need. Now, Grand Prize salsa is found in over 400 supermarkets nationwide, and is custom-bottled by Austin Kitchens.

It's a business that takes a while for the money to roll in. The distributor calls the manufacturer, who then calls him, and John has to come up with half the production money up front for the batch to be run, and half when it's finished. Then the distributor doles it out to the supermarkets and waits to be paid. When the distributor collects and takes his cut, John gets what's left. "I'm in serious need of a PR dude and some venture capital," he said. "This is no way to get rich."

John has won the most victories with his red varieties, made from pickled and fresh jalapeños and serranos, which are cooked by boiling. This is the salsa featured at The Yellow Rose, and he goes through about four gallons of it a week. His green sauce, which is used at the Rose only on the green enchiladas, gets its heat from roasted poblanos. If John has a "secret ingredient," it would be the inclusion of white and black pepper and cayenne in all of his salsas. Every year he enters both red and green as an individual, and enters the Yellow Rose in the restaurant category with both colors of salsa as well. Randall uses chile pod alchemy to construct the salsas in slightly different formulations in the individual and restaurant categories in hopes that one of them will strike gold with the judges. John has mastered the art so well that this weekend he will be inducted into the Salsa Hall of Flame both for his work as an individual and his creations for The Yellow Rose.

We had to ask how, with his background, he ended up at the Rose. "I had a friend who was the day manager, and he needed some consulting done -- I've been there for four years, and counting," he says. Another obvious question was answered this way: "Every now and then some new talent will catch my eye, but I don't even notice them anymore." Randall is anxious to defend his bragging rights at this year's competition. "I can't wait, I'm pumped, and those other losers better be ready!"