Taking the Good With the Bad at Jalisco Restaurant and Bar 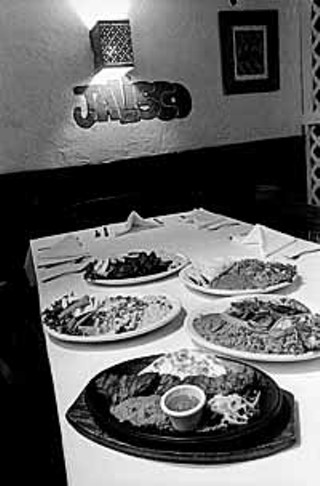 Good Mexican food has many different connotations. Depending on individual taste, a good Mexican meal can mean cheesy enchiladas, lardy refried beans, or a tender, flaky Huachinango a la Veracruzana. In fact, good Mexican food can describe anything from the haute, French-finished Mexican dishes prepared by Fonda San Miguel's Roberto Santibanez, to the very American celery and chili powder sauces of Trudy's. Mexican food is simply one of those cuisines that is so entangled in Austin's collective culinary habits that any attempt to objectively isolate good from bad is like untying Gordius' knot.

Thus, from the reviewer's perspective, making a judgment about a Mexican restaurant seems similar to what it must have been like to invent Microsoft. There are simply no standards on which to rely. After visiting Jalisco several times, for instance, I wouldn't consider it great or even good. But please, dear reader, do not be discouraged by my forthright opinion. Read on, and decide for yourselves whether Jalisco offers the type of fare you enjoy.

Located at the corner of South First Street and Barton Springs Road, Jalisco inhabits that purple-toned building covered in green and red trumpet vine that seems so inviting, so very Mexican. Inside as well, Jalisco has the feel of a Mexican hacienda -- dark and cool, with stone-tiled floors and talavera lining the walls. Mariachis stroll through the dining room, singing romantic tunes. Small wooden tables surrounded by straight-backed wooden chairs complete the quaint colonial ambience. But don't look too closely at the cobwebbed corners. Don't examine the stained walls and scratched plaster, or you'll be disappointed. The fact is underneath the pretty décor, Jalisco is a little dingy, a facet I have always been willing to overlook when I feel that the cuisine is very good. But on more than one occasion my dinner companions and I have been dissatisfied.

The menu at Jalisco looks promising: It features simple ranchero-style Mexican favorites such as al carbon meats, beef and chicken in adobo sauce, and chiles rellenos. It also boasts a substantial seafood section, suggesting that fish dishes may be a kitchen specialty. After all, Jalisco is one of Mexico's coastal provinces, and so it seems reasonable that popular items such as snapper in Veracruz sauce, and shrimps in garlic sauce make an appearance on the carte. In fact, the decidedly Mex-Mex tone of Jalisco's menu is an appealing change from the yellowed, queso-laden fare offered at most Tex-Mex-style restaurants in the city.

Although we were first tempted by some of the racier dishes -- such as their muy picante pork, or one of their seafood specialties -- we started off easy, ordering the tacos al carbon ($8.45)and fajitas adobadas ($9.45). The tacos arrived as I had hoped, with chopped bits of grilled skirt steak covered with corn tortillas, garnished with minced onions and cilantro, and accompanied by a ramekin of spicy tomatillo sauce. This, I thought, is how tacos are meant to be, not filled with mealy ground beef in old El Paso seasoning, not smothered in iceberg lettuce and cheese. But wait! As I picked up my taco, I discovered in horror that the tortilla was drowning in grease! Not just a little grease (I actually like my Mexican food well larded), but so much grease that it was difficult to pick up the tacos without seriously risking a dermatological condition. To top things off, the meat was decidedly chewy, despite the small pieces into which it had been chopped. The fajitas in adobo didn't fare much better. The waiter initially brought us a plate of plain fajitas, instead of the fajitas in adobo we had ordered. After realizing his mistake, he whisked away the plate, only to return immediately from the kitchen with the same plate of fajitas. However, this time they were covered in crimson sauce. It wasn't quite what we had in mind when we ordered the dish, but unwilling to challenge the kitchen's culinary decisions, we accepted the plate and began our degustation. The adobo sauce was actually quite smooth, zesty, and well-blended, dancing with the flavor of roasted chiles, tomatoes, and cumin. The viand, however, was old and tough, so tough, in fact, that it was almost unchewable. We left Jalisco that evening feeling ambivalent: "It should have been better," we mused as we speculated that perhaps the kitchen was having an off night.

On a subsequent visit we discovered that the kitchen does seem to do better with stewed meats than with grilled. The muy picante pork ($8.95) we ordered was exactly as both menu and waiter described -- one of the hottest dishes we were likely to taste. The stewed and shredded pork was both tender and bold, with a flavor that tapped upon the tongue with absolute forcefulness. The traditional carnitas ($8.95) also stood up to the rigors of judgment. The stewed and lightly refried bits of pork yielded instantly to both fork and tooth. Simply spiced with garlic and cumin, these carnitas were basic yet wholly acceptable to the palate. Accompanied by burly flavored refried beans, Mexican rice, and guacamole, the various elements made a perfect filling for a corn tortilla. These, however, had undergone the same treatment as the tortillas we tried on our first visit. Dripping and soggy, the poor tortillas limply cowered around their filling after falling prey to an oil slick on the griddle. My spirits sank as I carefully attempted to arrange the unwieldy and grease-soaked taco.

Ironically, though, Jalisco's chicken chile relleno ($9.75) is surprisingly light. Unlike most rellenos, which are usually fried then blanketed with melted cheese, this chile relleno suffers neither fate. Instead, the chicken-stuffed roasted poblano emerges from the kitchen shimmering in its own simplicity, dressed only in an uncomplicated costume of mild ranchero sauce (our waiter told us that the lunchtime chile relleno was fried, but that the dinner relleno was not). I would not recommend the Tequila de Mar ($13.95), a disastrous commingling of fish chunks, peppers, onions, and tequila, served fajita style. The fish seemed a bit old, and the whole ensemble seemed to lack sparkle.

In my estimation, Jalisco seems to be one of those places that certainly has the right idea, but suffers from poor management, or perhaps just a general carelessness on the part of its staff. Its recipes are fine -- the stewed meats, sauces, salsas, rice, and beans are all first-rate. But it's clear that the kitchen skimps on the quality of their meat and fish. And how hard would it be to clean the comal of grease before warming the tortillas on it? Then again, there may be some who do not consider a taco worth eating unless it shimmers with oil. For those of you out there who do, Jalisco is waiting for you.