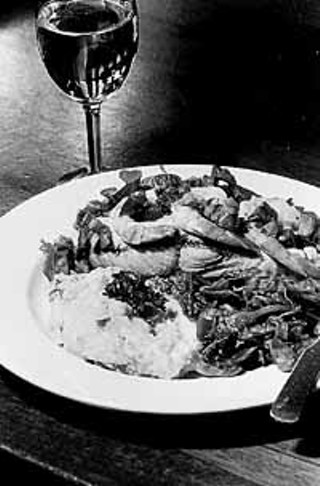 Given the spate of new restaurants to hit our madly expanding town, there's something to be said about continuity. Austin has a number of veteran dining spots, each with its own loyal following, but within this group there are a few exceptional places -- time-tested locales that feel definitively Austin. Generally, when SXSW out-of-towners fill the city, these cherished restaurants become the mythical places of pilgrimage. Austin's racy new dining rooms are forsaken by the "in-the-know" crowd in favor of spots like the East Side Cafe, which in its 12 years of business has come to embody Austin style.

In 1996, I wrote a story about vegetarian dining in Austin for United Airlines' in-flight magazine Hemispheres. East Side Cafe figured prominently in my story; I described the restaurant as "a cozy spot -- where the food is good and the living is easy." I also said that eating at East Side Cafe was a little bit like visiting a favorite aunt in that the renovated 1920s-vintage home that houses the cafe is well-appointed and comfortable, the food fresh and rejuvenating, and the garden a perfect place for a peaceful, pre-dinner stroll. Back then, owner Dorsey Barger characterized her restaurant as "really Austin. We're laid-back," she continued, "but not absurdly so -- down home, affordable, and relaxed." I suppose she might say something identical if asked the same question today.

Of course, things at East Side Cafe have changed since 1996, but in the "if it ain't broke, don't fix it" spirit, much also remains the same. Pollo tortilla soup ($3.25 bowl/$2.25 cup) still shines as a slightly piquant favorite starter. The artichoke manicotti ($11.50 full order; $9.50 half), with its pistachio and sun-dried tomato-studded cheese and artichoke filling, still seduces. And the East Side Choice ($6.50) continues to offer diners seasonal vegetables and garden-fresh herbs paired in simple, satisfying ways.

Among those things that have changed at the cafe, the most obvious is the alteration of the restaurant's physical plan. Gone is the breezy, plant-strewn covered patio, replaced by an enclosed, if somewhat airy, indoor dining wing. Personally, I grieve the loss, and miss the "scratch, scratch, scratch" sound the former patio's plastic drapes made as they billowed back and forth in the occasional breeze. But as Barger explains, "When we measured the loss -- and believe me," she insisted, "losing the patio really felt like losing a little part of me. ... When we measured this loss vs. the gain the new space would mean for our customers, it was the only decision we could make." Barger notes that while there were loyal fans of the outdoor space, many customers were put off by the extreme temperatures outdoors, not to mention the flies, bloodthirsty mosquitoes, and other bugs. "The patio represented one-third of our total seating," she adds. "We just couldn't risk having such a large segment of our clientele dissatisfied with their experience."

Among the menu changes, several new appetizers and pastas have made an entry over the last year, and the restaurant continues to showcase the kitchen's creativity through changing chalkboard specials. A new menu is due out in the fall, featuring a vegan entrée Barger characterizes as "incredibly exciting." For the time being (this being summertime), the cafe lists at least one of its bright, chilled fruit soup creations each day.

As for the restaurant's much-loved garden space, Barger says that the decision has been made to turn the garden beds over in anticipation for a fortified fall harvest. For diners, this means that the homegrown tomatoes, peas, peppers, and eggplant usually enjoyed in late summer will be absent from the restaurant's kitchen. "We had a terrific early summer," Barger notes. "We could figure out a way to water the garden within ration guidelines and keep the plants alive," she continued, "but their production would be almost zero. The plants could survive, but not set fruit, so it's better to gear up for fall."

Of the new tastes I sampled at East Side, my hands-down favorite is the Smoked Salmon Ravioli With Lemon Cream Sauce ($11.50 full/$9.50 half). Although plenty of cream gives the dish body, it tastes light and perfectly summery. The al dente ravioli pockets come filled with smooth ricotta, ribbons of Napa cabbage, and salmon accented with dill. The lemony cream the dish bathes in is further brightened by a slightly sweet relish topping of red bell pepper.

Another winner is the Thai Salad With Asian Vinaigrette ($7.50). Admittedly, when the salad is set in front of me, my first reaction is one of slight disappointment. It doesn't boast much plate appeal -- it looks a lot like a standard bed of chopped romaine topped with grilled chicken -- but the flavor is there. A citrusy garlic dressing that is almost invisible to the eye brings all the elements together, and I was actually disappointed to reach the bottom of the plate.

In the new appetizer arena, East Side offers a Pasta Fritti With Asian Dipping Sauce ($6.95). "Fritti" is Italian for "fried," and the dish involves a handsome helping of fried pasta triangles filled with diced carrot, red bell pepper, and onion. East Side's version of Asian Dipping Sauce is a peanut-based sauce with finely minced ginger floating in the bottom -- smooth, silky, and clinging.

Another new addition to East Side's menu that deserves mention is the jalapeño cornbread pecan stuffing. It isn't Thanksgiving, but how I hope I'll remember this blend when it comes to complementing the annual bird! The stuffing was loose and almost cake-like in its moistness, and it completed a Thanksgiving-inspired entrée of grilled pork tenderloin topped with cranberry port sauce, one of East Side's most expensive offerings at $14.95.

Although I didn't make it to brunch at East Side this go-round, the cafe does a great homemade spread on Saturday and Sunday mornings that includes house-baked bread sliced thickly for French toast, and a luxurious smoked salmon eggs Benedict.

Given its staying power, East Side Cafe is obviously doing something right. You don't draw waiting crowds continually for over a decade without conscious effort. (Incidentally, our wait for a table on our last visit was well over 45 minutes.) The cafe's menu certainly isn't Austin's splashiest, but for many, the cafe simply feels right. There's no place like home.